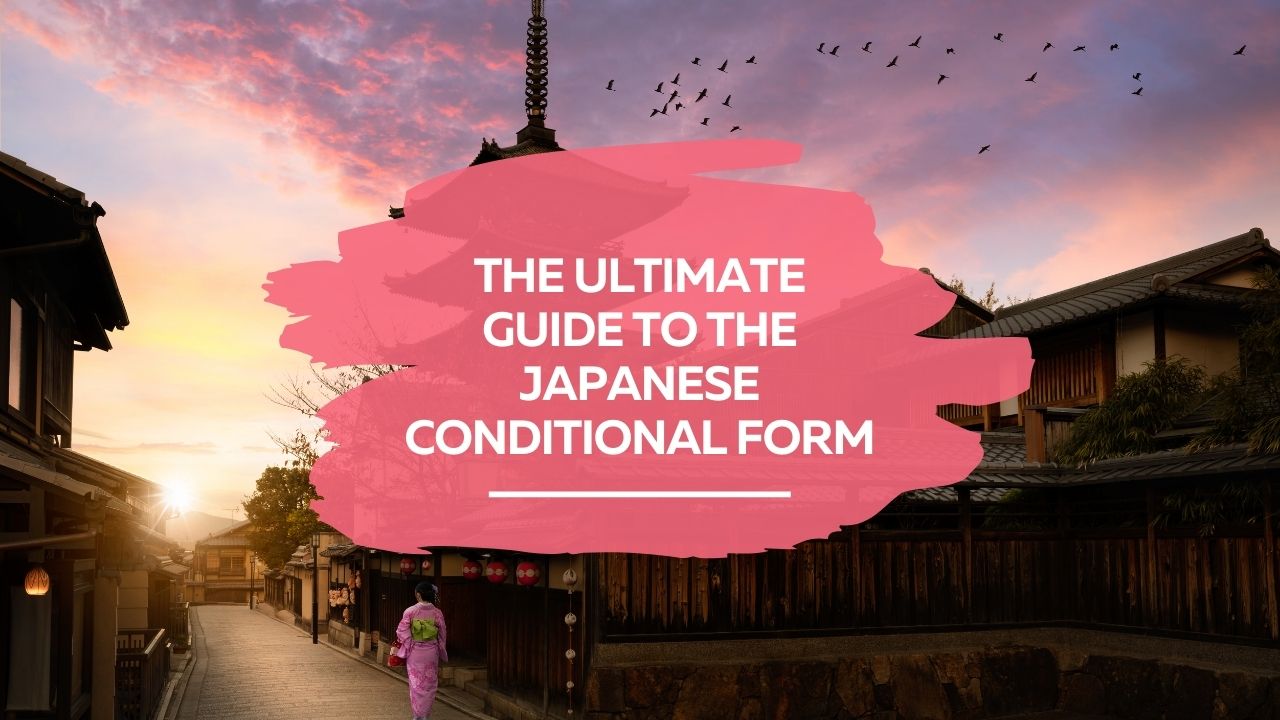 The Ultimate Guide To The Japanese Conditional Form

When you learn Japanese you'll focus at first on learning words and making simple sentences, rather than on the Japanese conditional form.

However, at some point, you will need (and probably want!) to expand your abilities to introduce nuance into your sentences. It can feel very limiting to be trapped with only the ability to say basic phrases or use the simple present and past tenses.

The Japanese conditional form is a fantastic way to level up your Japanese language ability, and the good news is that it only requires your basic knowledge of verb conjugation—which you’ve already been practicing from the very beginning!

What Is The The Japanese Conditional Form?

In any language, a “conditional” is a word, phrase, or construct that places a condition upon the sentence—big surprise, right?

What this means in practice is that conditionals are what are responsible for creating “if > then” ideas or introducing the concept of “if” in general.

For example, “If I eat that whole pie, I’ll be full.” The part about being full is conditional based upon the rest of the information—that it’ll only happen if you eat a whole pie.

Conditionals can be used to express statements like this, as well as to describe how some actions influence other actions or how events in the past have shaped the present.

Using conditionals, you can also talk about hypothetical situations or the context that determines the choices that you make.

Are Japanese Conditionals The Same As In English?

The short answer is not really.

In English, the word “if” does a lot of the heavy lifting when it comes to creating conditional constructions; everything from “If he goes, so will I” to “This wouldn’t have happened if I had just gone home straight away” are all predicated upon that ever important word: if.

In Japanese, it’s not quite as simple as just introducing a single word. Instead, Japanese uses a variety of verb conjugations or particle + additions to convey this idea.

The good news is that while that means a bit more learning on your part right at the beginning, you don’t have to worry about shifting around the word order of the sentence (like you would in English). Just conjugate or add correctly and off you go!

The Use Of と To As A Conditional Particle

When it comes to the Japanese conditional form, one of the biggest influencers is the oft-unnoticed particle to. Simply add to after your base verb form to convey a variety of ideas:

Sequential Actions In The Past

In all of the situations above, you can see that the base form of the verb (which ends in -ru or sometimes -u) remains as it is, unconjugated. It is then followed by to before introducing the part of the sentence that is based upon the first statement.

In the majority of cases, you can think of “base verb + to” as “because of X,” and the rest of your sentence becomes “Y happened.” Like so:

Hypotheticals are your most common “if” scenario. These are the sentences that propose an idea that has not yet been realized or come to pass.

For example, “If I throw this ball too hard, it will go over the wall.” The ball hasn’t been thrown yet; this event has not yet been realized in the scope of reality.

In order to achieve this type of construct in Japanese, you can conjugate your verb using -eba.

-Ru verbs tend to be fairly simple to conjugate, and the conditional is no exception. Simply replace the stem -ru with -reba instead!

Consider how other -ru verbs conjugate for practice:

-U verbs, as normal, follow different rules than their -ru counterparts. In this case, simply replace that final “u” sound with -eba instead!

In the example above, you haven’t taken the medicine yet—but if you did, you’d probably feel better!

More examples of -u verb conjugation for hypotheticals include:

Adjectives Work With -Eba Too!

That’s right! Your ability to use hypotheticals is not limited only to verbs – it works with Japanese adjectives too.

For -i adjectives, replace the last い (i) with ければ (kereba), like so:

For -na adjectives and nouns, you can simply attach であれば (de areba) in the same way that you would attach ではない (de ha nai) or じゃない (ja nai) to make the utterance negative.

The verb conjugation -tara is a great way to create if > then phrases in Japanese, and it’s simple to create to boot! You already know how to make Japanese past tense, right?

In informal Japanese, your past tense will always end with -ta or -da, like this:

From here, all you have to do is add a simple -ra on the end and you’ve created this conjugation!

In the same order as “if…then,” your -tara phrase should come first in your sentence.

In some situations, it is the context that determines whether something happens. These scenarios are called contextual conditionals; they refer to times when you are being specific that in this particular situation only, “if X, then Y.”

For example, saying “If it gets cold, I want to eat hot pot” can be interpreted two different ways depending on which conditional you choose.

Using -tara, as described above, means something along the lines of “whenever it gets cold, I feel like eating hot pot.” This is a generalized statement to describe your overall sentiment. You like eating hot pot whenever the weather starts getting chilly.

Consider how the meaning changes if we use nara.

On paper, the translation doesn’t change. But the implication does—now you’re saying, “Specifically right now, you are asking me what I want to eat. At this moment, I want to eat hot pot, but only if it gets cold outside. Otherwise, I have a different answer.”

Nara is tied to very specific circumstances, and -tara is a generalized “if > then.”

In this example too, you can see the difference; it’s not true (at least probably!) that you’ll go everywhere that Ken goes all the time. However, in this particular instance, if (and only if) Ken goes will you go as well. Your “if” is predicated on this specific situation.

Don’t Be Afraid To Experiment With The Japanese Conditional Form

The reality is that learning any language takes time and practice—which includes immersion. Just throw yourself out there and give the Japanese conditional form a try! To support you in the process, use the StoryLearning® method so you can learn Japanese grammar through stories, not rules.

It may be easiest to pick one type and start to incorporate that into the way that you speak. As you become more familiar with it, you can start to add in the others until things seem natural.

Don’t give up; the building blocks that you’re laying down right now are forming the foundation of a house that you can use for years to come!