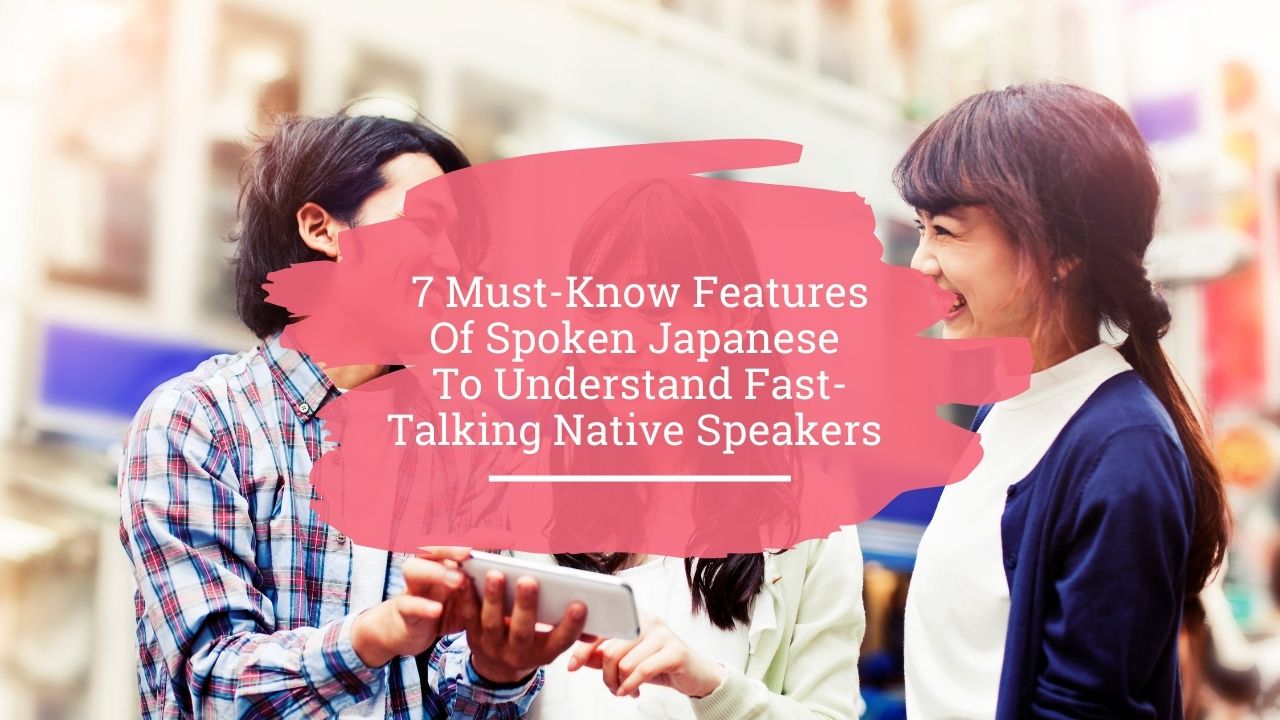 If you're learning Japanese, then you've probably noticed that spoken Japanese can be tough to understand! Native speakers talk so fast and it can be hard to follow what they're saying. But why?

Well, have you ever considered that these two activities in general—speaking and writing—are in and of themselves different?

Japanese is not the only language to change and adapt to the differing needs of spoken and written usage.

You may have taken the first step toward learning a foreign language by writing, with textbooks and written exercises meant to test reading comprehension and handwriting.

But as you develop and grow in your Japanese language skills, you will need to embrace the spoken aspect of the language from both a listening and practical perspective.

In order to do that successfully, it’s important that you keep in mind the many ways that spoken Japanese may be different than the written Japanese you’re used to.

The following 7 features of spoken Japanese are different than its written counterpart. And knowing about them will help you understand Japanese much more easily the next time you're chatting to Japanese friends or listening to podcasts.

For a quick overview of these 7 features of spoken Japanese, check out the infographic below. And then keep scrolling for more details and examples of each one.

If you break apart the word “homophones” into its basic pieces, you’ll see that it means things that “sound the same.” In other words, homophones are two words that do not mean the same thing, but when pronounced, they sound exactly alike.

In Japanese, homophones are extraordinarily common; this arises due to the regularity and consistency of Japanese sounds.

While English has complex strings like “sch” and “ough” that can make similar-looking words sound different, Japanese is always the same in its pronunciation of a relatively small number of total sound pieces, making homophones a frequent occurrence.

Consider what happens when you’re listening to someone speak and they say the word kanji. Do they mean 漢字, the Japanese characters, or 感じ, as in a feeling?

Not only are both of these identical in sound, but they are both nouns as well, which makes their interpretation rely on active listening and context clues that are occurring in real time.

Other examples of homophones are 者 and 物 (mono), or person vs. thing, and 早いor 速い (hayai), which is early vs. fast.

In many languages, onomatopoeia exists in order to convey sounds using letters. Think of English words like buzz and zing—words that sound like the event they’re describing.

In Japanese, you will need to contend with these in spoken language as well. Some examples of Japanese onomatopoeia are:

You are much less likely to encounter very casual language in written Japanese like you will in spoken Japanese.

Consider this: in English, it’s very easy to say “Nah, dun rully feel like it,” with its characteristic slurs and cut-off pieces of words. Even if you wrote this out in a casual manner, you would still write, “Nah, I don’t really feel like it.”

The spoken variant is significantly different than its equivalent written form, and the same thing happens in Japanese too.

Consider the Japanese sentence, “What are you doing?”

Notice how this written variant, is very formal and contains particles (wo, ka) and full conjugation (desu instead of da). This is a standard Japanese sentence of average formality.

This would not be an uncommon utterance at all and is the same sentence as the first, only spoken casually. Many important pieces are missing, like the particles, most of the conjugation, and even the question particle ka at the end.

If you're equipping yourself to speak and listen to Japanese, you must be prepared to notice and interpret these shorthand phrases and how truncated “standard” Japanese can become.

You may even see some of these shortening methods, such as -ssu in place of desu or suimasen instead of sumimasen, referred to as “contractions” in Japanese.

Slang can exist in written form, but it's much more common when spoken. Learning Japanese slang and expanding your vocabulary specifically for oral use can really level up your Japanese and make you more fluent and natural as a speaker.

Doing so will also equip you to field any unusual slang that you may hear during conversations!

Helpful slang to know include:

#5 The Influence Of Japanese Dialects

As you may have guessed from the slang above, Japanese can be diverse in its spoken variant.

This includes Japanese dialects that impact not only the rough sounds of the language’s phonemes themselves but also the specific words chosen in certain contexts.

Much like the choice between “pop” or “soda” in the United States, different areas of Japan will use different spoken words and sounds.

It's best to focus on learning more about the specific slang and dialects of the area that you live in or are most interest in among Japan’s many regions.

However, for an overarching view, know that Tokyo-ben (Tokyo dialect) is the most “standard,” so a lot of the slang that you pick up from anime will be Tokyo-ben. This includes, for example, すげーsuge-, which is an altered and casual version of sugoi (amazing).

The other most “notorious” dialect you may encounter is Kansai-ben, from the Kansai region of Japan. Kansai-ben speakers are famous for their swapping of hen for masen in words, such that 分かりませんwakarimasen (I don’t know) becomes wakarahen instead.

Yes, these are definitely a thing in Japanese! Puns, called dajare, are wordplay that created its own subset of joke types called oyagi gyagu, or “middle-aged man gags.”

These types of wordplay rely on ambiguity and nuance in the Japanese language in order to work, and they only work orally.

For example, consider how your meaning may be misinterpreted if you blankly, without pause, said:

This cannot even be written in Japanese characters, because doing so gives away the gag! This sentence can be translated as both “I made break” and “I ate pants” depending on when you take a small pause.

This comical wordplay can only exist in spoken Japanese.

#7 Filler Words And Words Of Pause

One of the most notorious aspects of spoken Japanese—and one that many new speakers will get caught up on(!)—is filler words.

In English, these are words like “uh” and “uhm” that are used to fill gaps while thinking. Sometimes, these words can also be used to express concern, awkwardness, or uncertainty about something that someone has just said.

Japanese has these sounds of their own, and many new speakers get hung up here because they simply select their native pause sound or choose a new one.

However, it’s important to remember that filler words already exist, and you should choose from among them in order to make it a habit!

One of the most common mistakes that new speakers make is to try to combine their native English “uhhh” sound with the most common Japanese filler, “eeto,” to create “ee….”

This is a filler on its own, but it does not mean “um.” Thus, the new speaker seems unusual for using a “surprised noise” (ee) as just a regular pause in a sentence.

Spoken Japanese Doesn’t Have To Be Scary

You might be feeling intimidated by how much spoken Japanese differs from the written words you’re probably used to.

However, the spoken aspect of the language doesn't have to be complex. In fact, the best way to learn spoken Japanese gradually is to incorporate it alongside everything else that you're learning rather than treating it as its own entity.

When you do this, not only do you become a more well-rounded language user, but you also gain a more nuanced understanding of how the language works—because you can identify what changes between written and spoken Japanese.

As always, the best way to get better is just to immerse yourself. Listen to Japanese podcasts for instance or watch Japanese shows on Netflix. Or even better, apply the StoryLearning® method and read and listen to stories at your level.