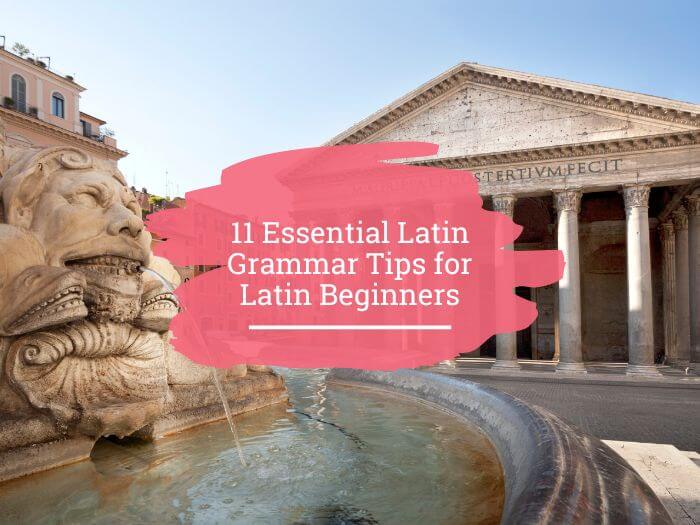 When you learn Latin, or any language it’s fairly uncommon to get excited about grammar, Latin grammar included.

There are people who know it and follow it, others who scorn it, and others who just don’t know it. Unfortunately, grammar is a necessary evil when it comes to learning languages and Latin is no exception.

Reading this article will help you out by pointing out some basic grammar tips for Latin. This will give you a good foundation to work from when you are starting out or even considering learning Latin.

1. There Is No Strict Word Order

Something that's very different from English and even Romance languages that Latin is related to, is that there is no real word order requirement.

There are some patterns that Latin sentences tend to follow that will be important to recognize.

Because Latin does not have any real word order beyond loose patterns, that means Latin words change their endings to indicate how they are being used in the sentences. This is what makes Latin what is called an inflected language.

This means when a noun or a pronoun is used as a subject it has a different ending than when it is being used as a direct object in a sentence. Similarly, adjectives will change their endings to match the noun it is modifying and that noun’s use in a sentence.

Each of the unique endings, in addition to the word meaning themselves, are helpful in determining the part of speech the word is. Nouns and adjectives have distinctly different endings from verbs.

3. Latin Does Not Use Definite Or Indefinite Articles

Unlike many languages, Latin does not have definite or indefinite articles. This means there is no word for “a” or “the.” As a result, when you write “the girl” in Latin, there is no way to say “the” so you would only write “girl.”

Obviously it works the same in the opposite direction. When you see puella written out, you need to supply either an “a” or “the” to get “a girl” or “the girl” to correctly render it into English.

An example of these words’ endings changing is to indicate a change in number. This is simply the difference between singular and plural.

Verbs, nouns, adjectives, and pronouns all have singular and plural forms that will be used.

One of the ways that endings will change for nouns, adjectives, and pronouns is due to the grammatical gender.

Many languages have the grammatical genders of masculine and feminine. Latin grammar has a third gender of “neuter.”

These different grammatical genders will have some endings that are unique to them and need to be able to be recognised when you are using Latin.

Finally, there are five cases that are used to show how nouns, adjectives, and pronouns are being used in sentences. This is the final way that these words will have their endings change. The cases are Nominative, Genitive, Dative, Accusative, and Ablative.

When forming a Latin verb, you will be able to decide between three persons as the subjects for the verb. Essentially three persons to complete the action.

Simply enough, these persons are referred to as 1st, 2nd, and 3rd person. All of these may be familiar when talking about literature and points of view.

Although there are three persons, there are technically six options for persons based on being singular or plural. See the chart below to see how the six options are presented typically in Latin grammar:

3rd person in Latin can also be paired with expressed nouns, such as “the girl.” If the girl (or many girls) is doing the action, the verb would be working in 3rd person.

Unlike most languages, Latin subjects don't need to be expressed in sentences. Often that ending of the verb will tell you who is doing the action.

For example, if I want to say “I run” I could write Ego curro or just curro. The –o ending in the verb curro indicates that the subject is “I.”

In Latin grammar there are six different verb tenses to indicate when the action is taking place.

10. Latin Has Active And Passive Voice

11. There Are Always Exceptions In Latin Grammar

While Latin is no exception to having grammar rules, there are several exceptions to Latin grammar.

As you continue to learn Latin grammar, there will certainly be things that may challenge the tips above.

There are irregular verbs that do not form the same way as your typical verbs. There are verbs that look passive but actually act like active verbs. The list goes on!

So keep in mind that these tips are not rules that are cemented and unchanging, there will always be exceptions. Embrace these exceptions and don't let Latin grammar (and the grammar villain) get you down!

While this is a helpful place to begin, keep in mind this is not an exhaustive list of Latin grammar tips.

There are many more aspects to Latin grammar and syntax that you have yet to unlock.

Take these insights to start your Latin journey and from here you have a solid foundational understanding of Latin grammar!

And if you're looking for a more natural way to learn Latin grammar, without memorising rules, then follow the rules of StoryLearning® and read Latin books.

Before you know it, you'll have internalised these Latin grammar rules and you'll be reading and using grammar like an ancient Roman!