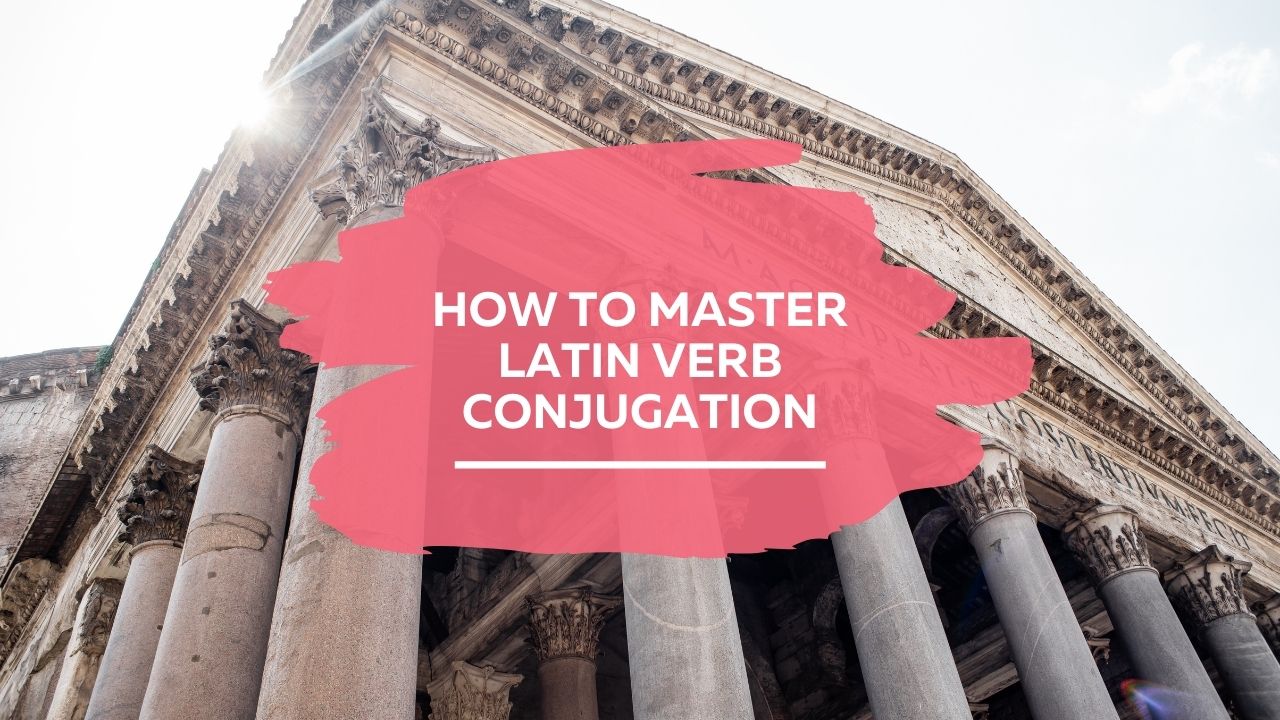 How To Master Latin Verb Conjugation

Verbs can be tricky in any language and when you learn Latin, you'll soon see that Latin verb conjugation is no different.

You have infinite tenses, voices, and oh so many irregularities and exceptions to the rule.

However, the best way to cope with this trying part of speech is to get to know this demon and exorcise it!

By the end of this post, you'll not only know what conjugation is and how to conjugate a verb but you'll also be equipped with tips and tricks that will help make verb conjugations as easy as unus, dua, tres.

What Is Latin Verb Conjugation?

Before going further, what even is a conjugation? Technically a conjugation is just a grouping of verbs that are similar based on patterns in endings and how they are formed.

If you're learning Latin in school, you may be asked to “conjugate” a verb. This essentially means that your instructor wants you to give all forms of the verb in a particular tense.

So in English, you may be told “conjugate ‘to love.’” In response, you would say: “I love, you love, s/he/it loves, we love, you all love, they love.” Boom – conjugated.

Back to Latin. Latin verbs fit into one of four conjugations. You can recognise a verb’s conjugation based on its infinitive form.

When looking at the dictionary form or principal parts of a verb, you will look at the form that ends in -re. There are four forms of the infinitive: -are, -ēre, -ere, -ire.

For the verb “to love” (amo, amare, amavi, amatus) you would look at amare. Since it ends in an -are, it is a part of the first conjugation.

These conjugations help you determine how to form the verb based on its unique pattern. See the chart below to see all conjugations.

**Take note: there is a subcategory of the -ere 3rd conjugation, called the Third -io conjugation. There are verbs whose first principal part ends in an -io.

Something that does set Latin apart from many Romance languages is that they have no need to include a subject or personal pronoun.

In English, if you wanted to say “I love” you need to use “I” for the sentence to be complete. In Latin, a subject is only used for emphasis. So to say “I love” in Latin, all you need is the correct form of the verb: amo.

While you do not need them, keep in mind when conjugating a verb, it will be organized according to person and number.

Person is broken down into First Person (I, We), Second Person (You, You all), and Third Person (S/he/it, They). The number refers to whether the verb is singular (I, You, S/he/it) or plural (We, You all, They).

Latin loves irregulars. Typically irregular verbs are the verbs that are most commonly used.

Why? Because you use them more frequently and they will change as people use them over time – this happens frequently with English verbs.

The Latin word for “to be” is an example of an irregular verb that has been “driven” over many centuries by people using and changing the word.

For regular verbs, there is a pattern that all conjugations follow:

Then based on the conjugation the verb is in, you need to decide your vowel. Reference this chart to find the right vowel.

After adding your vowel to your stem, you are left with adding the present tense endings:

However, keep in mind there are some distinct exceptions with the first form, which is the “I” form. Since the ending is already a vowel, for the first and third conjugation, you do not need the vowel.

These exceptions are bolded in the charts below so that you can see where they are.

So now you know the basics for forming Latin verbs in the present tense across all verb conjugations.

Now here are some tips and tricks that can help cement these conjugations in your brain so that you can become more fluent in Latin!

While the endings may seem random and decidedly willy-nilly, there actually are patterns shared within and between tense endings.

Looking at the present tense endings you can see similarities shared between the persons. For example, both “You” and “You all” forms end in an –s. Similarly, for “S/he/it” and “They” forms, they end in –t.

This pattern can actually be seen for these persons in most tenses beyond the present tense.

While it may seem silly to use formulas when talking about a language, it is actually a very logical and helpful way to think about Latin and its verb conjugations.

Even though there are exceptions to the rule, you will be correct 90% of the time if you make sure you memorize the formula:

This also applies to the other tenses. Each tense has its own unique formula that most, if not all, verbs follow.

While these can be super annoying in any language, don't forget about irregular verbs. Remembering that these exist can really save you some brainpower when you are translating.

For these, it is just best to memorize their forms. Even though they are irregular they do actually often follow particular patterns.

Some people memorize things differently. Repetition is the key to success in any language! To help you better remember endings, you can use and/or create some sort of mnemonic device!

In addition to repetition being key, so too is exposure! Reading and practicing with real Latin texts will help you recognise verbs and verb conjugations.

Besides, reading in Latin or improving your reading skills in general is probably why you chose to learn Latin.

You can even go a step further to identify the verb, give all the information such as tense, person, and number, and then create a conjugation chart for this verb.

Try to find some Latin text on what you like – consider finding a mythological story by Ovid or war stories by Caesar! And be sure to apply the 10 rules of StoryLearning® so you choose and use the right reading material for you.

While Latin conjugations, like the language itself, may seem really intimidating, it all boils down to knowing how they work. Once you get that firm understanding, you will be able to easily create and recognise all verb forms.