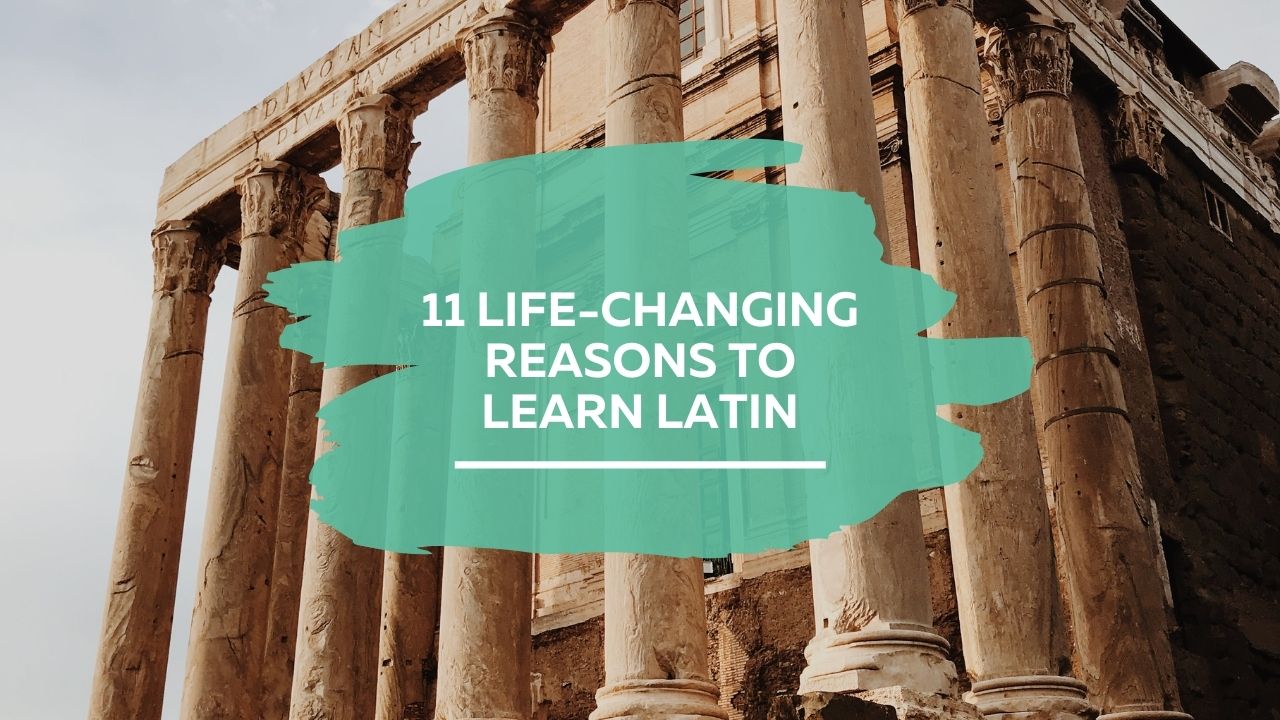 Whether you have the opportunity at school or even on your own, there are plenty of reasons to learn Latin.

The language of the ancient Romans, the Catholic church, and even of pop culture’s witches and demons, has many uses. So it's no-so-dead after all!

By the end of this post, it’ll be clear to see why you should take the leap and learn Latin.

Did you know over half of English words come from Latin origins?

Latin is the parent to the other Romance languages, such as Italian, Spanish, French, Romanian and Portuguese. So many loan words in English come from these languages, often through their Latin roots.

More often than not, if you come across a difficult word in English, breaking it down and seeing its Latin root can help you figure out its definition. Or at least its basic idea.

Consider the word “maternity.” Many people know this word due to hearing it in certain contexts. But someone who paid attention in Latin 1 will recognise the Latin word for “mother,” mater.

2. It's Easier To Learn Other Romance Languages With Latin

While so much of English vocabulary comes from Latin, Romance languages, which directly evolved from Latin, owe most of their vocabulary to their Latin roots.

Words, such as “water,” or aqua, in Latin are easily found in their Romance counterparts. Spanish and Portuguese’s agua, Italian’s acqua, Romanian’s apa,and even French’s eau.

Beyond the vocabulary, typically the grammar is similar and easy to adjust to. Once you get Latin down, it becomes second nature to see the similarities of the other Romance languages to it. Then you're on your way to mastering all of the Romance languages.

3. Latin Makes It Easier To Learn Any Other Language

Latin helps the everyday person much more easily become a multilinguist in general!

Learning Latin will often focus on minute details of grammar and vocabulary. This trains your mind to look at languages in a logical way, making it much easier for you to understand how other languages work!

After learning about what cases are, non-Romance languages, such as German, Icelandic, or even Japanese, grammatical cases make much more sense.

This allows you to learn these languages faster because you already have a grasp on grammatical concepts that would have made it more difficult without knowing Latin.

4. Latin Prepares You For Many Professions

Many different professions also utilise words that come directly from or actually are in Latin.

Medical terminology borrows words from both Latin and Greek. For example, carpal tunnel, which is the nerve suppression due to pressure at the wrist comes from the Latin word carpus meaning “wrist.”

Scientific names for species of animals, plants, etc. are in Latin. It's the same with the abbreviation for the elements of the periodic table. Many legal terminologies, such as habeas corpus, are direct phrases from Latin.

5. Latin Improves Reading And Writing In Your Own Language

When learning Latin there is such a focus on grammar, that this helps you strengthen your knowledge of your own language.

After learning Latin you will understand better how to put words and sentences together so that they not only make sense, which is pretty important, but also so that they are more powerful and make you sound even more intelligent – a nice bonus.

Due to knowing Latin roots, it will become easier to read, recognizing more difficult words. Beyond even knowing the vocabulary, more complex sentences will be easier to understand the first time around, reducing the number of times you need to go back and reread sentences.

You will be able to read more difficult books, novels, and articles because of it. You will become faster at reading and, if you don’t already, will enjoy it, too!

6. Learn The History And Culture Of The Romans

Much of Roman history and culture is argued to be the foundation of western culture and thought. That is technically a very controversial thing to say, but you can’t ignore when the similarities are seen.

The most obvious and popular example is government names and structures! The concepts of republic, democracy, and even symbols, such as the eagle and fasces, come from Roman and Greek origins.

You will be able to now know what these mean and why they are significant.

Besides the argument about the relation to western culture, Roman history and culture is just pretty interesting, right?

Consider the myths involving the gods and heroes (some admittedly borrowed and slightly changed from the Greeks), the battles and wars fought, political intrigue! Need I go on?

Learning Latin will expose you to many aspects of Roman history and culture!

When learning Latin, it's often unavoidable that you will run into works of Roman literature as well as philosophical thought.

A benefit of being a dead language is the speed at which you are exposed to real Latin! With other languages, you will have taken over two years of the language before reading real authors and their works.

In Latin, you are easily able to begin reading true works of Latin literature and philosophy even within the first year of learning it. Perfect for applying the StoryLearning® method. Although the philosophy may not make sense even to the best of us.

8. Develop A Systematic Approach To Thinking

Because you would be learning a dead language when taking Latin, it will cause you to look at language in a completely different way.

Many modern languages are taught through exposure and repetition of phrases and sentences until it feels natural. Latin, however, is much more systematic in the approach to learning it.

Latin is a very organized language, which makes it a great language to learn for you if you are not great with languages or prefer math, science, and other STEM-type subjects.

Learning Latin helps you to approach not only languages but other subjects and topics in different ways than you would normally, improving your thought process and logic skills.

For most countries and cultures, LATIN IS EVERYWHERE. I mean it.

You can see Latin in the mottos of schools, countries, and on US state flags. Michigan’s coat of arms: Si quaeris peninsulam amoenam circumspice translates to roughly “If you are looking for a pleasant peninsula, look around.”

On America’s one-dollar bill is the common phrase e pluribus unum, meaning “out of many, one.” Even the concept of placing important figures on currency is argued to be inspired by the Romans’ coins.

By learning Latin you'll be able to spot these and actually know what they mean.

In a direct way, Latin will help you with recognizing Latin roots in more difficult words. This will improve the reading and writing portion of any standardized test.

Some standardized tests even include grammar portions. Your knowledge of Latin will help you to improve those parts of the test.

In addition, due to Latin giving you a systematic and logical thought process, Latin can help you better understand the questions. And equip you with knowing how to approach them during the test.

Your analytical skills from learning Latin will no doubt help you improve your overall test score, not just the English portion.

11. Improve Your Chances Of Gaining Entry To Law/Medical School

If you plan to apply to law or medical school, having learned Latin will give you a leg up.

As discussed earlier, much of legal and medical terminology comes directly from Latin and Latin roots. This will show that you already have a grasp of many of the terms and vocabulary that you will see in your studies.

To boot, Latin is not easy. It will show admissions for your school of choice that you are ready for the challenge of medical or law school.

In addition, the analytical skills and systematic-thinking skills that Latin has equipped you with will make you a great candidate in the eyes of an admissions board.

Especially for law school, when learning Latin it would not be uncommon to have read and analyzed examples of Roman oratory and speeches. This would be very beneficial if you plan to become a trial lawyer or even continue on to join politics.

Why should you learn Latin? This was just a list of the many reasons why you would want to learn this “dead” language.

No matter what you want to do with your future, Latin helps prepare you for so many things in life. If you just truly love languages, or if you need help with finding different ways to look at problems, Latin will help.

Plus, when watching your favourite supernatural show that incorporates Latin, you can critique just how badly they are at pronouncing it!

In the end, Latin can be difficult to learn. But once you get your sea legs, it's such an enriching and lasting benefit for you and your life.