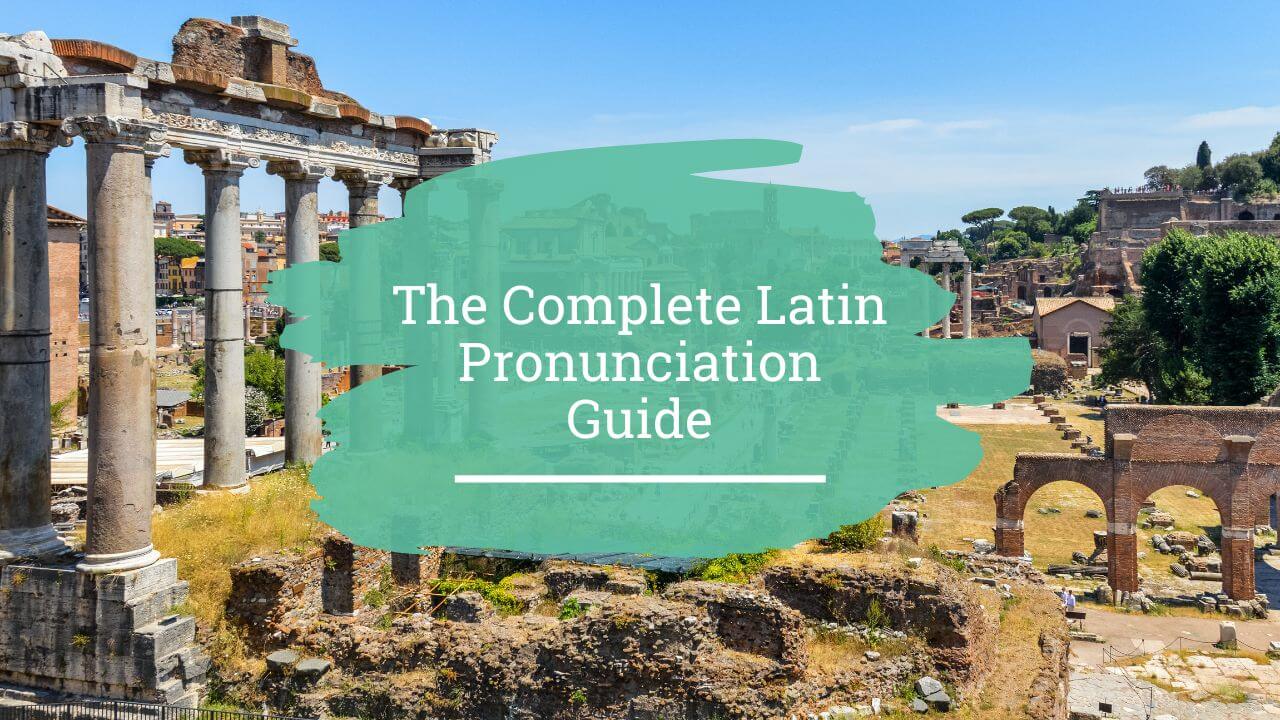 When you learn Latin, just like any language, you need to get your tongue round Latin pronunciation.

Starting to learn a new language and trying to speak it, you can feel a little silly and awkward. Part of mastering a language is to speak the language aloud, gaining more fluency as you go along, Latin is no exception. Don't let your lack of confidence get in the way!

The Latin alphabet is very similar to the English alphabet with three fewer letters, leaving it with 23 letters total. More or less many of the sounds that Latin words comprise are already familiar to any native English speaker.

Arguably, Latin pronunciation is much easier than English as Latin has far fewer exceptions and variability in its pronunciation.

Reading this article will help you get a leg up by being able to accurately pronounce Latin words like an Ancient Roman.

How Do We Know How Latin Is Actually Pronounced?

A major question that people ask students of Latin is, how do we actually know how Latin was pronounced? That is a fair question considering it's a dead language.

As a result of it being a dead language and being impacted by the ravages of time, there are technically four different ways that Latin can be pronounced.

While it may seem questionable that we're able to truly know how it was meant to sound, there are scholars of the Ancient World who have worked on reconstructing the pronunciation of Latin, such as W. Sidney Allen in his Vox Latina.

There are several different sources that have helped in this work:

Other Forms Of Latin Pronunciation

The other three ways of pronouncing Latin are based on the time they were used in history, which was before the work of Vox Latina in 1965.

Church Latin is Latin that is frequently used in the Catholic church and takes a lot of its pronunciation from Italian.

Northern Continental Latin was used by early scientists and is used for some scientific terms.

Consider the fact that Julius Caesar would have been pronounced by Romans as Yoo-li-uss Kai-sar while English Latin pronounces it as Joo-li-uss See-sar. Pretty stark difference.

For the sake of the average Latin learner, I'll be focusing on the Ancient Latin pronunciation as it's actually the easiest with the least amount of exceptions. The Ancient Romans actually had a very standard pronunciation since their alphabet is phonetic.

Unlike the English vowels, Latin vowels are actually expressed as either long or short. Beyond this, there is never any variation in the pronunciation of vowels. In most printed texts, long vowels will be marked with a long mark or macron.

Latin contains the same vowels as English: a, e, i, o, u. For the most part, they are mostly pronounced like English vowels depending on their length.

Similar to Latin vowels, Latin consonants are also very consistent in their pronunciation.

More so than not, Latin consonants typically match English consonants, with some exceptions outlined below. In addition to these exceptions, Latin does not have the English letters ‘J,’ ‘W,’ and ‘Y.’ You will see below how the sounds of ‘W’ and ‘Y’ are made using other consonants, while the sound of ‘J’ is absent completely.

While technically part of the Latin alphabet, ‘K’ is uncommon in Classical Latin and seemingly was replaced by the letter C’’ since they are pronounced the same way. When ‘K’ is used, it is at the beginning of a word, such as kalends (kah-lends).

Latin also has several diphthongs, which is just a fancy word for two vowels coming together to form one sound.

Consider the English words “coin,” “author,” and “cloud.” Each of these have diphthongs, /oi/, /au/, and /ou/, respectively. These sounds, while formed by two vowels, create only one sound.

There are numerous other diphthongs in English but they are not all spelled out in the words. Fortunately, Latin is much more transparent with its diphthongs. Latin has six sets of diphthongs: /ae/, /au/, /ei/, /eu/, /oe/, and /ui/.

In order to help you recognize how to put these sounds together, you need to know how to break Latin words down into their syllables. This is actually rather simple.

Latin syllables will start, for the most part, with a consonant and end with a vowel. For example, the word cūra (care) is formed by two syllables: cū-ra.

In addition, if there are two vowels next to each other that don't form a diphthong, they are two separate syllables. In this case, the second vowel will be the next syllable.

For example, the word audiō (I hear) is formed by three syllables: au-di-ō.

Another rule to know is that double consonants will split with one consonant ending the previous syllable and the second starting the next syllable. For example, the word bellum (war) will split the /ll/ into two syllables: bel-lum.

When Two Vowels Are Not A Diphthong

Finally, while you may encounter two vowels that may look like a diphthong, they may not actually be a diphthong. Confusing? Not really!

For example, the word aureus from above looks like it contains two diphthongs, /au/ and /eu/. When you look at the word’s stem, it ends at /e/, aure- while the ending is –us. This means that the –eu- is not a diphthong but instead two separate vowels in different syllables. Thus it is broken up into au-re-us and not au-reus.

You might be asking yourself, well if Latin is a dead language, why does pronunciation matter? As a Latin learner, you know that Latin isn't necessarily easy to learn. And you have enough on your plate with Latin verb conjugation or Latin past tenses to master.

Well, while it is a dead language, there is a standard way of speaking in Latin that is internationally recognised. In order to be able to communicate about or in Latin, you'll need to accurately pronounce Latin!

There are different ways in which you can practice speaking in Latin to get your pronunciation just right. You can speak with other Latin learners in your class if you're learning in a school setting.

For those of you who are not, there are several different videos online of people reading aloud pieces of Latin. You can use these videos to help you by following along with the video or reading aloud on your own and going back to the video to reference the correct pronunciation.

While perhaps speaking Latin may be intimidating, the great thing about its pronunciation is its consistency. There are few exceptions to these rules stated above, compared to English.

This can be mostly attributed to the fact that English has leaned upon many other languages in its creation with roots from several distinct origins. Once you practice this and start to recognise how to form these words it will become second nature to read Latin books and speak as an Ancient Roman would.