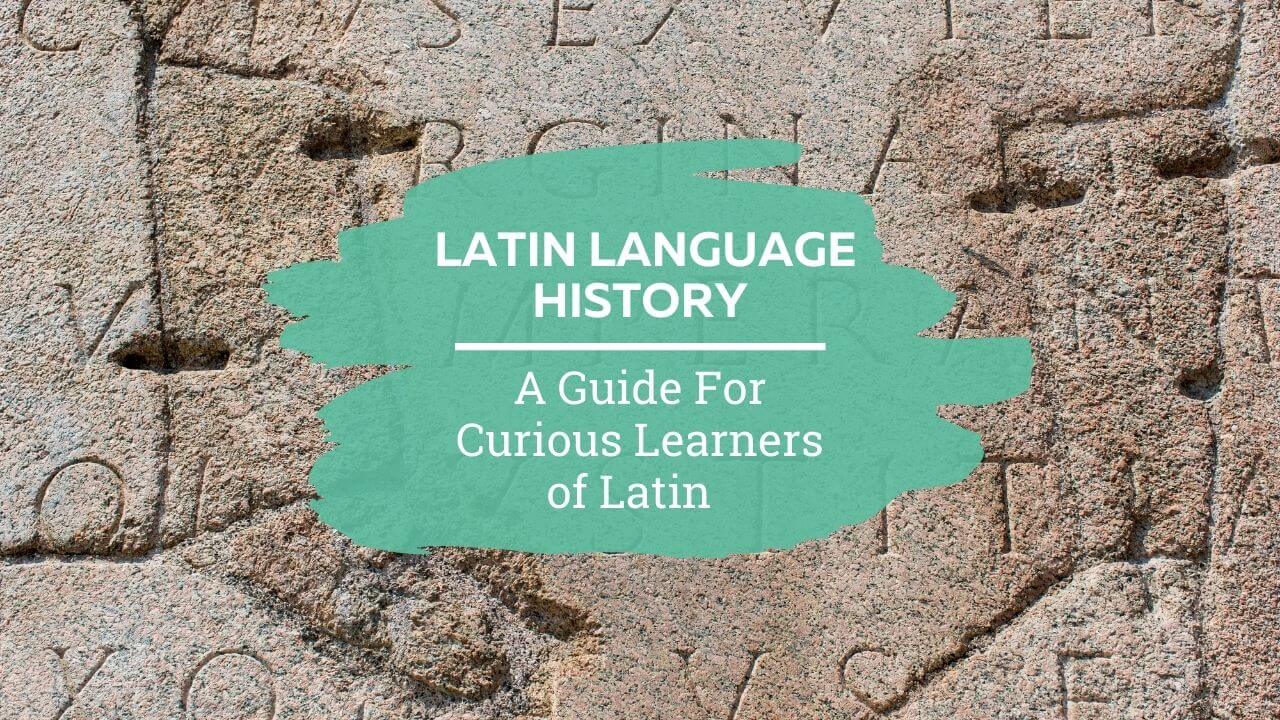 So we know Latin is ancient, right? It’s a dead language! But part of what makes Latin so interesting is Latin language history. While no-one uses Latin in day-to-day communication, it still has such an important role today as it did in the past.

Instead of focusing on how to learn and use Latin, I'll be focusing on Latin language history. Its history is not only interesting. But it will also help you understand how important Latin is for western history and today’s society.

This article will help you to understand:

So let's take a look at Latin language history.

Where Did Latin Come From And How Did It Develop?

The exact origin of Latin is unknown. Think about it. The Latin associated with Caesar, is what is considered “Classical Latin” used around the 2nd and 1st century BCE. This is by no means the earliest form of the language.

Latin’s oldest version is known as “Archaic Latin”. It was spoken around the lower parts of the Tiber River, including where modern Rome lies.

As the city of Rome developed and eventually gained power, other languages of the Italian peninsula impacted Latin. One such example is Etruscan. This language is a mystery in itself as it does not seem to be related to other known languages beyond its influences on Latin.

Due to the geographic proximity, Etruscan had a very large influence on the development of Archaic Latin, both spoken and written, around the 7th century BCE.

As Rome continued to develop, by the late 6th century BCE when Rome had become a republic after overthrowing its kings, Latin had been developing as well.

By the time of the later 2nd century and early 1st century BCE, Latin had developed into what is known as “Classical Latin.”

Typically, this form of Latin is the Latin associated with the golden age of Latin literature from Roman poets, philosophers, and orators, such as Ovid, Virgil, and Cicero.

Thus, this is the form of Latin schools most often teach. That means the Latin people have in mind when thinking of Ancient Rome are thinking of a language that is already at least 600 years old!

Latin was spoken in all parts of Europe, the Mediterranean, and the Near East due to military expansion. In the 2nd century, Latin started changing and developing into what is known as “Vulgar Latin”.

This is a form of Latin infused with aspects of other European languages, such as Celtic, Gaelic, Germanic, and other local languages. This is the form of the language that will eventually evolve into Medieval Latin.

In the Medieval and Renaissance era, more educated classes and the church continued to use Latin. It remained the language of education as Latin and Greek were the languages of the Classical world.

Thus Latin became lost to the common folk, leading to the development of local Romance languages. And Latin became the language of Christian texts, international relations, and for classical European education.

Since fewer people were actually speaking in Latin, the language changed and often became altered to match the grammar and syntax of other European languages.

These forms of Latin are different enough from Classical Latin that there are separate courses at the collegiate level for learning Medieval Latin.

Evolving from Renaissance Latin, “New Latin” was developed in the 17th century CE and used specifically for intellectual works.

This is part of the reason why the taxonomy of species and medical terms still uses Latin today. Much of scientific terminology today still use the New Latin roots.

Eventually, Latin lost its role in science and education but still remained within the realm of Christianity, particularly Catholicism. Even today, Ecclesiastical Latin has continued to remain the language of the Catholic Church.

Due to the seat of the Catholic Church being located in Rome, Italy, Italian has had a great deal of influence on the pronunciation of Ecclesiastical Latin.

Why Was Latin Important?

Latin was important due to it being the language of the Roman Republic and the eventual Roman Empire. As the power of Rome expanded, so did the extent of the use of Latin.

This is how Latin eventually became a lingua franca, the language of business, government, and general communication, in the ancient world.

In the vast reaches of the empire, inhabitants and Roman government officials and their law courts would have spoken Latin. Thus, in order to engage in business and politics, you needed to be able to speak Latin.

What Was Latin’s Role As A European Lingua Franca?

Throughout the Roman Republic and Empire, Latin was the lingua franca. But even after Rome fell, Latin still remained a language of education as well as diplomacy between European powers.

Regional languages continued to develop and become dominant. And Latin became less common within countries. That's why Latin became the language of international communication between states.

This use as a lingua franca continues past just a political language. It was also a language for intellectuals. Many works were written in Latin even through the 19th century CE.

People who lived in various European countries who may not have spoken the same native language would still be able to read and write in Latin. And be able to communicate and understand various ideas of politics, science, and philosophy.

What Was Ecclesiastical Latin’s Role In History?

Ecclesiastical Latin actually has a unique role in history. While even today Latin is the language of the Catholic Church, in the past Latin language knowledge was often a way to control the knowledge of religion within Europe.

Many people in Medieval and Renaissance Europe were illiterate. And likely had no knowledge of Latin due to a lack of comprehensive public education.

Thus, followers of Christianity were unable to read the words of the Bible and other religious texts that were in Latin. This gave significant power to the churches and people who could read Latin, namely elites and ruling classes.

With the reformation and emergence of new branches of Christianity in Europe, Latin was no longer the language of the Church. Many new branches allowed the Bible to be printed and mass to be held in local languages.

As a result, more people were able to make their own interpretations of religious texts. And have greater knowledge of their religion. It was not until the mid-20th century that the Catholic Church allowed for mass in languages other than Latin.

How Did Latin Develop And What Is Its Role Today?

Latin has an incredibly long history. And has had an immense role in influencing language and culture today. Through time Latin developed based on its role as a spoken lingua franca to being a written language and even to just the context of the Catholic Church.

As the wider population used Latin less, it began to change. And even lead to the creation of the Romance languages. Romance languages of Italian, French, Spanish, Romanian, and Portuguese all developed and derived from the later forms of Vulgar Latin.

The other regional languages that existed throughout Europe merged with Vulgar Latin to eventually become independent Romance languages. Thus, one major role of Latin has been its place as a parent language to numerous modern European languages.

In addition, people still use Latin in various ways today beyond the languages that derived from it. The Catholic Church still uses it to various degrees and depending upon the congregation.

Many religious scholars and European historians of certain time periods still continue to learn Medieval Latin for reading older texts, such as Bibles, government documents, or even literature.

You would not be hard-pressed to even find college diplomas that are written in Latin. This hearkens back to the importance of Latin within the institution of education.

For a dead language, Latin has had an incredible history and just won’t actually stay dead. With numerous usages even outside of the realm of history, Latin will continue to be an important language internationally and particularly in European countries.

Now you know how Latin came into being and developed over time, why it was important in the past, its role as a lingua franca, how Ecclesiastical Latin was important in history, and how it developed even later until its use today.

So now all that's left for you to do is to start learning, even if Latin can be hard to learn. But here at StoryLearning®, to make language learning fun and effective you learn language through stories. So why not try out these Latin books to immerse yourself in the language and pick it up naturally through reading.