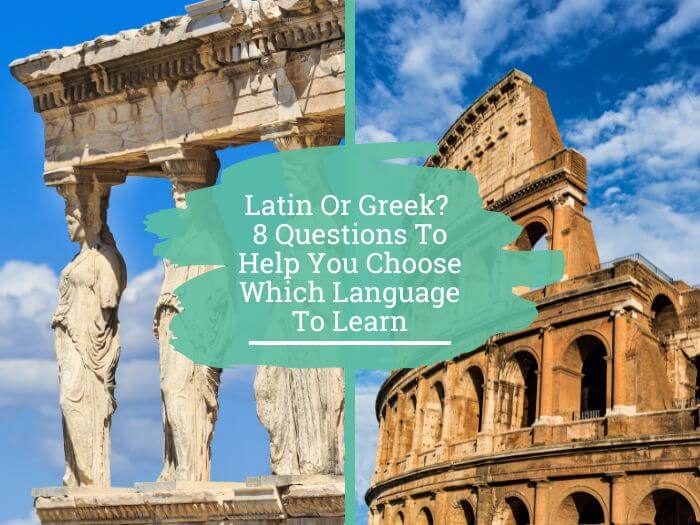 Latin Or Greek: 8 Questions To Help You Choose Which Language To Learn

Both are frequently offered at the college level within Classics or Ancient History programs. Perhaps you are then confronted with this decision of which language between the two is best for you.

In this article you'll discover 9 questions to help you determine whether Latin or Greek would be the best language for you to learn.

A major component of deciding between Latin or Greek would be to consider what your native language is. It's typically easier to learn languages that are related to each other.

Similarly, if your native language is a Romance language, Classical Latin will likely be easier to learn than Ancient Greek.

On the other hand, if your native language is Modern Greek, it would likely be easier to learn Ancient Greek. In this case, you'd have a fluent knowledge of the alphabet and many of the words remain the same over time.

If your native language isn't even from the Indo-European language family, there would likely be no major drawback in terms of grammar and vocabulary in choosing either Classical Latin or Ancient Greek.

Additionally, it's possible that the alphabet of your native language is different from Classical Latin or Ancient Greek. Thus, either way, you would need to learn a new alphabet.

Your native language being more closely related to Classical Latin or Ancient Greek may be a good way for you to determine the ease with which you will learn the language.

The more closely related a language is on the language tree, the more similar the vocabulary and grammar will be.

Similar to choosing between Latin or Greek based on your native language, it's possible to make a consideration based on any previous language learning experience you have had.

Both Classical Latin and Ancient Greek are known for being heavy on grammar. Any previous knowledge of grammar will be incredibly helpful for both. But don't let the grammar villain put you off learning either one!

In terms of ways to choose between the two, if you've learned any Romance languages, it would be more beneficial to learn Classical Latin due to the similarities in grammar and vocabulary.

If you've learned Modern Greek, it may be more beneficial to learn Ancient Greek due to the shared alphabet as well as some similar vocabulary and grammar.

If you've not previously learned a language, it would more likely be recommended that you learn Latin due to the number of resources available. More on this will be discussed below.

3. Which Language Is Easier To Learn: Latin Or Greek?

Learning another language will always be difficult. So you should hesitate to rank languages based on “easier” or “harder” to learn. Each language has is challenges depending on the language itself, but also your experiences and knowledge.

For example, with Ancient Greek, a major hurdle you may face is the alphabet. Only the Modern Greek alphabet shares the same alphabet as Ancient Greek.

Both languages provide roots for much of English grammar and vocabulary. This can make it easier to see connections between English and both ancient languages.

So the overall sharing and influences of attributes and vocabulary are similar between both languages.

Another item to consider is that Ancient Greek does have some additional grammatical concepts, such as verb aspects. But it also has fewer noun and adjective cases that Classical Latin.

Overall, if your native language, or previous language you have learned, is a Romance language, you may find Classical Latin much more familiar.

So in these circumstances, Classical Latin would be “easier” to learn in comparison. This perspective is what often leads to the claim that Ancient Greek is harder to learn.

4. How Available Are The Learning Materials?

The availability of learning materials may also be a major consideration when deciding between Latin or Greek.

Due to the fact that it's learned internationally from the primary level through the university level, Classical Latin has a greater amount of learning material available. This can be in the sense of a broader amount of learning aids for different ages of language learners.

Classical Latin has several Latin books that are targeted at various age groups. Additionally, since so many people learn Classical Latin, there's also a greater variety of learning materials beyond textbooks and readers. You can find podcasts, videos, games, etc. to help you learn.

On the other hand, Ancient Greek is primarily taken at the university level. So there are fewer people learning the language and fewer resources available in various formats.

In this case, if you want a greater variety of material to work with and learn from, Classical Latin would be a clearer choice.

5. How Do You Plan To Use The Language?

Another way to help decide between the two would be to consider how you plan to use the language.

This can become more complicated if you find that you possibly want to study Ancient Greek people who lived with the Roman Empire. Certainly, you would come across sources that are both in Ancient Greek and Classical Latin.

Honestly, in these circumstances, you would likely end up learning both. But then you're faced with the question of which to learn first, Latin or Greek. See below for a more in-depth discussion of that question.

6. Latin Or Greek: Which Interests You More?

Similar to the above, you may consider which language interests you more. Perhaps this is linked more to an area or people you wish to learn more about.

However, you may be drawn more to using Ancient Greek because you find the Greek alphabet interesting to learn. Or maybe you would like to be able to read Latin mottos or inscriptions on buildings.

Considering these types of language use will also aid you in choosing between Latin or Greek.

7. Will This Language Be A Bridge Between Languages?

To choose between Classical Latin and Ancient Greek, you may want to think about if you plan to learn other languages after.

Classical Latin and Ancient Greek have other languages that share similarities due to being within the same language group, language branch, or language family.

For example, if you're interested in learning one of the Romance languages, such as Italian, French, Spanish, Romanian, or Portuguese, you would find a greater benefit in learning Classical Latin.

This is due to the fact that Classical Latin is the root of these Romance languages, lending to similarities in vocabulary, grammar, and syntax.

Similarly, if you want to learn Modern Greek, it would be most beneficial to learn Ancient Greek as it's the root of Modern Greek.

For many Classics students, it's common to actually learn Classical Latin and Ancient Greek. From there you are confronted with a different issue: which to learn first? This of course can be based on preference.

Additionally, going in this order often makes sense since some Latin grammar and vocabulary did originate from Ancient Greek.

Alternatively, you may choose to start with Classical Latin and then work up to the more difficult Ancient Greek. This would certainly be a good choice if you've never learned a new language in an academic setting. That is, a setting that emphasises grammar and syntax.

Latin Or Greek: Which Language To Choose?

So, should you learn Latin or Greek? In the end, this is up to you and you need not limit yourself to one. Both languages have aspects that make them more difficult or beneficial to learn than the other.

Use the information above to see what your motivation to learn a language is and what your background already is to help you make that decision.

Honestly, when it comes to choosing between Latin or Greek either way, you can't go wrong!