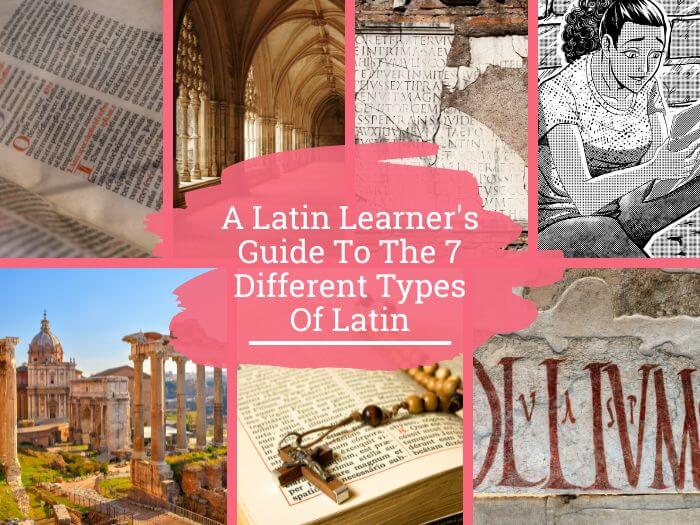 If you're considering learning Latin, then it helps to know that there are several different types of Latin, seven in fact! Not bad for a “dead” language.

Due to its old age, Latin has evolved over time according to how and where it was used. Not to mention the fact that all languages overtime change due to natural language evolution.

Before you start learning Latin, you'll need to know how the types of Latin differ and which one would be most beneficial for you to learn.

By the end of this post, you'll be aware of these different types of Latin and which one would suit you best.

Archaic Latin, also referred to as “Old” Latin is one of the earliest known forms of Latin.

Typically Archaic Latin is referred to as any form of Latin that was used in the Italian Peninsula before 70 BCE.

There are most often varied spelling differences compared to later forms of Latin along with less standardised spellings. Typically this Latin will also show greater regional variability.

Out of Archaic Latin grew Classical Latin. Classical Latin is one of the most popular forms of Latin taught and learned at primary, secondary, and higher education levels due to its relationship with Ancient Rome.

This form of Latin would have been used among the educated individuals of Ancient Rome from the Republic to the middle Roman Empire in both speech and writing.

This form of Latin will be found in any Republican or Imperial speeches, literature, and inscriptions. Classical Latin is considered by many to be the standard form of Latin with other forms of Latin being corruptions of it.

Compared to later types of Latin, Classical Latin focuses greatly on case usage to identify the use of nouns and adjectives within sentences.

Vulgar Latin is what is often referred to as a “common” form of Latin or one that commoners would use in everyday life. This form of Latin would have been spoken in the Roman Republic and Empire.

In this definition of Vulgar Latin, this can refer to any Latin being used by the population of Ancient Rome regardless of the time period. Vulgar Latin can also be used to refer to the type of Latin used in the later Roman Empire, around the 3rd century CE.

This type of Latin is often found in Christian texts, Roman inscriptions, and medical and grammatical texts. Typically, any written Latin from the Roman early Empire and Republic would not have been written in Vulgar Latin.

Vulgar Latin is often marked by the loss of certain forms and spellings of classical terms or even the preference for vocabulary terms that are less prominently used in Classical Latin.

Additionally, Vulgar Latin tends to focus more on using prepositions rather than utilising cases. This makes it easier to learn, provided you know the definitions of the prepositions.

Among Vulgar Latin, it is likely that there was also a regional variety that led to regional changes as well.

Medieval Latin was used in literature and the Catholic Church during the Medieval Period in Europe, around 1000-1500 CE. A

At this point in time, Latin wouldn't have been used among common people in everyday conversation but relegated to writing and religious and government use.

People in their everyday lives would have been speaking their own local languages as Latin as a spoken language has been replaced.

Much like Vulgar Latin, Medieval Latin preferred the usage of prepositional phrases as opposed to determining word meaning and use on the case ending.

Additionally, word order starts to become more strict, and likely would have followed the word order rules of their local regional language.

As with the remainder of the Renaissance period in Europe from 1500-1700 CE, Renaissance Latin is a return to Classical Roman culture.

Renaissance Latin remained a written form of Latin as regional and national languages would have been used throughout Europe.

During this time as well there was an emergence of “vulgar literature,” which would have been literature written in regional and national languages.

Renaissance Latin is seen as a correction of Latin back to the Latin used in the Roman Republic and early to middle Empire. This means that spelling, Latin grammar, and syntax are more similar to Classical Latin than Medieval and Vulgar Latin.

Eventually, Renaissance Latin replaced Medieval Latin and likely became much more standardised in its correction back to Classical Latin.

Ecclesiastical Latin is a type of Latin that is associated with the Roman Catholic Church dating back to the Roman Empire and is used even today.

Ecclesiastical Latin is only used for writing and speaking within the context of the Roman Catholic Church.

Thus, Ecclesiastical Latin would be spoken during mass as well as used for reading and writing texts, including versions of the Christian Bible.

Ecclesiastical Latin is one of the only forms of Latin still used today in its spoken form. And that brings us nicely to the last of the types of Latin in this list.

Contemporary Latin is a broad type of Latin associated with the end of the 19th century CE. To a certain degree, Contemporary Latin has been used as a common international language within Europe or a lingua franca.

Within the category of Contemporary Latin, there are other subcategories, such as Neo-Latin and Living Latin.

Neo-Latin, or New Latin, is a form of Latin that was used after the Renaissance. Typically it is similar to Renaissance and Classical Latin specifically used for scientific and other academic purposes.

For the most part, Contemporary Latin is primarily a written form. Living Latin is an example of Latin that is used to attempt to promote the re-emergence of Latin as a spoken language.

Most often this is associated with Latin courses as a more modern way of learning Latin. But it's also used by some as a form of communication. Living Latin can often be seen in various media promoting it, such as podcasts and videos. A good example is our Latin Uncovered teacher, Luke Ranieri, who has a YouTube channel.

In my Latin course, Latin Uncovered, which is based on a story, you'll meet characters from the present day who speak to each other in Latin. You can see an example of this in the screenshot above.

Types Of Latin: Which One Should You Learn?

So now it's time to answer the question – which type of Latin would be best for you to learn? Let's take a look at some factors that might affect your choice.

One major aspect to consider would be the availability of learning resources for the specific type of Latin you want to learn. As mentioned earlier, Classical Latin is the most commonly taught form of Latin.

Often people that want to learn a different form of Latin will typically start with Classical Latin and then find other resources to facilitate learning other types of Latin.

What Types Of Latin You Want To Read

Another aspect to consider is what types of texts or writings you want to read or otherwise use Latin. This will really help you narrow down what type of Latin you should seek out.

Some of this can be decided by narrowing down what time period your Latin of interest falls within. If you are seeking to read texts and inscriptions from early Roman history, you will want to learn Archaic Latin.

If you want to read Classical texts in their true form or other items from the Republican or Imperial period in Roman history, Classical Latin would be the best option. This is the most commonly taught type of Latin.

Additionally, Classical Latin could be a great place to start if you're also interested in reading texts from the Renaissance period that are in Latin. In the desire to correct Latin to its classical form, Renaissance Latin is fairly similar to Classical Latin.

Vulgar Latin would be a great option for many different purposes. For example, if you wish to read graffiti from Ancient Rome or to read later Imperial texts, Vulgar Latin could be very helpful.

Medieval, Renaissance, and Contemporary Latin are all period-specific forms of Latin. These are used for various academic, literary, and political purposes, hence why there are so many reasons to learn Latin.

If you're working or interested in engaging with Latin from these specific time periods, it would be beneficial to focus on these specific types of Latin in your learning.

Finally, Ecclesiastical Latin is a form of Latin you'll want to learn if you will be speaking and reading Latin that is in the context of the Christian and most often Roman Catholic Churches.

Types Of Latin: Choose Your Own Adventure

In the end, you'll be able to determine which type of Latin you should learn depending on the period in history you are interested in.

Unfortunately, certain types of Latin may be more difficult to have access to compared to others, which may also influence the type of Latin you end up learning.

Regardless of the type of Latin that you choose, it's still possible to learn one and read and write in another type of Latin. Thus if you're not able to have access to the specific type of Latin you would prefer, you'll not go wrong learning a different type.

So with that in mind, the next step is to choose the right method to learn Latin. I recommend StoryLearning, a fun and effective way to learn a language through stories not rules. Reading books in Latin is a great way to get started.