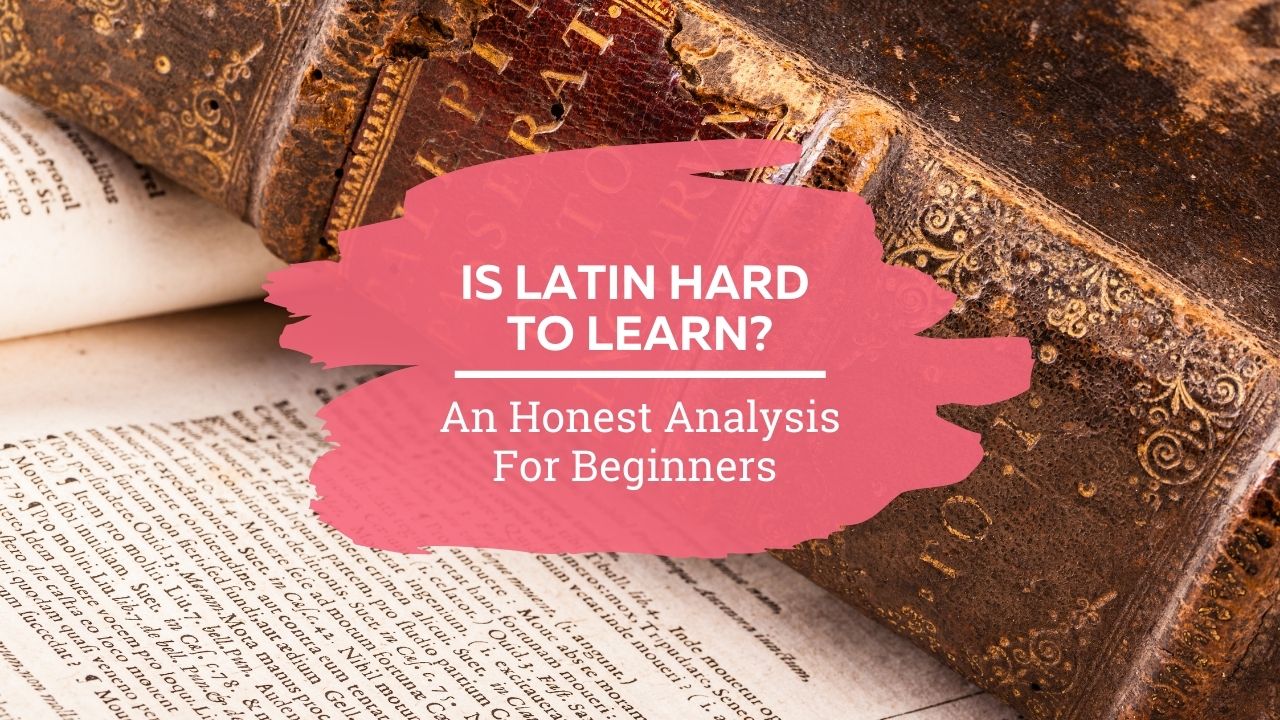 Is Latin Hard To Learn? An Honest Analysis For Beginners

There are a lot of facets to Latin that label it as being a hard language to learn. However, all languages to some degree are difficult. And Latin doesn't have to be intimidating.

Here are some factors that make people consider Latin a hard language:

These different factors will depend on your native language and your background in language learning. If you already know a Romance language or languages that use cases and gender, you will find these aspects less of a hindrance to learning Latin.

So, is Latin hard to learn? Read on to find out.

If you like watching videos, hit play on the video version of this post below. Otherwise, keep scrolling to read the article version to find out – is Latin hard to learn?

Latin Is A Dead Language

As a dead language, this can be a complication in learning Latin. You don't have other native language learners to help you practice the language. There's no country that you can visit to try to speak in only Latin or participate in a language exchange program.

In addition, when learning Latin, you are often not learning how to use Latin conversationally. Fortunately, there are increasing numbers of Latin teachers and institutes focusing on learning Latin as a spoken language.

Regardless, this does not make Latin impossible to learn. Instead, you're able to focus more on the existing bits of real Latin. You will be able to spend time practicing and understanding the grammar of the language.

Also, as a dead language, there are no words that have been created for new inventions and concepts, such as “computer.” This significantly decreases the amount of vocabulary that you need to know in order to master Latin.

Some people end up choosing Latin because of the fact that it is a dead language. Most Latin classes do not have an oral or spoken component to the class. A great way to keep the fear villain at bay!

In many other modern language classes, you have some sort of oral exam and expectations to participate by speaking in the language in class. The lack of this aspect often draws in more shy language learners.

Unlike other languages that have two expressed grammatical genders, such as French, Arabic, and Hindi, Latin has three genders: feminine, masculine, and neuter.

For the most part, this means that for adjectives, there is three times the number of possible endings that can be used. For nouns, you will need to memorise the gender of the noun in order to be grammatically correct.

Latin genders can add complications to the noun and adjective relationship. When creating a noun-adjective pair, a Latin learner needs to consider the gender of the noun to determine how to form the adjective.

Reasons Why Latin Gender Isn't As Hard As It First Seems

While this may be overwhelming, there are several considerations that make gender significantly less overwhelming. There are over 4,000 languages in the world that use gender. Many actually use the three-gender system.

If your native language has even two grammatical genders you'll be familiar with this concept, even if you haven't explicitly learned it. This makes it easier for you to learn the gendered endings due to your ingrained acceptance and understanding of the concept of gender.

In addition, you can learn and categorise Latin genders easily thanks to numerous patterns.

First, several grammatical endings tend to have similar vowels used depending on their gender. For many cases, the feminine gender has a’s while masculine and neuter have o’s, u’s, and i’s. Certainly, there are exceptions to the rule, but this pattern is a great starting point for beginning to learn Latin.

In addition, the meaning of the word can also help you determine what the gender of the noun is if it's not easily discernable based on the ending.

Latin Case Use And Endings

One of the biggest concerts that language learners have is the claim that Latin grammar is harder than other languages.

There are five main cases, Nominative, Genitive, Dative, Accusative, and Ablative. These cases change the endings of nouns and adjectives according to their use in the sentence.

Latin nouns and adjectives, beyond gender, also need endings depending upon their cases and use in the sentence. Unlike English, Latin doesn't rely on word order to determine how words are used in the sentence.

While main verbs are typically found at the end of the sentence, nouns and adjectives can technically be anywhere in the sentence. Meaning is found through the case ending of the noun. And adjectives are paired to their nouns based on their endings.

The patterns in case endings create declensions, of which there are five. Additionally, there are five cases, and two numbers, singular and plural. This gives around 50 possible endings for nouns, which is certainly very intimidating.

Not As Bad As It Sounds

No matter the appearance of infinite ending options for Latin nouns, a noun actually only has ten possible forms, not the 50 that it may seem.

Not only is there a finite number of endings for a noun, but also the cases follow a pattern through all five declensions.

Latin is not the only language that has cases to give meaning to nouns in sentences. German, Russian, Mongolian, and Japanese are examples of languages that have from three to eight different cases.

Tsez, spoken in the Dagestan region in Russia, actually has 64 cases! Considering Latin only has five, you could consider Latin’s cases to be less of a deterrent to learning it, comparatively.

The use of cases allows Latin to be much more flexible in its word order. Latin authors and orators have taken advantage of this flexibility to artfully arrange words, imparting additional meaning in the intentional composition of their sentences.

Aside from Ancient Romans, this allows you to organise your sentences in your own unique way.

There are also several different grammatical concepts such as subjunctive clauses and ablative absolutes. Due to the extensive grammar of Latin, there is a greater chance of you coming into contact with some very complex sentences.

One of the common jokes about the orator Cicero is that you can go through lines and lines of text before you find the verb of a sentence.

This claim that Latin has the hardest grammar is unfounded. Every language has its own quirks and complexities of their languages. Much of the concern over the difficulty of Latin grammar decreases if you’ve learned other languages before in a traditional setting that focuses on grammar.

If you have never learned about how grammar functions, this will make learning any language’s grammar very challenging. The possible struggles of learning grammar are also relative to the type of language you already know.

If you know other Romance languages, Latin has more in common with their grammar. If you are learning Latin from learning Korean, there will be certain aspects that will be more difficult than for Romance language speakers.

Latin is a very logical language and will generally fit its established grammatical patterns. While Latin grammar can be complex, once you learn it you don't need to worry about an excessive amount of exceptions to rules.

People often compare Latin to puzzles due to its logical nature. If you encounter difficult and challenging sentences or phrases, the pleasure that you feel when figuring it out makes it worth it.

So, Is Latin Hard To Learn?

As much as any language is hard to learn! Elements of Latin are more challenging than others, causing Latin to seem harder to learn than other languages.

Truly, learning languages, including Latin, is a lofty endeavour for any person. There are aspects of the language that makes Latin confusing and complex. It's a dead language and has many factors of its grammar that are tricky.

Regardless of these challenges, learning Latin is not impossible by any means. Mastering Latin is certainly difficult. But you can achieve it through dedication to learning the different patterns and seeing logical connections.

With consistent effort and commitment, anyone can learn Latin! Especially if you use the right method – StoryLearning®, my method where you learn by reading stories – is particularly well-adapted for learning Latin.

For more inspiration, check out these 11 life-changing reasons to learn Latin.