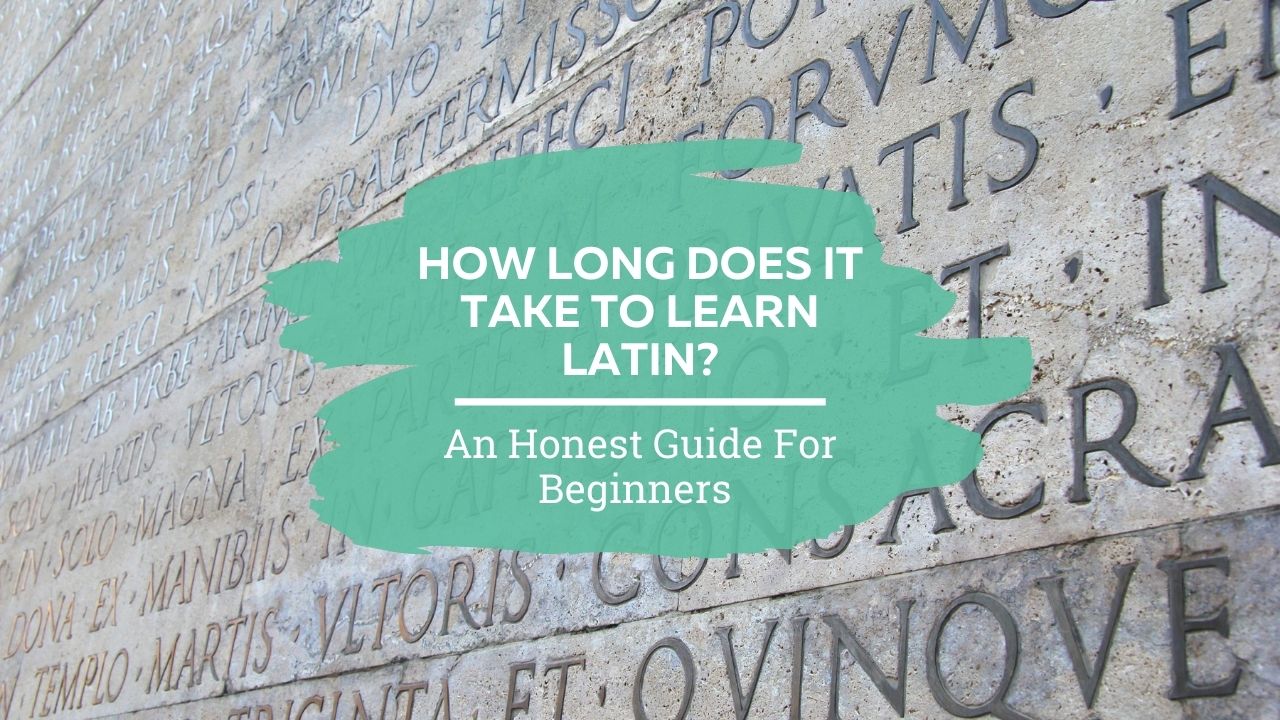 How Long Does It Take To Learn Latin? An Honest Guide For Beginners

When you are about to tackle learning Latin, one of the more popular thoughts you'll have is: how long will it take me to learn Latin?

The goal of learning languages (for most people) is to become some version of fluent in that language.

Especially if you are learning a language outside of a class, you'll need to consider how much time you are going to need to devote to learning this language. You'll also probably want to figure out how soon you will be able to reach that “fluent” target.

Unfortunately with Latin, this is not always a straightforward answer (nor for any foreign language, actually). There are many things you need to consider to answer this question. And the answer, in the end, will not be the same for everyone.

According to the U.S. Federal Service Institute, learning a new language can take from 600-1,100 hours to learn, or 24-44 weeks, based on your specific background. Continue to read down below to help you figure out how long it would take YOU to learn Latin.

There are several questions you'll need to consider when determining how long it will take you as an individual to learn a language.

Learning a language, Latin included, can be a very personal journey. It's important that you consider the following questions honestly so that you get a general calculation for how long it will take you in hours to learn Latin.

1. What Do You Consider “Fluent” To Be For Latin?

The joke always is Latin is a dead language. Yes, it is true that no one still speaks it as a primary form of communication.

While you'll come across Latin in many contexts, such as medical and legal jargon and in some forms of Christianity, you won't need to reach a “conversational” level of using Latin.

For the sake of this, I'll consider fluency to be the ability to read pieces of Latin literature (or honestly even mottos on buildings and currency) without needing to look into a grammar book or dictionary for every sentence you translate.

Do keep in mind, that even Latin experts do need to look at a dictionary here and there to ensure they have the correct nuance of a word. So you can't be TOO strict in your definition of “fluent.”

Regardless, fluency in Latin should mean that you have a dictionary by you, but you rarely use it when reading casually.

2. What Is Your Baseline Knowledge Of Grammar?

This can be said of any language, but Latin especially. What do you know about grammar in your own language? One of the largest hurdles for language learners is understanding the basic grammar of their own language.

When you learn Latin, you're exposed to so many aspects of grammar, such as parts of speech, tense, number, conditional sentences, subjunctives, etc.

Often when you learn your native language you learn by ear and don't learn the grammar. If you hear someone says “He were” versus “He was” you might not be able to grammatically explain why it is wrong. But you can tell that it sounds wrong.

If you're able to point to that and say that you have provided the wrong number of the verb, i.e. you used the plural version versus the singular version, then you are likely to be able to understand Latin grammar easier.

3. What Is Your First Language?

You'll also need to consider, what your native language is. People who speak a Romance language as their first language will likely have an easier time due to these languages coming from Latin.

These languages will have much similar grammar and vocabulary to Latin with some differences, of course.

Once you travel down the language tree and find yourself getting further and further from Latin, it will likely become more and more difficult to learn Latin.

Unfortunately, this is something you cannot help or avoid but is something that you will have to rise to the challenge of.

This is also where question 1 comes into play. Just because you speak Spanish or French natively, it doesn’t automatically make you a shoo-in for Latin mastery.

Even if your native language isn’t even related to Latin, if you understand the basics of grammar, you will still be at an advantage.

4. Have You Learned A Foreign Language Before?

Another question you should ask yourself to determine how long it will take to learn Latin is whether or not you’ve learned a foreign language before. This connects back to understanding grammar.

If you’ve learned a foreign language in a formal setting like a class versus through conversation, you have likely learned about the basic, and still important, aspects of grammar that will easily transfer to Latin.

Even if the foreign language is in no way related to Latin, such as Japanese, there are still grammatical concepts that are shared.

For example, Japanese, like Latin, has cases that are used with nouns to help identify the meaning of the word in the sentence. Technically English no longer has cases.

So in this scenario, having learned Japanese would put you at an advantage in learning Latin due to this grammatical knowledge.

5. What's Your Level Of Dedication To Learning Latin?

A final consideration, what is your end goal and dedication to learning Latin? Are you doing it causally for fun, or are you seeking to learn it for a larger purpose?

Either one is awesome but can impact the quality of the hours you spend learning Latin. If you're learning it casually, it may take more hours to learn. This is not a negative by any means, but a consideration.

How Can I Make It Easier For Myself To Learn Latin?

There are several ways that you can make learning Latin easier. But the most important one is exposure! This may prove to be difficult compared to spoken languages.

You can't find a Latin-speaking pen pal or someone in your school or neighbourhood that natively speaks Latin. Don't go up to an Italian speaker expecting them to know Latin, you might know it better than them.

Instead, a better way is to continue to practice through reading. Good news: you can learn any language by reading thanks to the StoryLearning® method.

Doing practice sentences can be really boring and make it feel like a task or chore rather than an activity to enrich your knowledge of Latin.

You can find Latin texts, whether it is history, poetry, mythology. But you can also find people online who have created things in Latin.

For example, several popular book series have actually been translated into Latin, such as The Hobbit (or Hobbitus Ille). There are also awesome creators who have videos, games, and other visuals that will help you engage in the language.

Essentially, have fun with it. And the hours you spend learning Latin will be much more fruitful and will result in the longevity and better retention of Latin in the future.

How Many Hours Will It Take To Learn Latin?

In the end, we are faced with the question: how many hours does it take to learn Latin.

This is incredibly difficult to answer since everyone comes with different backgrounds, levels of determination, and expectations when learning Latin.

For the sake of answering the question, I'll make the calculation based on your background knowledge, following the U.S. Foreign Service Institute’s categorisation of languages and calculations.

If you have greater knowledge of Romance languages, either through it being your native language or one you’ve learned before, it can take around 600-750 hours to learn Latin. This is the equivalent of about 24-30 weeks in a class, so at least half a year of intensive Latin.

If you've never learned a foreign language before or you know you are slower at learning languages, err on the side of caution and look more towards the higher end of that range.

If you don't know Romance languages, but speak a language still slightly related, let's say German, Russian, or Afrikaans, this will put you in a different range. It will take you around 900 hours to learn Latin or 36 weeks If you fall into this category.

Again, give or take based on previous experience with learning languages and your learning abilities.

Finally, if you speak a language that is very very distantly related when looking at the language tree, such as Arabic, Japanese, or Cherokee, these will end up taking longer. This category will take around 1,100 hours to learn Latin, which is about 44 weeks.

Since the grammar and vocabulary of these languages are different from Latin, you will have to learn many more grammatical rules and vocabulary in order to reach fluency.

While this may seem intimidating to look at all of these hours, even in the shortest ranges, do not let that discourage you (that's just the inconsistency villain messing with you).

Your diligent studying and work to learn Latin will most certainly pay off and make you (mentally and maybe even lucratively) richer.