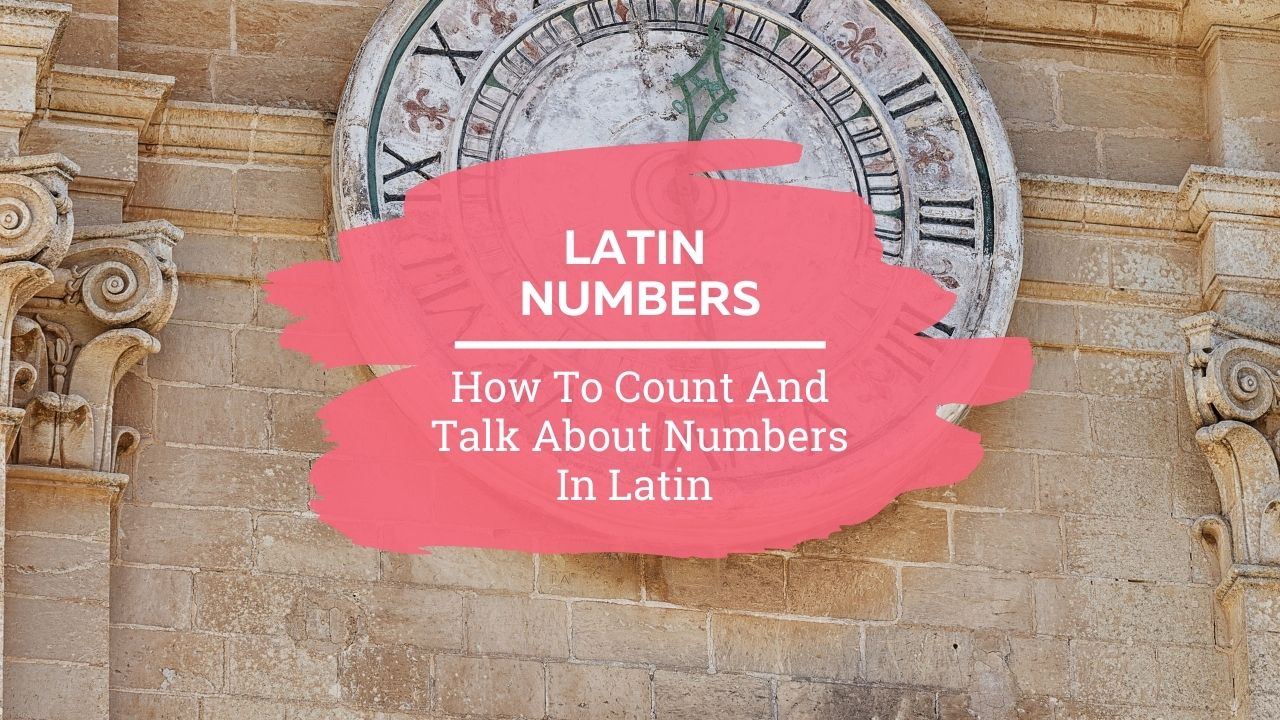 Latin Numbers: How To Count & Talk About Numbers In Latin

Number and number systems typically follow a particular pattern, but it will usually be different for each language. When reading or writing in Latin, it will not be long before you come into contact with and need to understand how to use numbers.

Numbers can be intimidating when learning a language due to the aspects that make each number system unique.

Many languages, like Latin, have cardinal and ordinal numbers, as well as numerals and spelled-out numbers. This article will help you quickly become an expert with the nuances of the counting system of the Romans, no matter the intricacy.

The remaining cardinal numbers do not decline, meaning the form will remain the same no matter the noun they are modifying.

Ordinal numbers are used to rank or order things.

For example, if deciding the place of a race, in English you would use “first, second, third” and following.

In Latin, all of the original numbers are declined according to the gender, number, and case of the noun that it is modifying.

Roman numerals are not as straightforward as cardinal and ordinal numbers. You will see Roman numerals less frequently in literature.

Instead, Roman numerals are often seen in inscriptions because, for the most part, they take up less space than numbers.

See the chart of the basic letters used for numerals and their value.

The system of Roman numerals are based on the addition and subtraction of the values. When a letter of equal or greater value is placed before another numeral, you would add the values together.

See the chart below for examples:

Addition And Subtraction Of Roman Numerals

When a letter of lesser value is placed before another numeral, you would subtract the value. Once the number begins to be larger, it is best to begin to group letters until you see a circumstance that you need to begin subtracting.

See the chart below for examples.

Once the numbers get larger, Roman numerals can be unwieldy. It is important to remember that once you encounter a letter that increases in value from one letter to the next, that indicates you need to do some subtraction before continuing on.

Using brackets like in math will be helpful to start understanding how to put these numerals together.

One place that you will often see numbers, now and in the past, are in dates. The Ancient Roman Calender is significantly different from most modern calendars.

Rather than counting from the first day of the month, the Roman calendar counts based on the distance before and after three different day markers: the kalends, nones, and ides.

The day of the month is determined based on which marker date it is leading up to. If the date is the 6th of January, the kalends and nones have already passed. The 6th will then be measured based on the number of days before the ides of January.

Some university diplomas are written in Latin. Fortunately, they do not use the Ancient Roman calendar based on the kalends, nones, and ides. Instead, they use the modern calendar of using the number of days past the first day of the month.

Roman women were often named based on the order of their birth, such as Aemilia Tertia, indicating that this daughter is the third daughter born to this family.

Men also may have a cardinal number in their name to indicate the rank in the birth of sons. Typically Primus, Prima, Secunda, and Secundus are not as common, especially if there are only two sons or daughters, choosing instead to label them as Major or Minor depending on which is oldest.

How To Count In Latin

There are several things to keep in mind when learning numbers in Latin. First, there are differences between cardinal and ordinal numbers. Are you counting things or are you putting them in a specific order or ranking?

Second, beyond numbers being written out, you will also see numbers written in Roman numerals. These have their own specific, and slightly more complicated, system of numbering.

Learning to count in Latin is important for numerous reasons. For general counting purposes, it is important to understand what you are reading or for writing to get across more information.

Knowing Latin ordinal numbers can also be important for recognising certain names of men and women and learning more about their family structure.

You will certainly make some mistakes when learning these counting conventions, but once you get it nailed down you will easily recognize all types of Latin number systems.

So for now, to make mastering Latin numbers easy, apply the rules of StoryLearning® and read Latin books. As you read, you'll see the numbers in action and you'll internalise and start using them more easily.