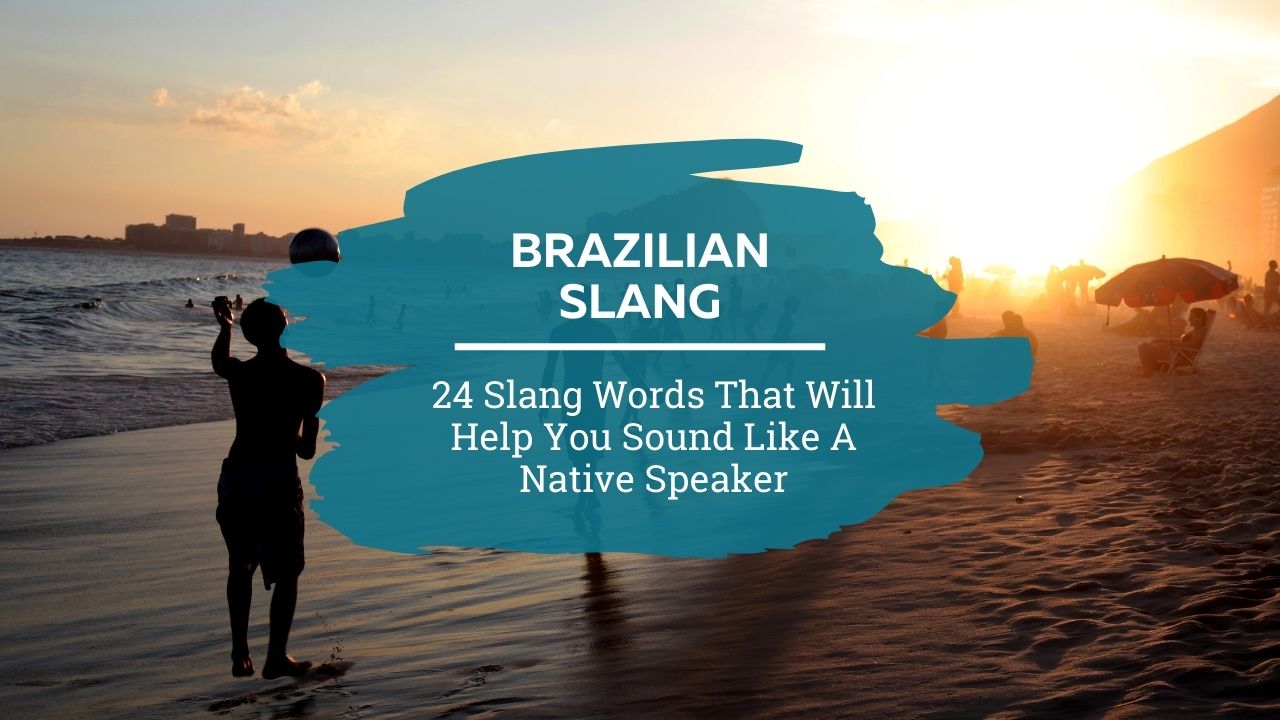 Brazilian Portuguese is a colourful language, full of lots of fun regional sayings and expressions – that is to say that like any country, Brazilian slang is a thing!

Even though you won’t find slang terms in the dictionary, you’ll find it pretty much EVERYWHERE else: on the streets, among friends, on TV and in films and music. And that’s why learning slang is an important part of language fluency.

Imagine trying to get by in the US without knowing what the words “chill out” or “let’s bail” or “what’s up” meant.  Or, in the UK, if you didn’t know what “kerfluffle” or “taking the piss” or “that bloke’s plastered” meant. You’d be lost!

Likewise, when you learn another language, you have to learn the slang as well. The way people express themselves to each other in more casual conversations gives you a more authentic sense of the culture and its nuances, not to mention helping you survive day-to-day life.

Here are 24 must-know Brazilian slang words, including their literal definitions, what they mean in slang terms and how you could use them in a real-life scenario.

This may well be one of the first slang words you hear in Brazil as it is so widely used in all parts of the country that it’s impossible to escape it. While it literally means “legal,” unless you’re talking about a court case, it will likely mean “cool” or “good.”

If you go out on a date and your friends ask you how it was afterwards, you could reply:

If someone comes to you with good news about something, you could say:

Beleza literally means “beauty,” but in slang terms it means “okay,” “good,” “fine.” For example, if you say to a friend, “I’ll meet you at 9 for coffee,” your friend can reply, beleza, which means “Okay.”

Da hora literally means “of the time,” but in slang terms, it means “cool,” “in style,” “hip.” If you hear a new album by your favourite artist, you can say it’s da hora, or “cool.” Or likewise, if you admire someone’s outfit, you can tell them:

Bacana is one of those golden slang words that has no other meaning. It is what it is. Bacana means “great,” “cool,” “awesome”. If you’re inviting someone to an event and you tell them there’s going to be a great DJ there, they could say:

Rolê literally means to “go around,” but in slang terms it means to go out. You could be going to a party or just cruising around with your friends and hanging out. If you’re heading out the door and your parents ask where you’re going, you can reply:

Balada is a party at a club. When your friends invite you to go to a balada, it means they’re inviting you to a dance club. Put your dancing shoes on and get ready to stay out late as Brazilians like to dance all night.

Grana is slang for “money.” If your friends want to go out and you’re broke, you can say:

Don’t worry, they’ll probably spot you until next time.

Café pequeno literally means “small coffee,” but in slang terms it means something petty or insignificant. If someone comes to you complaining about a petty issue, you can say:

For a country with one of the largest beef exports in the world, it’s no mystery that there will be some slang related to cows. Mão de vaca literally means “cow’s hand.” But in slang terms, it means “stingy.”

If you look at a cow’s foot, there’s no place to hold money. So someone who is mão de vaca is someone who never offers to pay or offers money to anyone.

Pão duro literally means “hard bread.” It has the same slang meaning as mão de vaca. Hard bread is hard to slice and therefore hard to share. If you’re always paying for nights out with a friend, you might want to confront them and say:

Brazilians must appreciate the beauty of felines. That's because one of the most common ways to compliment someone’s beauty is to call them a gato or gata. This literally means “cat” but in slang terms means “hot” or “sexy.”

When you see someone who you think is hot at a balada (check your slang above), you could say to your group of friends:

This word literally means “face”. But in slang terms it means “man” or “dude.” You’ll hear people say that all the time in informal situations.

Uma gelada literally means “a cold one” and refers to a cold beer. Brazil is a tropical country and as such, Brazilians like their beer cold. Ice cold.

This is no joke. Their biggest national brand, Skol, introduced a label that would change colour according to the temperature of the bottle so you could know for sure if the beer was cold enough to drink.

If you’re in the mood for a beer, text a friend and invite them for uma gelada.

Pepino literally means “cucumber,” but it actually refers to a problem. If you’re having a problem at work, you can say:

This is a very common slang term all over Brazil that is used to express shock in a negative way. If someone tells you they just lost their credit card, you could respond by saying:

Brazil is a predominantly Catholic country. So the term Nossa refers to Nossa Senhora which is like saying a Hail Mary. It’s reserved for more intense situations than putz.

So, when someone gives you really bad news like that they were just robbed or their dog died, you can say, Nossa!

To nem aí literally means “I’m not even there.” In slang terms it means you don’t care or couldn’t care less. If someone tells you that they just saw your ex on a date, you could shrug and say, to nem aí.

Viagem literally means “trip,”. But when people use it as slang it means more like someone is on a drug trip. If someone says something wacky or illogical, you can say:

Viajando na maionese literally means “traveling in the mayonnaise.” So, while that may seem as silly as could be, when you imagine it, you can understand the gist of the slang. It means to be without clarity or direction, to be clueless about what you’re doing.

If you have a plumber over to fix a drip on the sink and he’s there for a few hours without being able to fix it, you could say he’s viajando na maionese.

Pisar na bola literally means to “step on the ball,”. But in slang terms it means that you messed up or let someone down. If you were supposed to pick your friend up from the airport and forgot, you can expect a text from them saying:

Arrasar literally means to “raze” or “bulldoze.” But in slang terms it means to do an amazing job. If you go to see a friend’s performance, you can say afterwards:

Topar means to agree to something. If someone invites you to go for a hike or to be part of a new project with them, you can respond:

Bater papo means to chat. If you’re standing chatting with someone and someone else asks you later what you were talking about, you can say:

As you can see, Brazil has many different slang phrases that will be important for you to learn if you want to become fluent in Brazilian Portuguese.

If you want to brush up on your Brazilian Portuguese slang, check out Brazilian TV series or films. Or listen to Brazilian music or join a language exchange group so you can learn from a native speaker. More fun than learning Portuguese verb conjugation!

I hope you enjoyed learning a little about Brazilian Portuguese slang. And that you'll find a way to use these slang words with your Brazilian friends soon.