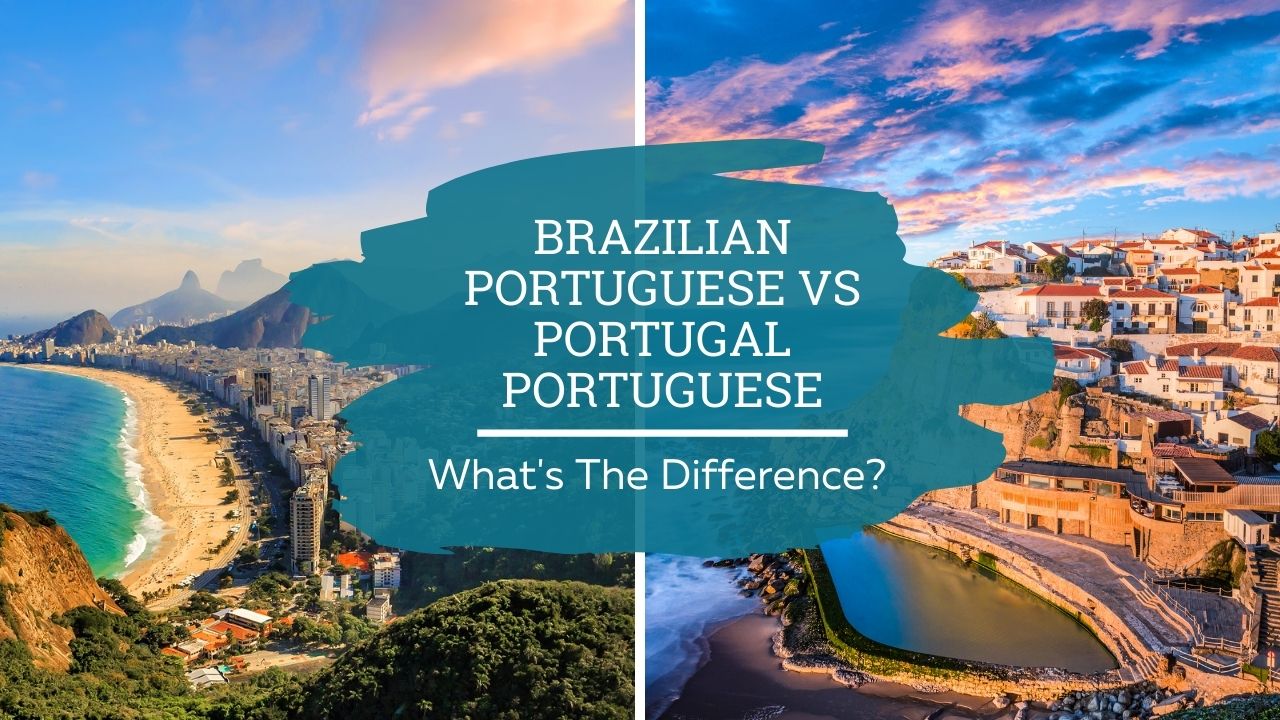 Brazilian Portuguese vs Portugal Portuguese – are they really that different? As an English speaker, you already have a little insight into the possible differences because you might have experienced one of these situations:

For instance, if you're an American who has been to England you may have been baffled when someone asked if you were “in the queue to use the lift”.

Or if you're a British native speaker who has visited the U.S., you probably had no idea what people were talking about when they discussed putting on “sneakers and sweatpants to go for a jog”.

Brazilian Portuguese has been enriched by the languages of the native populations already living in Brazil when the Portuguese arrived. You’ll see many names of rivers, plants, fruits and trees that still carry the indigenous names.

Brazilian Portuguese was also influenced by the languages of the Africans who were brought to Brazil during the slave trade. And the Northeast of Brazil, where the slave colonies were concentrated, still has a lot of words influenced by this phase of history.

Add to that the Polish, Italian and German settlers of the South and you have yourself a very interesting mix of sounds.

European Portuguese, on the other hand, has influences of its Spanish and Galician neighbours as well as the Arabic language. In fact, the name of the Southern coastal region, Algarve, comes from Arabic.

Now that you understand how each language was influenced by neighbouring languages, original peoples and new arrivals, let’s start with accents!

Keep scrolling to read this article or check out the video below.

Brazil is a vast country, and each region has its accents, from Rio de Janeiro residents’ (known as cariocas) famous “shh” sound in place of “s” verses the harsh Germanic-sounding accent spoken by residents of the southern state Rio Grande do Sul (known as gaúchos).

By comparison, the European Portuguese speak in a way where they maintain their mouths more closed and it can actually be hard for you as a new learner to catch the words as they tend to swallow them rather than pronounce them clearly.

Also, people speak much more slowly in Brazil than in Portugal. The Northeast of Brazil and the state of Bahia are famous for their slow drawl. The European Portuguese speak very quickly by comparison and it can be hard to catch what they’re saying as the words can almost sound like they’re running together.

European Portuguese are much more formal than Brazilian Portuguese speakers. That means that if you fail to use the right pronoun when talking to someone, you run the risk of offending them.

While most Romance languages (Portuguese, Spanish, Italian and French) have very strict rules about using the formal and informal pronouns when talking to people, Brazilian Portuguese speakers break with tradition.

They use a blanket você (you) to address everyone. Now, in Southern Brazil, in the state of Santa Catarina which was founded by immigrants from the Azores, you’ll find people who use tu instead of você.

Also, the older generation across the southern Brazilian states can still use a more formal greeting and expect someone younger or of lower social status to address them as Senhor/a (Sir or Ma’am). But the general rule of thumb is that you can just use você for everyone.

As with the older generation in Brazil, some older European Portuguese may prefer that you address them with the Senhor/a title rather than você.

Greetings In Portugal vs Brazil

Also, when you greet someone in Portugal, you say Bom dia/boa tarde/boa noite. Como esta? (Good morning/afternoon/evening, how are you?)

When you greet someone in Brazilian Portuguese, you can say that long sentence or you can shorten it to a very simple Oi or Olá (hi or hello). The Brazilian oi is a very popular form of greeting and in fact, there is a telecommunications company in Brazil called Oi.

While it is informal and you wouldn’t use it with your boss, for example, it can be used among friends and family members. This shortened greeting doesn’t exist at all in European Portuguese.

ESL students are often amazed at how nearly any word in English can be made into a verb. It was the Americans who turned the phrase “look it up on Google” into the verb “to Google.”

Brazilian Portuguese seems to have taken a cue from the Americans in this sense. You’ll often find Brazilians turning phrases into a single verb form:

Which Comes First, The Pronoun Or The Verb?

It’s way more common for Brazilians to use the gerund than it is for Portuguese from Portugal to use it. In that sense, Brazilian Portuguese is more similar to English.

Spelling And Vocabulary Differences Between European And Brazilian Portuguese

There are lots of words that are spelled differently in European and Brazilian Portuguese:

And then there are words that have no relation whatsoever between the two languages, even though they mean the same thing:

When traveling by plane, train, bus or car, you’ll notice some big differences in Brazilian vs. European Portuguese.

When driving on the road in Brazil, you’ll see signs for a return exit marked retornar, but in Portugal, they give it a more literal spin by calling it inversão de marcha (reversing gears).

Portuguese is a rich language and learning it means you’ll be able to communicate in ten different countries, not just Brazil and Portugal.

But if you’re not sure which Portuguese to learn, then you might want to consider your goals.

If you know the answers to those questions, it might help you decide which form of Portuguese to focus on. It's a bit like the process of choosing between Spanish or Portuguese.

Be aware that even though the language has these differences, they’re easy to adapt to in a short period of time once you get the basic grammar down. It’s just a matter of fine tuning.

You’ll be able to make adjustments in pronunciation, spelling and other differences with just a little practice. And in Brazil in particular, any attempts you make to speak Portuguese will be met with a warm smile of appreciation. The important thing is that you’re making the effort to communicate. So, smile back and keep trying☺