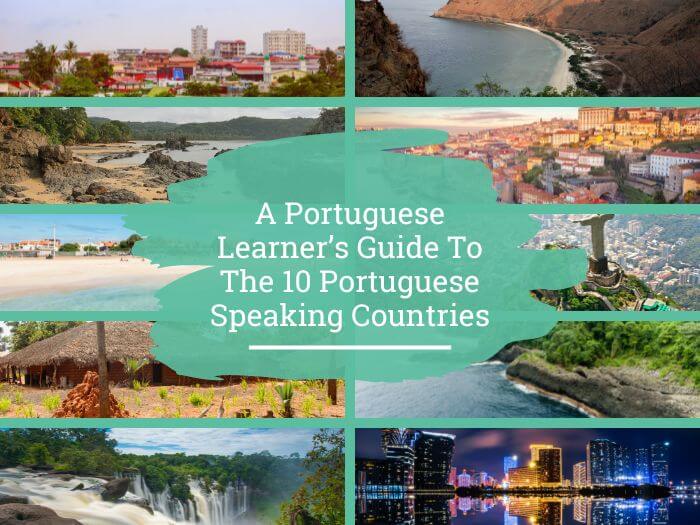 If you're learning Portuguese, did you know that there are ten Portuguese speaking countries in four continents?

If you thought Portuguese was only spoken in Portugal and Brazil, you should get up to date right away. As you read this, you might be asking: where else do people speak Portuguese?

There are 8 more countries where Portuguese is the official language, which makes it present in 4 continents. Let’s take a look at ten Portuguese speaking countries, their characteristics and what makes them so interesting for Portuguese learners.

In the table below, you'll see a quick overview of those ten Portuguese speaking countries:

Beside these countries, you can find opportunities to speak Portuguese in other nations too, though not as an official language, such as China, India, Malaysia, Indonesia, Caribbean, Spain, France, Germany, South Africa, Japan, Switzerland, the United States, Canada, Australia and South America.

Although Brazil and Portugal are not the only two Portuguese speaking countries in the world, they are still the two most prominent. That's not only because they still have bigger populations, but also for their relevance as global players and destinations chosen by tourists and immigrants from all over the world.

The number of foreign residents in Portugal has increased, amounting to more than half a million immigrants. And there are more than 1 million foreigners living in Brazil, which is known as a multicultural society and a very welcoming nation. So now let’s learn a little bit more about Brazil.

Brazil is in South America and it's the largest and the most populated country which speaks Portuguese.

It's the fifth biggest territorial area in the world, almost as big as the South American continent itself. In the Americas, it is the only country where Portuguese is the official language. Eight out of ten people who speak Portuguese in the world are Brazilian.

Brazil offers lots of attractions that amuse and enchant tourists from every part of the world. Music, food, landmarks, 7,500 kilometers of coastline full of paradisiac beaches and cultural events make Brazil one of the most appealing and exciting tourist destinations.

The most famous tourist capital in Brazil is Rio de Janeiro. It has been the set for movies and series, is also present in famous songs internationally.

That’s why Rio is so popular around the world. Its wonderful coastline and natural beauty attract millions of visitors for holidays.

Check out this list of special must-see sights for you to visit Brazil:

Brazil is considered a big market and the largest economy in Latin America. It is the most cited science base outside the G8, the group formed by the United States, Canada, France, United Kingdom, Germany, Italy, Japan and Russia.

It is a country that takes part in important world economic blocs, for example, the Southern Common Market (Mercosur) and the Union of South American Nations. Moreover, it is the letter B in BRICS, formed by the world’s biggest emerging economies.

The growth of a nation is supposed to be followed by the growth of its mother tongue. By the year 2050, it's expected that the native languages of BRICS countries will be dominant for business. So, Portuguese is going to be one of them. Now let’s get to know Portugal, where this language was born.

Portugal, The Birthplace Of Portuguese

Portugal is in the southwest coast of the European continent and it includes the group of islands Madeira and Azores in the Atlantic Ocean.

It's the third most populated country which speaks Portuguese. In Europe, it's the only one where Portuguese is the official language.

You can quickly get to Portugal from any European capital. There you can find lots of attractions such as gastronomy, wines, landmarks and 850 kilometers of beaches.

Let’s get to know some of greatest ones:

Portuguese was born in Europe, became Brazilian and now it's expected that it will be more African by the end of 21st century. Well, if we consider that six out of nine Portuguese-speaking countries are in Africa, that makes sense.

In total, there are six African countries reinforcing the Portuguese language, but Angola and Mozambique are the two main reasons for this “Africanization” of the language, because of demographic growth.

Let’s get to know a bit about all of them, starting with Angola.

With a great cultural diversity, Angola has almost 30 million inhabitants speaking several languages, among them the official one, Portuguese. Situated in the western coast of the Africa continent, it is a very rich country in mineral resources.

Angola is also one of the most diverse biomes in Africa, full of savannas, tropical forests and sea ecosystems. For example, the country is home to Mayombe forest, the second largest in the world, only behind the Brazilian Amazon forest.

Let’s get to know some of the main attractions in the country, chosen by its population as the Seven Natural Wonders of Angola:

Known as the “Indian Pearl”, Mozambique is a country in the east coast of Africa, where it skirts the Indian Ocean, separating the country from the famous Madagascar Island.

There, the architecture, music, literature and handicrafts stand out, along with stunning seascapes at the coast and inland landscapes, full of rivers, lakes, beaches, undersea species, fauna and flora.

That’s why there are special ecotourist routes to discover in Mozambique:

Guinea-Bissau is a country in West Africa with several ecosystems: mangroves, forests, savannahs, sand dunes and aquatic zones, which make this country a great destination for ecotourism.

There you can find national parks and the archipelago of Bissagos, a group of about 88 islands and islets located in the Atlantic Ocean, declared a UNESCO biosphere reserve. Here are some of the best places to visit there:

The main official language in Equatorial Guinea is Spanish, but the country adopted Portuguese as well to become a member of the Community of Portuguese Language Countries and offer professional advantages of being a member to its citizens.

Located on the west coast of Central Africa, the country has an insular and a mainland region. In the Gulf of Guinea there are the islands of Bioko and Annobon, a small volcanic island.

Bioko Island, where the country’s capital Malabo is, and the largest port city of Bata are the most interesting places in Equatorial Guinea.

Let’s check out places to visit there:

Let’s call it Cabo Verde, in Portuguese, the official language of the government and the media, although most people there speak Cape Verdean Creole on a daily basis.

Well, at least the ones who still live there, because twice as many Cape Verdeans live abroad than in the country itself, mainly in the United States, Portugal and France.

The archipelago is made of ten volcanic islands in the central Atlantic Ocean. Among them, the largest and most populated is Santiago, home to the nation’s capital Praia that hosts the embassies of 13 countries such as the USA, Brazil and some European nations.

As it is an island country, there are several ports and airports. The country has four international airports connecting the island to Africa, America and the main European cities. By the way, it's only 4 hours away from Europe and America by plane.

The coastline has 55 kilometers of beaches, so you can find one for your dream vacation. Almost all islands offer great experiences, such as Sal Island, the most popular, where you can visit Santa Maria Bay.

Africa's second-smallest country, Sao Tome e Principe is a country made up of two main islands and some islets in the Gulf of Guinea, off the western coast of Central Africa, located right on the Equator.

There is even a landmark pointing out exactly where it crosses the island, in Ilhéu das Rolas.

The coast has several deserted beaches, one of them is Jalé, where you can go camping and appreciate giant sea turtles. Tourism has been expanding with the increase of foreign investment. Large resorts have been built on the beaches of São Tomé and Príncipe.

Let’s get to know some good places to visit there:

Let's finish this world tour of Portuguese speaking countries with a visit to two places in Asia where you'll hear Portuguese.

Timor Leste is an island country in Southeast Asia, close to Australia, its southern neighbour across the Timor Sea. Most urban populations of this sole independent Portuguese-speaking Asian country live along the coastline.

Timor Leste was born as a country in 2002, so it is one of the most recent nations on Earth.

Let’s discover some emblematic places in this newborn country:

Macau, The “Las Vegas Of The East”

Although Macau is an administrative region of China, it retains a separate government and economic system.

Portuguese is the official language, but Cantonese, a variety of Chinese, is largely spoken. The region is on China's southern coast and consists of Macau Peninsula, Taipa and Coloane.

Considered the most densely populated region in the world, the territory is highly urbanized, mostly built on land reclaimed from the sea. The majority of the population lives in Macau Peninsula.

Known as “Las Vegas of the East”, it has become a destination for gambling tourism, even greater than the famous Vegas, making Macau one of the richest economies in the world on a per capita basis.

The exclusive influence of Portugal and China makes Macau unique in architecture, recognized by UNESCO as a World Heritage site.

Another legacy from these two countries is tradition and culture:  a collection of holidays, festivals and events, such as the Macau Grand Prix, similar to Monaco's, and the most important, The Lunar Chinese New Year.

As you have just read, nowadays Portuguese is one of the most spoken languages in the world, figuring in the top 10 ranking of languages, amounting to around 250 million speakers.

Unfortunately, around three thousand languages will disappear during this century, but Portuguese is definitely not in this list.

The language has not only been surviving as time goes by, but it is also rising. It is supposed that the number of Portuguese speakers will double by the end of the 21st century, reaching the mark of 500 million.

So, it’s high time to be part of this community of Portuguese speakers – yet another reason to learn Portuguese! And what better way to do it than through StoryLearning.