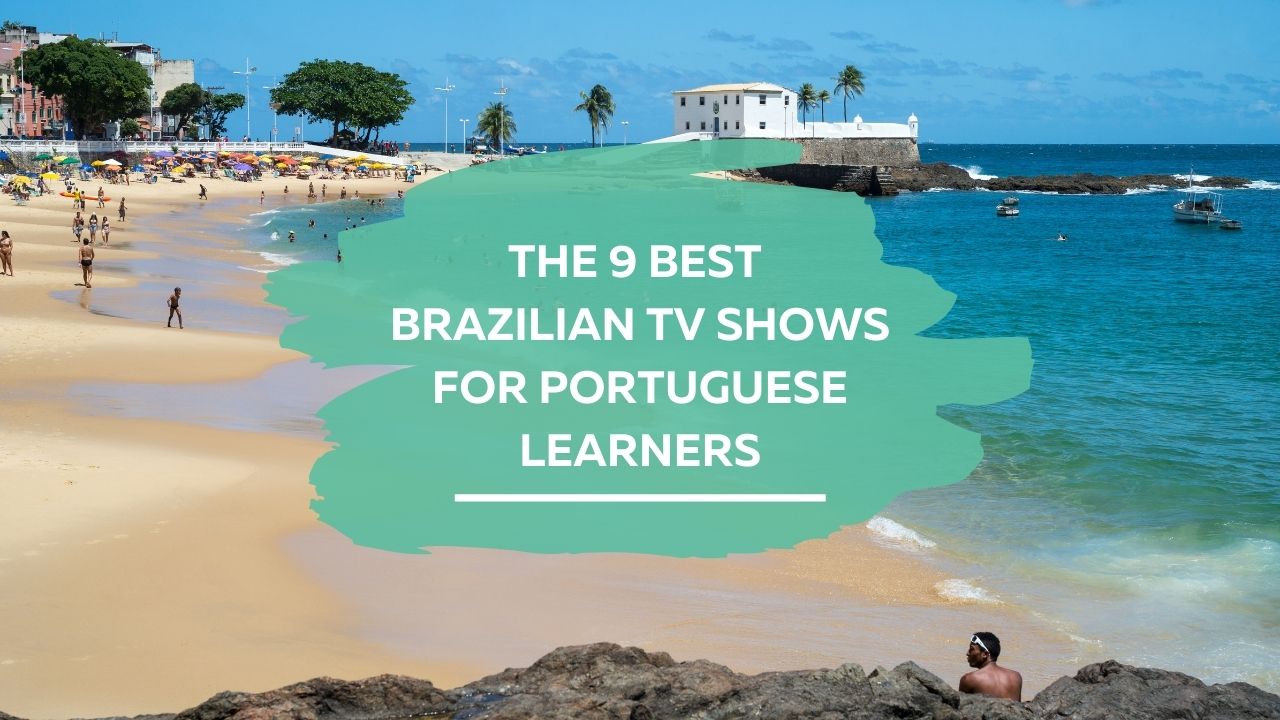 If you’re learning Brazilian Portuguese, then tuning into one of Brazil’s TV shows can amp up your language skills. TV shows aren’t just for zoning out. They can be amazing language learning tools.

Brazil has a rich history of telenovelas (soap operas) which are wildly popular across the country. And Big Brother Brazil (BBB for the initiated) is one of the most popular shows of all time in Brazil.

In recent years however, Brazil’s TV production has geared itself towards international audiences. And has produced some very compelling storylines, not to mention showcasing the talent of Brazil’s actors and actresses.

There are many reasons why watching Brazilian TV shows can help your Portuguese. For one, it attunes you to hearing Portuguese the way that native speakers use it. And not how it’s spoken in your language classes.

Secondly, it exposes you to expressions and slang that you wouldn’t hear in other contexts.

There are so many different Brazilian TV shows to choose from, from reality TV to futuristic dramas to historical dramas to political and entertainment docuseries and more. So I've put together a list of the 9 best shows available for streaming right now.

For a quick overview of some of these best Brazilian TV shows, check out the infographic below. And then keep scrolling for more details and a preview of each show so that you can pick the right one for you!

This series is set in a dystopian world where only 3% of inhabitants of an impoverished area called The Inland are allowed to leave its confines and make it to the coveted utopian virtual reality called The Offshore.

The series came out in 2016, Pedro Aguilera created it and it stars João Miguel and Bianca Comparato,

Some say this show's aim is to reflect the stark reality of the economic struggles of Brazil’s working class in a country of grave inequality. Or maybe the director just wanted to make a dystopian thriller. Either way, it makes for great entertainment.

Released in 2018, created by Jose Padilha and Elena Soares and starring Selton Mello as Marco Ruffo, a police officer determined to get to the bottom of what turns out to be the most extensive money laundering scandal in Brazilian history.

Based on a true story and featuring the dramatized details of the famed Operation Carwash that took down several prominent businessmen and politicians across Brazil in a sting that represented a turning of the page in Brazil’s history of corruption.

A fantastic representation of a situation that helps to explain the current political climate in Brazil.

Released in 2020, Raphael Montes created this series which starrs Tainá Müller as Veronica.

This drama tells the story of a married police clerk whose life is turned upside down when she receives a strange phone call from a young woman asking for her help. And who later turns up dead from suicide.

Released in 2021, created by Carlos Sandanha and starring Marco Pigossi as Eric, a cop who sets out to discover how his wife died when the circumstances of her death prove to be suspicious.

From then on, he begins to have strange and inexplicable encounters, starting with a mythical pink dolphin, a mermaid, a one-legged cripple who appears and disappears at will. And eventually, the devil himself.

A modern retelling of Brazil’s rich folkloric history with knockout performances by its cast, this show will hold you in suspense until the last scene!

Coisa Mais Linda was released in 2019 and created by Giuliano Cedroni and Heather Roth.

This series stars Maria Casadevall as Malu, a young woman from Sao Paulo who travels to Rio de Janiero in the 1950s to start a business with her husband, only to find that he has abandoned her and run off with the money.

Rather than return to her hometown, she stays in Rio and opens a bossa nova club. This show takes you back to the heyday of Rio during the time of the invention of bossa nova, Brazilian jazz. And when its beaches first attracted the attention of international jetsetters.

This reality TV show is about the ultimate “blind date” where singles are matched and married without them seeing each other first. The show came out in 2021 and husband and wife Camilla Quieroz and Klebber Toledo host it.

32 individuals participate in 10 speed-dating sessions. And meet their potential match’s families to answer the ultimate question: “Is love blind?”

This is a great show to help you understand conversational Brazilian Portuguese. And to pick up a lot of vocabulary used for dating in Brazil.

#7: Anitta: Made In Honorio

Released in 2020, this docuseries is about the Brazilian mega pop star Anitta and her rise to fame. This show delivers the goods in a tell-all about one of Brazil’s biggest international pop musicians.

It features interviews with family and friends and footage of Anitta from her first concerts in the favela Honorio in Rio de Janeiro where she was raised to her ascent to mega-stardom.

Released in 2017 and created by filmmaker Yasmin Thayná, this show about Afrofuturism features black artists, academics and entrepreneurs talking about race and representation in Brazil. And how to create a better future for blacks in Brazil.

In a country where the majority of the population identifies as black or mixed race, this documentary helps to unravel Brazil’s history of race and racism. And offers thought-provoking conversations on how to move forward from here.

Released in 2022, this docuseries is about the controversial Brazilian football player Neymar da Silva Santos Junior. It includes footage of his athletic career and interviews with some of the world’s greatest players including David Beckham and Lionel Messi.

Neymar is a national obsession in Brazil. And this series will help you become familiar with him. And introduce you to the pressures and controversies of the sport.

Hopefully these 9 Brazilian TV show suggestions have whet your appetite. But if you need a little more convincing as to why you should watch TV to improve your Portuguese, here are three good reasons:

Tips For Getting The Most Out Of Brazilian TV Shows

Now that you know what to watch and why, here are some helpful viewing tips:

Brazilian TV shows can help you get further ahead in your language fluency.

By choosing a series that interests you and using it to help add to your vocabulary and listening skills as well as sharpening your deduction abilities, you can improve your language skills drastically.

With so many different choices of Brazilian series available, there’s something for all tastes. Pick one from our list, pop some popcorn and enjoy one of the most entertaining language learning lessons you ever had.