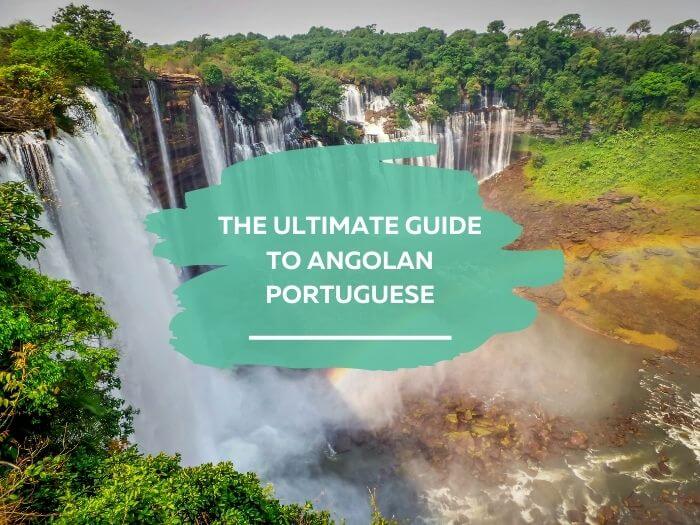 The Ultimate Guide To Angolan Portuguese

When you decide to learn Portuguese, it might be because it's so widely spoken around the world, with varieties such as Angolan Portuguese to discover.

Angola is a stunning country in Southern Africa with beautiful beaches, waterfalls, and wildlife. Colonised by Portugal in the 1500s, today Angolans are the second-largest population of African migrants in Portugal.

Likewise, there are a growing number of European Portuguese migrating to Angola. A 2014 census reported approximately 150,000 Portuguese living in Angola.

The two countries have a long history that includes a shared language: Portuguese.

If you’re planning a trip there or know people from Angola and want to be able to communicate better with them, or you’re just curious about Angola and would like to know more about it, then you’ll need to learn some Angolan Portuguese.

Why Is Angolan Portuguese Different?

Today, there are 46 languages spoken in Angola, the majority of which are Bantu derivatives. Portuguese, however, is Angola’s official language.

Plus there are six “national languages” which are predominantly spoken tribal languages including:

Words from the tribal languages are often mixed with Portuguese in day-to-day conversations and vary depending on what region you’re in.

So let's get started by taking a look at some pronunciation differences.

When listening to European versus Brazilian or Angolan Portuguese, sometimes the words they use are so different it’s almost hard to believe they’re speaking the same language.

Just like in the United States where they say “sneakers” whereas in the U.K. they say “trainers” or use the word “eraser” instead of “rubber,” European Portuguese, Brazilian Portuguese and Angolan Portuguese have some very different ways of expressing the same thing.

Let’s take a look at some classic examples:

Although, there are a very few differences in grammar between Angolan and European Portuguese, they do exist.

Portuguese pronouns tu and você are the two forms of the pronoun “you”.

In Angola tu is more formal than você. But in Brazil and Portugal, the opposite is true. In Brazil, it’s much more common to hear people use tu in the South, but in the rest of the country, it’s common for people to use the term você.

In Angolan Portuguese, the pronoun often goes before the verb, whereas in European Portuguese it goes after.

*You see both of these versions used in Brazilian Portuguese.

Another common example of when the order of the words is reversed in a phrase is the following:

Yet another way that European and Angolan Portuguese differ grammatically is that it’s very common for Angolans to drop the pronoun altogether (this is also common in Brazil).

For English speakers, this may seem strange, but in Portuguese the conjugation of a verb can tell you its pronoun, so it’s possible to drop the pronoun and still be clear about what you mean.

Sounds And Their Meanings

All cultures use sounds to express something without using words. The following are some common sounds Angolans will use to express different things:

Brazilians also use sounds such as:

Music is a great way to learn a language and to learn new vocabulary and terms and expressions. Each culture has different musical traditions that can help you become more fluent while learning more about the culture.

In Portugal, the traditional fado, or Portuguese jazz, captures a melancholic style of music with lyrics to match.

In Angola, there are three types of music you will typically hear in bars and parties:

And in Brazil there are many styles of music as well:

As you can see, Angolan Portuguese is a fascinating language for its mix of local tribal languages that make it unique and charming.

Though colonised by Portugal, it shares many similarities with Brazil in terms of having a slower speaking pace and more open vowel sounds. European Portuguese pronunciation in contrast, is faster with more closed vowel sounds.

The Angolan Portuguese language is rich and varied and its music and culture are definitely worth getting to know.