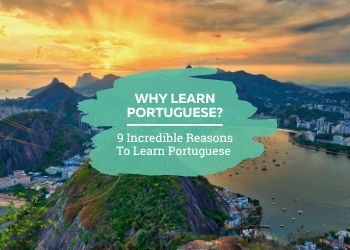 Why learn Portuguese? Well, by learning Portuguese, you open yourself up to a whole new world and culture.

Portuguese is a rich and beautiful language. Many people describe Brazilian Portuguese as having a melodic lilt.

There’s much to read, listen to, watch and experience through the ears of a Portuguese speaker. Here are 9 of the best reasons why you should learn Portuguese.

When you learn a new language, you’re also learning history. Portuguese is an amazing language and Portuguese language history is fascinating.

In Brazil you’ll find a mix of European, particularly Portuguese, Dutch, Italian and German sprinkled throughout the Southern part. The northern regions are heavily influenced by the Africans brought over by the slave trade. And the high concentration of indigenous tribes in states like Acre and Amazonas.

The words and phrases, customs and traditions borrowed from these cultures will provide you a rich and rewarding history lesson as you learn to speak Portuguese.

That’s because the Romance languages are all of Latin origin and have similar spellings, grammar and sentence structures.

Though the Romance languages share many commonalities, Spanish and Portuguese are particularly similar to one another.

#3 Deepen Your Appreciation Of Brazilian Music

Brazil has some of the most celebrated forms of music in the world. So listening to and understanding Brazilian music is one of the most popular answers to the question – why learn Portuguese?

When you’re able to understand the lyrics, you can appreciate it on a whole new level. Here are some styles and musicians to check out to help motivate you to learn Brazilian Portuguese:

#4 Work In Brazil & Connect With Your Colleagues

If you’re in Brazil for work, you’ll want to pick up Portuguese to be able to communicate with colleagues and for social events. Brazilians are very hospitable and will appreciate your efforts to speak their language.

They are also very social. So it will be normal to be invited to after-work gatherings, parties, barbeques. And even family vacation homes of close colleagues.

While many Brazilians in larger cities speak English, in the more rural areas of Brazil it’s harder to find fluent English-speakers. Depending on where you are, being able to communicate in Portuguese could make a huge difference in your ability to get by each day.

But even if you’re surrounded by fluent English speakers, being in-country is a great opportunity to learn a new language. You might want to consider taking a Brazilian Portuguese class to help you with your Portuguese pronunciation and grammar.

Soon you’ll be ordering rounds during Happy Hour and conversing comfortably with the rest of your colleagues.

#5 Advance Your Career With Portuguese

Brazil is part of the economic conglomerate of emerging economies that include Brazil, Russia, India and China. As these economies become stronger, their influence in international business and politics will become more prevalent.

For anyone who works this area of profession, learning one or more of the languages of the BRIC countries is a great skill to have for career advancement.

If you’ve married a Brazilian, you’ll want to learn Portuguese to get to know your partner’s native language and be able to speak to their family members during visits. This shows your appreciation of their cultural heritage.

If you’re planning on having children, ideally, they will be bi-lingual. So you don’t want to be the odd person out who doesn’t speak Brazilian Portuguese.

There are some wonderful Portuguese books and poems to explore and savour in their original language.

And of course here at StoryLearning®, learning through story is the key to getting fluent in any language, including Portuguese.

Here are some books to curl up with:

#8 Immerse Yourself In Brazilian Film

Brazil has a rich cinematic history and at their best, Brazilian films provide insight into the divisions between the country’s rich and poor and the layers of corruption that are a source of frustration for many citizens.

Brazil accounts for 47 percent of the size of the entire continent of South America. It also has nearly 7,500 km of coastline with beautiful beaches from the country’s northern to its southern coast.

Inland it has beautiful landscapes, rivers, wildlife, historical towns and is home to Christ the Redeemer statue in Rio de Janeiro, considered one of the Seven Wonders of the Modern World.

As you can imagine, travelling round Brazil and experiencing its sights authentically is a popular answer to the question, why learn Portuguese?

Here are some places to visit in Brazil if you’re planning a trip:

The Amazon is the largest rainforest in the world with an incredible diversity of plants and wildlife. Leaving from the city of Manaus, the state of Amazonas’ capital, are a variety of tours for all levels of adventure seeker. Or those who just want to take a leisurely ride down the Amazon River and spot monkeys and pink dolphins.

Located in the Northeastern state of Maranhão, this area is a protected national park due to its incredible sand dunes where fresh water gets trapped, creating beautiful patterns of water and sand and natural freshwater lakes in the middle of the desert.

This beautiful northeastern state is home to some of the country’s most coveted beaches.

From the surf haven village of Itacaré to the picturesque islands of Morro de Sao Paulo and Boipeba to the historic city of Salvador where you can find authentic acarajé, a delicious local street food made of dried shrimps and fried bean paste.

You’re likely to hear the berimbau, a simple musical instrument used to create rhythm in the Brazilian dance and martial art practice of capoeira, whose roots are in Salvador from the time of slavery.

And don’t forget to check out the Afro-Brazilian drum music of Olodum at night. The large percussion band are known to throw impromptu street parties, especially when it’s near to Carnaval.

Additionally, many of the old towns like Ouro Preto have several of their historic buildings preserved and many of the streets are still paved with cobblestone. It’s like walking back in time.

No trip to Brazil is complete without visiting the famous carioca city of Rio de Janeiro. Take time to sip fresh coconuts on its famous beaches of Copacabana and Ipanema.

Then head off to take the cable car ride up to Sugarloaf Mountain and take in the breathtaking view of the beaches and the 98-foot-tall Christ the Redeemer statue that is one of the Seven Wonders of the Modern World.

This national treasure shares a border with Argentina. And it's one of the world’s largest waterfalls at nearly 3km in extension. An 80m drop at the area nicknamed Devil’s Throat will leave you breathless.

So, Why Learn Portuguese?

Why learn Poruguese? Well, there are so many reasons to learn this beautiful language and these are just some of them. Now that you’re motivated, the only thing left to do is start learning! Boa sorte!

And if you want to learn Portuguese fast while having fun, then make sure you use the StoryLearning® method and immerse yourself in books in Portuguese.

As you read, you'll start to pick up the most important grammar and vocabulary of Portuguese naturally, without having to study verb tables or learn word lists.

Before you know it, you'll be ready for a travel adventure in Brazil or to immerse yourself into Brazilian TV series or movies. And you'll be the one to answer the question – why learn Portuguese!?