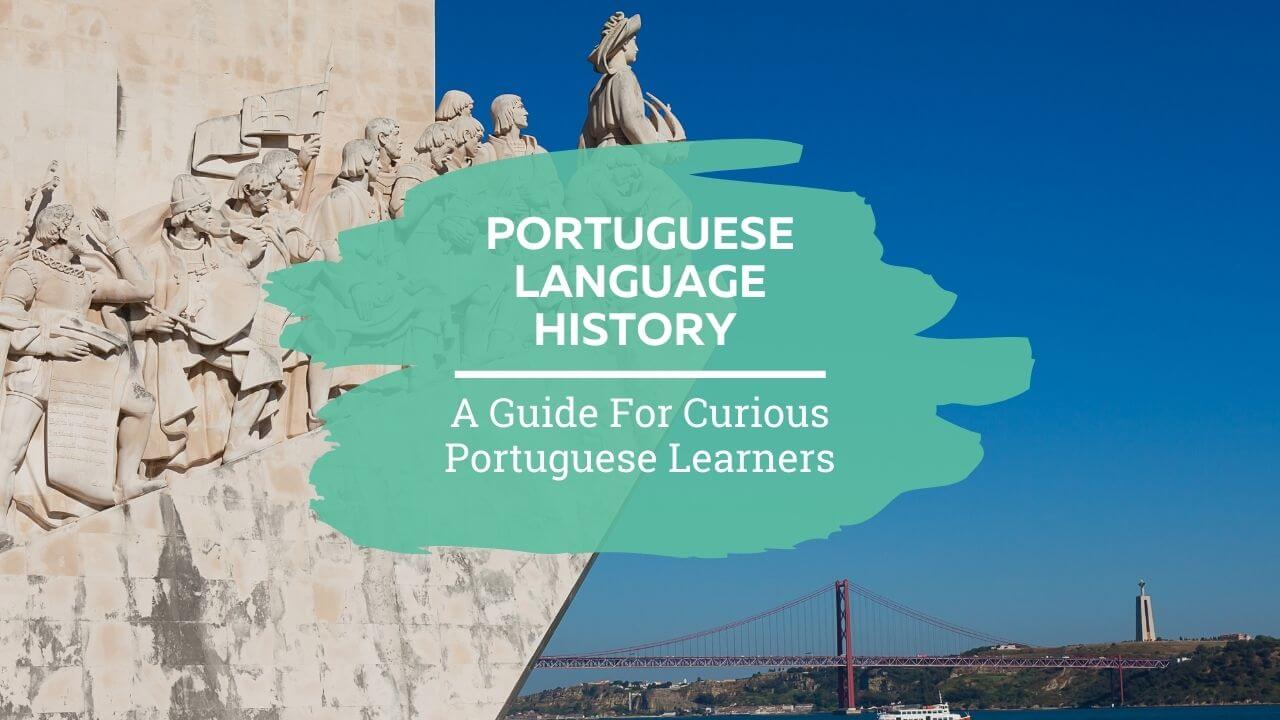 If you're learning Portuguese, then get ready to discover the fascinating story of Portuguese language history.

From its beginning in the Western part of the Iberian peninsula to today being the official language in 10 countries around the globe, including Brazil, the country that holds the largest number of speakers, the journey through its spread and development is a real page-turner.

Discover the answers to these questions in this post and get ready to impress with your knowledge of Portuguese language history.

How Did The Portuguese Language Appear?

At the height of their power, the Romans had a huge influence on language and culture across Europe and beyond. There’s evidence of Roman presence in Iberia, the location of modern Portugal, as early as 218 BC.

Throughout the duration of the Roman Empire, Roman reach spread across Europe, including in Iberia where Roman soldiers, merchants and settlers established cities. The Latin spoken by the Romans infused the languages spoken in this region and in various other areas.

Today, these Latin-based languages are the Romance languages, which include Spanish, French, Italian and Portuguese.

With a strong Latin base and similar grammar structure, a speaker of one Romance language has an easier time learning another one than someone with no previous exposure to a Romance language.

The eventual fall of the Roman Empire and the invasion of the Germanic tribes in the northern Galican region of modern-day Portugal had an influence on that region’s language that lasted for centuries. And is still present today.

In fact, until the 15th century, the language went by the name of Gallego-Portuguese. Afterwards, the Portuguese language was standardized and Galician became a dialect spoken at home in the northern region.

The Moors were another culture that influenced Portuguese. They invaded Iberia in the 700s. Their Arabic-rooted language had a strong influence on the Southern region of Portugal, particularly the Algarve and Alfama regions as well as the Fatima province.

The Spread Of The Portuguese Language

The Portuguese language spread through colonisation. The Portuguese navy was a formidable force and traveled far, conquering territories in Africa, Asia and South America.

Though many think of the Spanish, Dutch and British empires as being the most far-reaching, the Portuguese colonisation was one of the longest standing of this period, lasting nearly six centuries.

The Portuguese colonised first colonised territories in Africa in 1415. The last territory released from Portuguese rule was Macau, which was transferred to China in 1999.

The extent of Portuguese colonisation was so influential that across Asia and Africa, Portuguese became the standard language for administrative and trade communication particularly in Malaysia and Indonesia.

In India and Sri Lanka, Portuguese remained as a spoken language even after their independence from Portuguese colonisation. Until today, you can see shops in Goa India with Portuguese names. And the older generation still speaks Portuguese.

Today, Portuguese is the official language in ten countries:

However, a significant percentage of the population in 17 other countries speak it. These include:

In these countries, there is a large minority population of Portuguese-speakers due to proximity to a Portuguese speaking country as is the case of Spain, France, Uruguay, Venezuela, Paraguay and Andorra.

How Did Portuguese Become The Official Language Of 10 Countries?

Portuguese explorer Diogo Cao discovered Angola in 1484. Forts and settlements were established extensively throughout the country over the next century, with the trading post in the northern city of Soyo being an important foothold in the region.

Many of the slaves the Portuguese transported to Brazil to work the sugar cane fields were from Angola. In 1961, revolution was brewing, and the country was overtaken by the Popular Movement for the Liberation of Angola by 1975.

The Spanish and the Portuguese had ongoing disputes about ownership of territory in South America. The Treaty of Tordesillas settled this in 1494. It granted Portugal the territory of what became the country of Brazil and the rest of the continent to Spain.

Portuguese explorers discovered the uninhabited islands in the 15th century. And they became a stopover island used during the Transatlantic slave trade. The country gained independence in 1975.

Portuguese explorers colonised East Timor in the 16th century where it then became known as Portuguese Timor until 1975 when the Revolutionary Front for an Independent East Timor declared the country’s independence.

Portuguese explorer Fernando Po first spotted what is now the island of Bioko which is part of Equatorial Guinea in 1472. He began a settlement there with the intention of growing sugar cane.

However, conflicts with native islanders and a challenging climate made it difficult for settlers to establish a foothold there. And the area was abandoned until centuries later when Queen Maria of Portugal ceded the island and other areas to Spain in 1778 in exchange for an area in South America which today is part of western Brazil.

The territory of Equatorial Guinea gained independence from Spain in 1968.

From the 16th century, the West African country of Guinea-Bissau was ruled in some regions by the Portuguese while other areas remained under the control of the Kaabu kingdom and the Mali Empire.

It wasn’t until the 19th century that the Portuguese officially colonized the country and independence was declared in 1973.

The Portuguese first started using Macau as a trading post when explorer Jorge Alves arrived in 1513. The territory was largely undeveloped until the Portuguese arrived. And they started renting Macau from China’s Ming dynasty in 1557.

An essential part of Portugal’s presence in Asia, this annual rental continued until 1887 when Macau became a Portuguese colony.

In 1999, Portugal transferred the colony to China. But the long-standing influence of Portuguese rule is felt until today and reflected in the country’s architecture, art, food, culture, and of course, language.

Portuguese explorer Vasco de Gama landed in Mozambique in 1498. And the Portuguese settled and ruled the country, overtaking the Arab foothold in the region.

The country was ruled by the Portuguese until independence in 1975, the culmination of a bloody 11 year war. Angola and Portuguese Guinea began rebellions at the same time. So this period was known as the Portuguese Colonial War, which lasted from 1961-1974.

At the end of the 15th century, merchant Fernao Gomes landed on the islands and discovered a gold trade among the island natives and Arab traders. He established a port town between the islands and Portugal that lasted for centuries.

With so many countries across the globe having Portuguese as an official language, it's as relevant a language to learn today as it was during the height of Portuguese colonisation.

And if you're a traveller, understanding the language will enrich your enjoyment of the culture of countries like Brazil, Portugal or Mozambique. So learning Portuguese has many benefits and uses, from business to tourism.

So if you’re thinking of learning Portuguese, don’t hesitate! Dive right into this beautiful language whose rich and exciting history helped its spread throughout the world. And make sure you use the StoryLearning® method so that you can read Portuguese books on your journey to fluency rather than learning grammar rules!