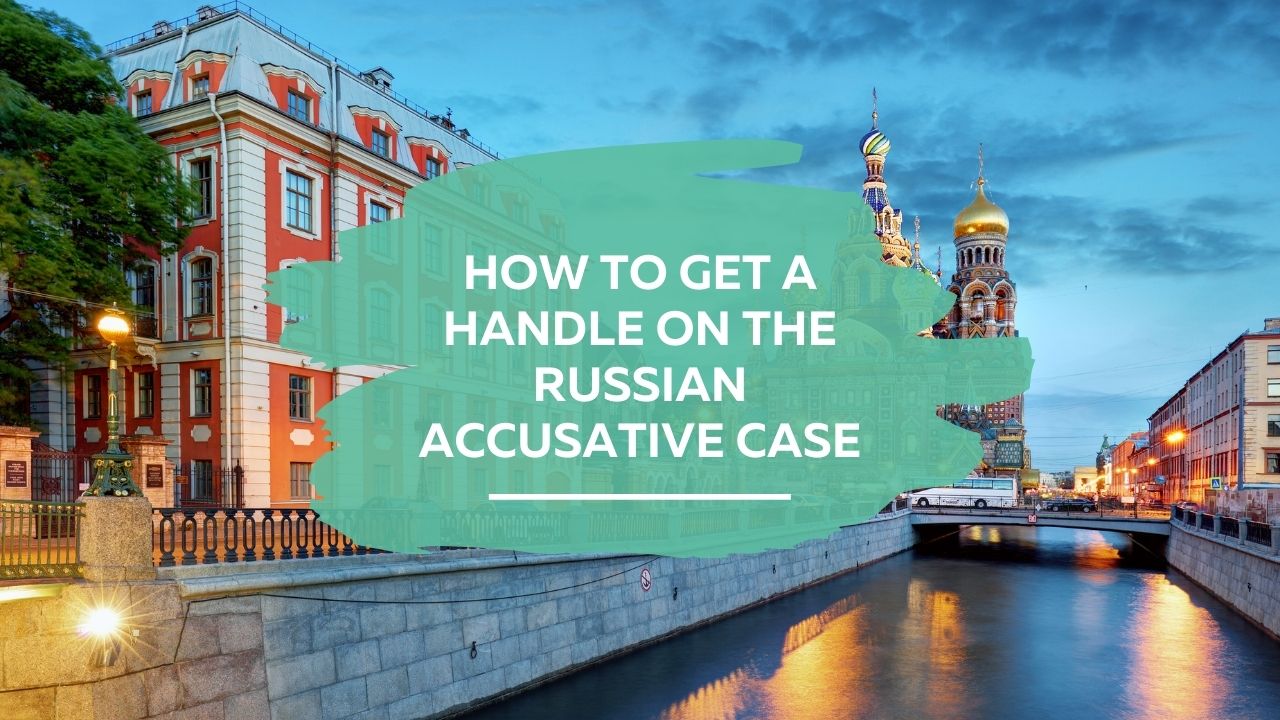 How To Get A Handle On The Russian Accusative Case

One of the most daunting things about learning Russian is facing the case system, including the accusative case in Russian.

In Russian, every noun has six cases that have some grammatical importance. And that can sound pretty intimidating, especially if you’re still not sure what case even is.

By the time you finish reading you’ll have learned:

So you’ll be ready to start using the Russian accusative with confidence and ease.

What Is The Accusative Case In Russian?

So your first question might be – what is a noun case exactly?

In the simplest terms, the case of a noun tells you what it does in a sentence. It’s similar to how we add ’s (e.g. John’s book) in English tells us about possession. You know immediately that John and John’s mean two different things based on how the noun ends.

The only difference is that Russian uses these noun endings a bit more than English. And cases are essential to really learning Russian the right way. So that brings us to the next question – what’s the accusative case?

In Russian, the accusative case is used to show that something is the object of a sentence. This basically a fancy grammatical way of saying that it’s the thing in the sentence that is receiving the action. In English, we indicate this through word order.

In these two examples, we know which word is the object because it comes after the verb. Placing it there shows that something “receives” the action. In Russian though, this is shown instead with case endings and with context.

Think about the following sentences.

All of these sentences use what’s left of the English accusative case. And we understand these intuitively, because when we hear “I saw she” or “Can you hear I” we can understand the meaning, but it sounds off to us and we know that something’s not right.

So English does have words that change by case too. The difference is that in Russian, these changes apply to ALL nouns.

So, how will you know when a word is in the accusative case in Russian? Simple! As with the genitive and all other Russian cases, the ending of the noun can change.

Knowing And Making Endings For The Accusative Case

The rules for the accusative case are actually pretty consistent. So, let’s take a look at them next.

Feminine Nouns With -A And -YA

First, I’ll show you how to make the accusative case for feminine nouns.

For Russian feminine nouns that end in -а and -я will change into -у and -ю.

And you can see it in a sentence here.

Now let’s look at the accusative case for masculine nouns. These have the most tricky endings for the accusative. For this group you have to know if the noun refers to something alive or not.

So the words брат (brother) and бык (bull) are animate nouns, but чай (tea), ухо (ear) and стол (table) are inanimate. It’s important to make this distinction between the two in Russian, because it changes how you make different noun cases.

If the noun is animate, then you add an -а to the end. This will make it the same as the genitive case.

You can see how it works in these sentences. You can even see the difference between “Victor” as the object in the accusative case or as the subject.

Accusative For Other Nouns

After you learn the rules for those two groups, there’s good news ahead.

To make the accusative case for all neuter nouns, inanimate masculine nouns and feminine nouns that end with a sound sign (ь), there’s no change at all.

That means that the accusative case looks the same as how you see it in a dictionary or in the nominative case.

Next, take a look at these examples:

Verbs That Regularly Use The Accusative Case

Since the accusative case is one of the most commonly used cases in Russian, there are also a whole lot of verbs that use it.

In fact, almost any verb that takes a direct object in English will have a Russian counterpart that uses the accusative case.

Here are some common examples:

In actuality, most verbs will use the accusative case, but it’s always good to know when to expect it. Of course, while some verbs will introduce it, it can come at other times in Russian as well.

So now that you know some of the verbs that use the accusative case, it’s time to talk about Russian prepositions.

Here’s a short list for you so you can see some of the most common ones:

And here are some example sentences:

So remember, anytime you see or hear these prepositions used in Russian, they’ll be followed by the accusative case. Keep an eye for them as you read and you'll quickly begin to develop an intuitive understanding of which prepositions trigger which Russian cases.

You may have noticed two prepositions on that list: в and на. These are very important for marking something’s destination.

Now that you know some of the important prepositions that use the accusative, let's go over how you use it to mark where something is going.

Talking About Where We’re Going With The Accusative

While the main purpose of the Russian accusative case is to mark the direct object, it is also used to show us where something or someone is going.

Think of it this way – when it comes to location, the accusative case answers the question “where to?”

When the accusative tells you where something is going in a general sense, you’re likely to see the prepositions на and в.

It’s important to understand that in all of these examples, there is a sense of motion going on. So you could also say that we use accusative to show that something’s location is changing.

This doesn’t apply to where something is though. So if someone is simply “at school” or “on the roof”, then you use a different case.

While the prepositions на and в play a huge role in showing where something is going, they don’t do it all. There are a few other prepositions that people use with the accusative to express movement:

And here are some examples in context: 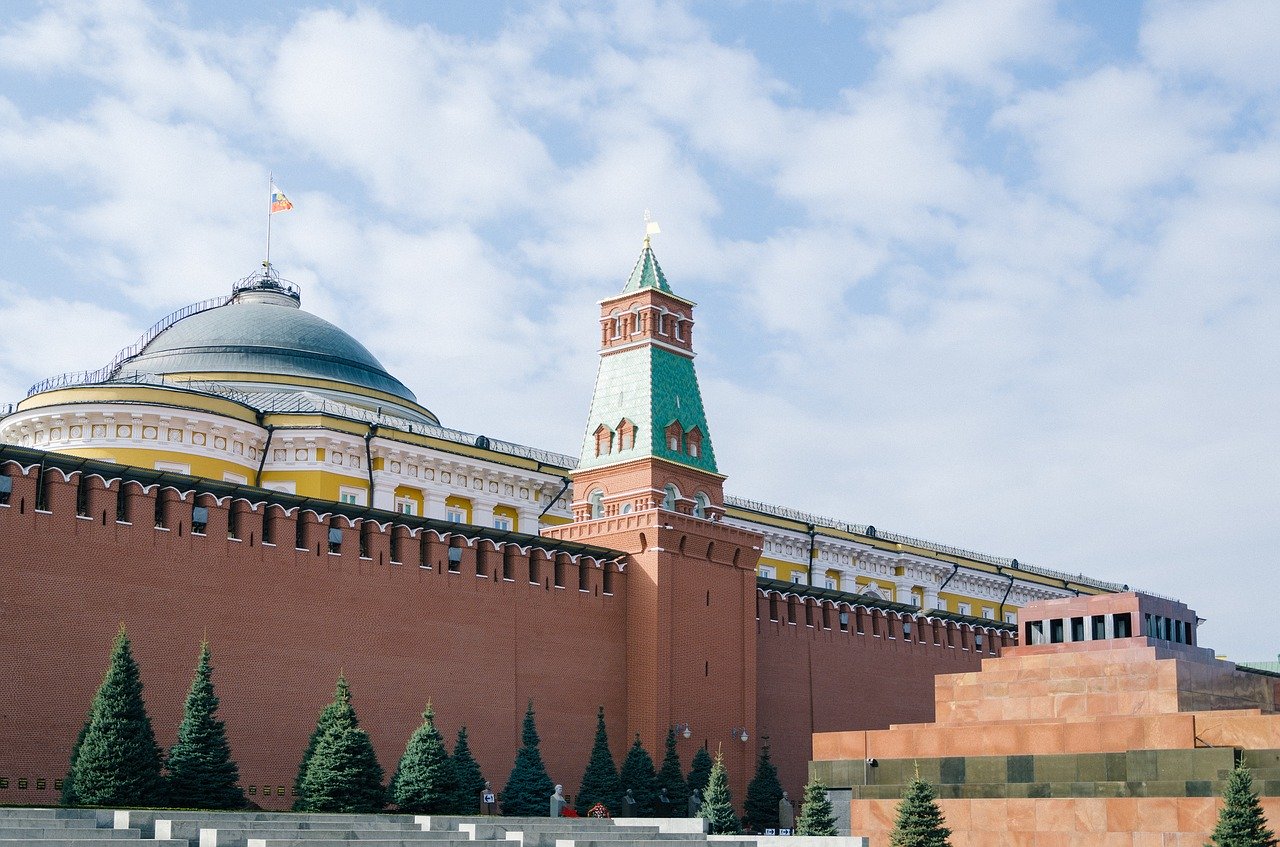 The Russian Accusative With Time

Up to this point, I’ve talked about the accusative case with direct objects and certain prepositions.

But the Russian accusative case can also be used to talk about time. This includes when something happens (or happened) and how long it goes on for.

When is This Happening? Когда

When talking about schedules and events, you’ll need the preposition в coupled with the accusative case. Here you can think of в as both “on” and “at” as it applies to both day and hours.

How Much Time? Как долго?

The last use of the accusative that I’ll mention in this post is also about time. But for this one, it’s to explain how long something has been going on for.

The big difference here is that there’s no preposition.

Going Forth With The Russian Accusative Case

Congrats, you got all the way to the end! Now you should have a strong overview of the accusative case. That may have been a lot of info to take in, but it’ll be sure to help you as you continue on your path of learning Russian.

The best way to master the accusative case is NOT to try and memorise long lists of rules.

Instead, just remember the basic situations in which it used:

As you spend more time reading and listening to Russian, these rules will become second nature to you. You’ll eventually develop an instinctive understanding of which cases to use when. That's the magic of StoryLearning®.

And don’t worry about making some mistakes. That's just the fear villain talking. Even native Russian speakers mix up the cases sometimes.

So just remember to keep practicing and be on the lookout for different uses of the Russian accusative case. Удача из удач! (Best of luck!)