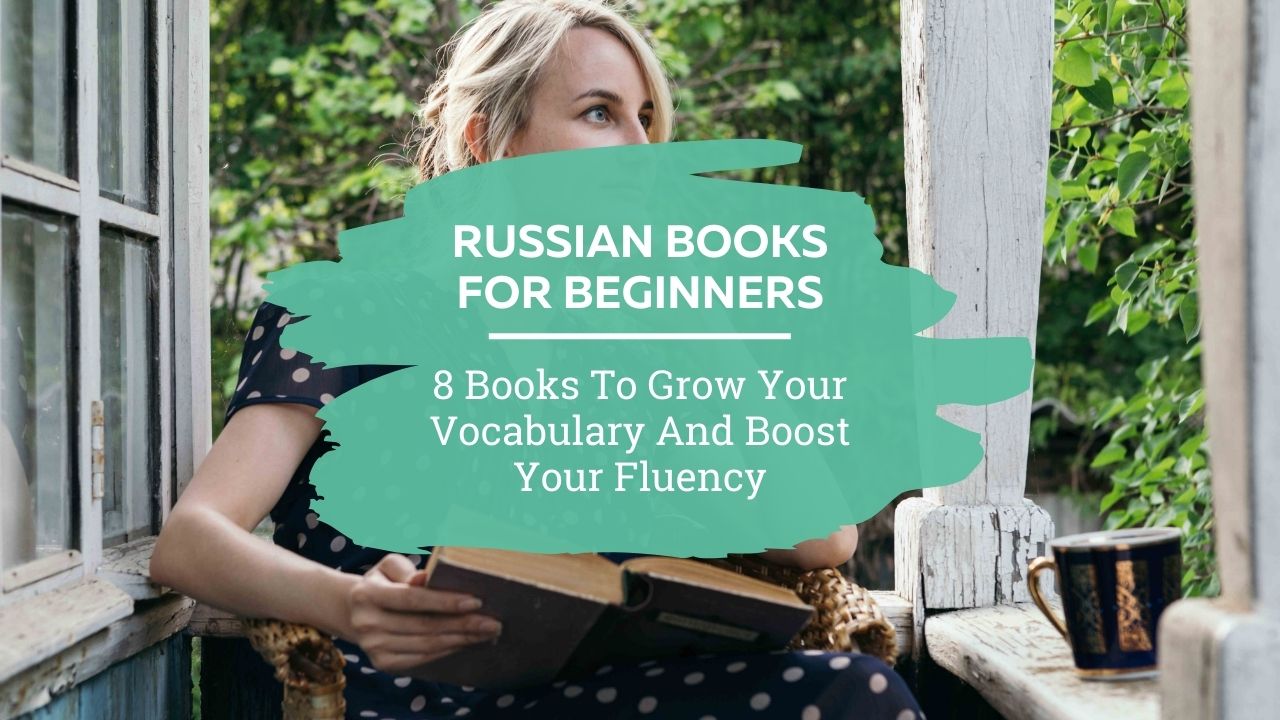 When you learn Russian, you can feel overwhelmed. There's so much to learn, from the alphabet, to the pronunciation without mentioning the grammar, that reading in Russian is probably the last thing on your mind!

The thing is, reading is one of the best ways to learn a language.

It’s a marvellous way to familiarize yourself with common grammatical structures as well as build up a good vocabulary.

It's true though that reading in Russian can seem really intimidating when you’re starting out. But I’ve chosen 8 Russian books for beginners that I think you’ll love if you’re in the early stages of learning the language.

And no – they’re not all Tolstoy and Pushkin!

So let’s check out these Russian books for beginners!

For a quick overview of these Russian books for beginners, check out the infographic below. And then keep scrolling for more details of each book so you can pick the right one for you.

The book is written as 20 letters from a Russian boy, Nikita, to his American penpal.

Through the letters he talks about his life – neighbours, friends, family, all the things they get up to on a daily basis. He also asks questions about life in America.

It’s nice and simple for Russian conversation practice – talking about yourself in an engaging way, as well as asking other people questions in Russian.

Okay, romantics… here’s a book for you: a Russian classic of romance and adventure at sea.

This is a beautiful Russian story – the kind that both kids and adults can enjoy.

Arthur Grey is a boy from a rich family who dreams of becoming a sea captain. Assol is a sailor’s daughter who is ostracized by her village because of her father's actions – justified actions, as you’ll find out.

Anyway, their paths intersect in a story about dreams coming true, no matter how silly or futile.

The story is narrated by an old man who dreams that someday a ship under scarlet sails will come to take the girl away.

Quite a change from all the revolutionary tales from Russia – but sometimes we need an imaginary world, too, don’t we?

Apparently even the Soviet censors loved this book – interesting!

It was also made into a ballet, and in St Petersburg there’s a massive Scarlet Sails celebration each year.

Next up, you simply have to read at least one Russian classic, so I found this one that’s been adapted for elementary readers.

By A S Pushkin  (adapted by Olesya Baltak)

Yes, you can read Pushkin! If you don’t know him, he was a very famous Russian writer and poet known as a master of parody.

His books are fascinating and enlightening and he is practically the symbol of Russian culture.

This story, The Queen of Spades,  is a about a Russian officer of German ancestry who finds out that an old lady possesses mystical knowledge that would enable him to gamble without risk and to know the deepest forbidden truths.

Because we all want that – right?

When she refuses to reveal the secret, he threatens her with a pistol and she dies of fright. What happens next…well, read the story!

There’s actually a series of these readers and they come with  engaging “pre-reading” and “after-reading” exercises – useful to get your bearings and then reinforce what you learned at the end.

Speaking of mystical things, have you ever heard of this Russian legend?

By Irina Ivanishko and Maria Thompson

She’s an old lady who lives deep in a forest in a hut on chicken legs.

In Russian folk tales, Baba Yaga is portrayed as a scary witch who eats children, although they usually manage to escape at the last minute!

The book is a great choice if you want to learn something about Russian culture while you practice your reading, and this version was specially edited to be easier for beginners, using simpler language than the original story.

Another thing I like about this book is it comes with an MP3 audio recording – always an excellent way to enhance your learning experience!

This is right in line with my own methods.

In this book you will find 8 short stories from a variety of compelling genres, from science fiction and crime to history and thriller.

It’s a lot of fun to read and you’ll pick up tonnes of useful new vocabulary.

I wrote this book especially to help improve your Russian comprehension, because yeah – I know how hard it is in the beginning!

And if you love the beginner book, there’s also an Intermediate one.

Similar to these is 101 Conversations in Russian – also a mystery story, but it’s written in the form of dialogue between the characters.

There’s a range of these Easy Readers; let’s see this one…

Svetlov is a man who spends months on far away expeditions in the thick and gloomy taiga. It’s lonely out there  and he lives for the moment that he will see his love, Sonya.

After coming home from one expedition, he finds that Sonya got married to a geologist. Ouch.

He later goes on another expedition, this time with Sonya’s fiance. When the fiance gets hurt, Svetlov has to choose whether to carry him, or leave him to get his revenge.

What would you do?

If you’re tired of folk tales and history, here’s something modern for you…

The title translates as “The Story Sensation” – it’s part of a series of 3 rather unconventional Russian textbooks.

They’re fun detective stories written in contemporary language that’s conversational and witty – no, nothing boring about them!

The story follows a Guadeloupean banker named George who embarks on a journey leading to a series of very peculiar events.

The various characters come from different cultural backgrounds and they meet up in Guadeloupe, Russia and Europe.

They lead normal lives, but also fight the world's evil, of course!

For the final book, I want to add something a bit different that you may find useful.

Red Kalinka is a Russian school based in Málaga, Spain and they produce their own self-published reading material.

What you get here is a series of graded books that include Russian texts with translations in English,  as well as audios on CD, so you can read and listen at the same time.

What I like about these is that they start at A1 level – helpful when it isn't easy to find absolute beginner books in Russian that aren’t fairytales!

This one follows Patrick, a foreigner living in Moscow. There are chapters like ‘Patrick and his friends’, ‘Patrick’s first winter’,  ‘Patrick goes to the theatre’.

What’s also cool is they have a range of Russian classics  – same format, but starting at B1 level.

So there you have it, the 8 best Russian books for beginners. Developing your reading skill in Russian will give you access to one of the world’s great literary traditions.

In the beginning, you won’t be ready to tackle the classics, but there are many other options that can help give your Russian a boost! From courses that teach through story to books for advanced learners, there's plenty to choose from.

For tips on how to read for fluency in a foreign language, check out the 10 rules of StoryLearning®.