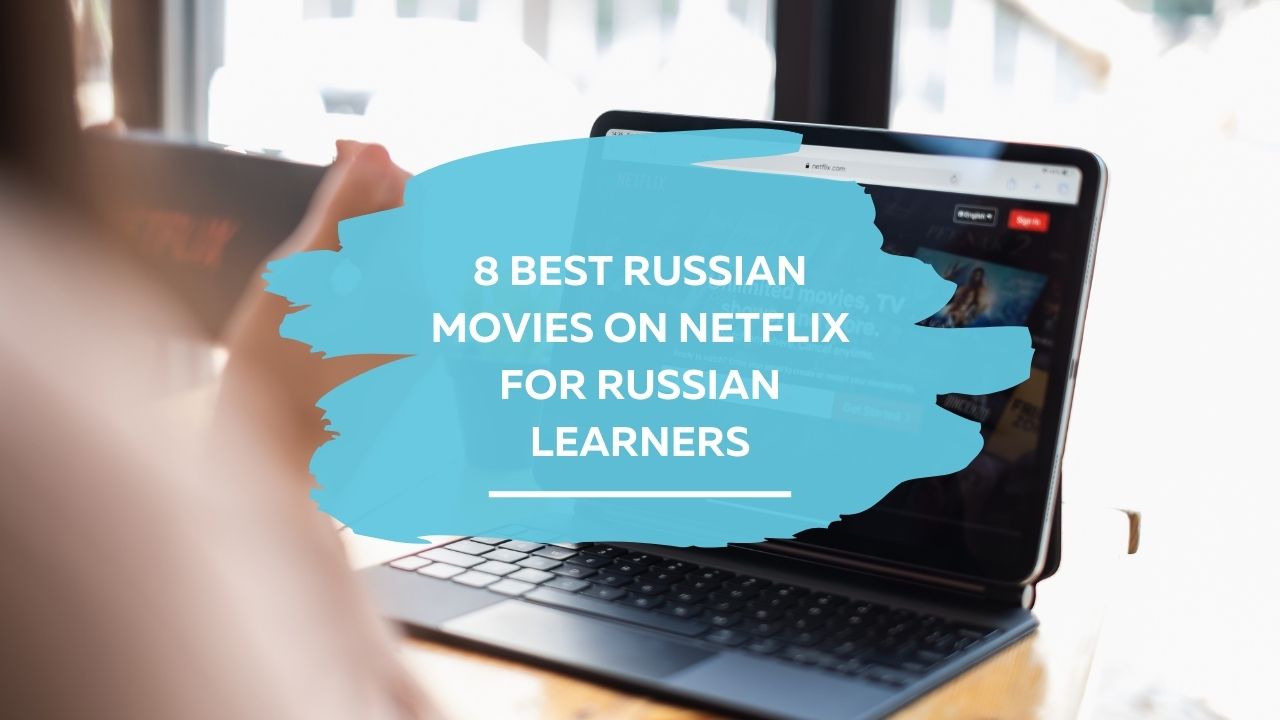 If you’re learning Russian outside of Russia, first of all: hats off to you! It’s a bold move and I admire you. Depending on where in the world you live, you might battle to find native Russian speakers to listen to… and hearing native speakers is something you really need!

Of course, it’s easy enough to get hold of audio books and watch YouTube videos. But nothing compares to movies when it comes to drawing you into the real Russian world from the comfort of your couch. So… how do you find them?

Netflix is a powerhouse when it comes to foreign films and they have some fantastic Russian-language shows. How many are actually available to you depends on your country, but there are always new ones being added. Start with what you have!

In this post, you'll discover 8 of my favourite Russian movies on Netflix. And at the end, I’ve included a bonus cool classic that you can watch on YouTube.

Now, some Russian movies will be easier to follow than others, but no matter what your level, just keep watching – this is immersion time!

By the way, if you're getting started in Russian and want to get to conversational level fast – minus the heavy grammar – look out for my story-based beginner course launching in September: Russian Uncovered. Click here to find out more.

This is a cool show! Set in Moscow, 2029, robots have become an ordinary part of human life – even replacing them in menial jobs. They help raise children, work as security guards, chefs and lovers.

A broken family accidentally becomes the owners of a unique cutting-edge robot being sought by a lot of bad guys, homicide detectives and the Russian robotics firm that bought her.

‘Arisa’ is programmed to protect herself and her adopted family at all costs, so when she bonds with a 5-year-old after escaping and killing a man, a lot of people are upset.

Meanwhile, the family's teenage son gets involved with an anti-droid militant group who are determined to rid the world of robots.

There’s plenty of suspense, really interesting characters and great acting – even from the little girl. You’ll hear Russian vocabulary not only about robots and technology, but also on the themes of family values and ethics.

While investigating the mysterious death of a teacher, a seasoned detective gets caught up in the world of a dangerous virtual reality game that the students play.

Although the teacher’s death looks like a suicide, the detective suspects the class is hiding something. He decides to do some undercover work, posing as a teacher.

The dialogue is quite easy to follow, so you should manage as an upper beginner. You’ll also hear plenty of gaming language and get an idea of how Russian teens interact at school – bullying included.

This series is based on a bestselling novel. An unknown and deadly respiratory virus turns Moscow into a city of the dead, forcing Anna and her boyfriend to flee to safety. They head for a lake in Russia’s far north with a shaky band of relatives and neighbours.

Meanwhile, all entrances to the cities are closed, money loses value, people are fighting and looting and there are aggressive gangs of marauders everywhere.

The series follows the group of survivors as they try to make it with diminishing supplies of food and fuel. It’s a chilling apocalypse drama with great characterization, some romance and the best part: no zombies. If you can take it after the year we’ve just had, this is a good one to learn vocabulary for emotions like fear and regret!

A young Moscow police academy graduate is elated when a legendary detective takes her on as a trainee… but his methods aren't anything like she imagined.

He’s reclusive, antisocial, mentally unstable, and has a secret method for hunting down serial killers.

It’s pretty violent, but there’s a great dynamic between the two lead characters and you’ll get an interesting glimpse into Russian life. If you’re a beginner, you might find some scenes a bit fast to follow without captions.

This 4-part tragic drama is a steamy thriller about star-crossed lovers from different social backgrounds. It starts as a summer fling between a struggling poet and a big city girl, but quickly grows in intensity. Her family won’t accept him, making her choose.

Summer ends and she returns home, eventually marrying a wealthy friend of her dad’s. The poet tracks her down and things get messy.

The story spans a number of years as they try to find ways to be together, getting themselves into increasingly dangerous situations that culminate in disaster.

Great acting and well-paced – an entertaining series you could watch in a couple of nights. Rated 18+

“Fartsa” is a criminal drama about fartsovka – a widespread phenomenon of illegal trading in foreign goods from the 50’s to the 80’s. In this case: trading in contraband like Western clothing and bootleg recordings of American music.

Set in early 1960’s Moscow, the series follows four childhood friends who decide to go into business together after one of them gets heavily in debt to mobsters. They sacrifice everything, but the more successful they become, the further they get from their real dreams.

The series is full of energy, a good soundtrack and great vocabulary of the era. It’s refreshing to see Russia depicted in a far more colourful way, with relatable characters. Nice one for upper-beginners.

A reckless wealthy Russian playboy, Igor, is arrested for street racing while on drugs. His father pulls strings to get him an apprentice job with the police, instead of a prison sentence, under threat that he’ll lose his inheritance otherwise.

Igor realises that he’s pretty good at police work and it forces him to grow up and lose his arrogance. His job soon takes him down a dark road, though, when he uses his newfound skills to investigate a tragedy from his own past.

You’ll enjoy this best if you’re at an intermediate level or higher, as they speak pretty fast. But it’s a good opportunity to hear Russian street slang. It also gives interesting insights on the decadent lifestyle of the kids of Russia’s oligarchs. 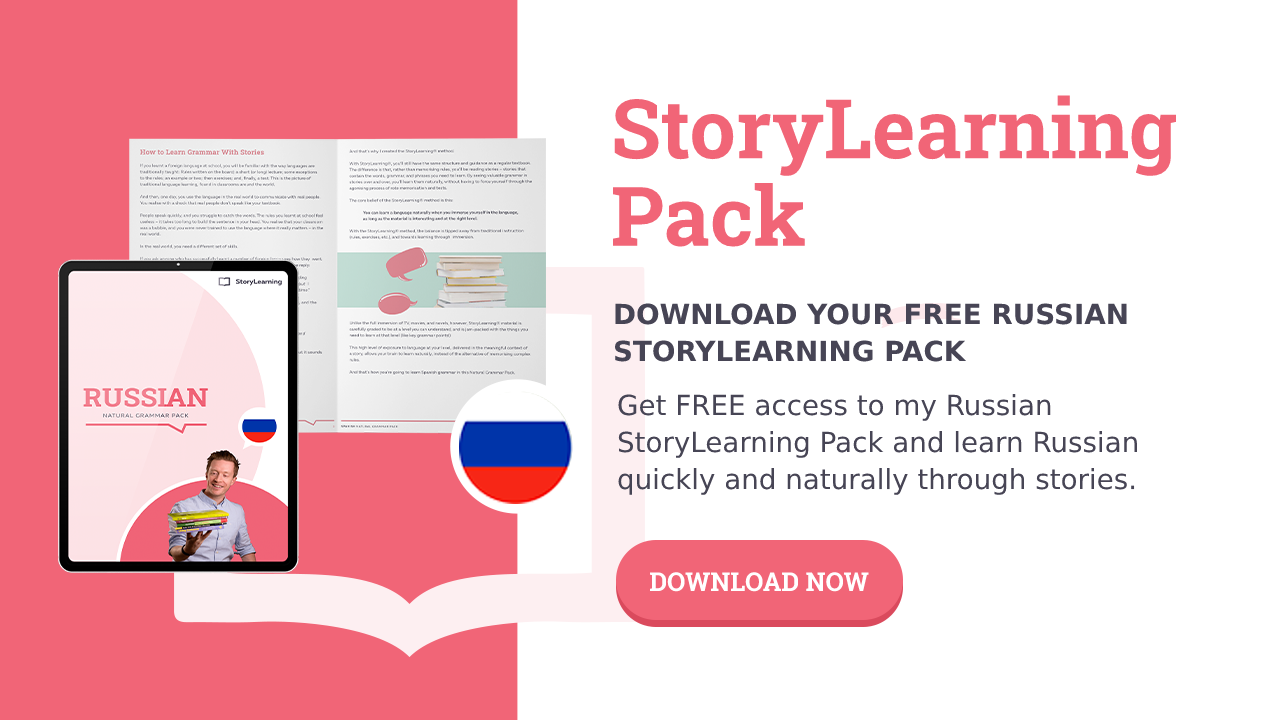 If you like docudramas, this is an excellent one to watch. Soviet fighter pilot Yuri Gagarin was the first cosmonaut to ever venture into outer space. He was only 27 when he blasted off into space, not knowing what fate awaited him.

The truth about his preparations and the first days in orbit, however, is shrouded with inaccuracy.  This movie gives a step-by-step record of the events of April 1961 – with archival film footage as evidence.

The movie has some great flying sequences, and you learn details about Gagarin’s life before he was chosen for the mission, as well as how he prepared. Very interesting to watch as a Russian learner – space vocabulary is not something you hear every day!

Just note that this movie is only on Netflix in certain countries. If you don’t have it, you can also watch it on Amazon Prime.

Now, as promised, here is your bonus show… something different!

“Love and Doves” is a classic Soviet romantic comedy from 1984. Some translations call it “Love and Pigeons”.

The story is about a man called Vasiliy who is an amateur pigeon-breeder.  He lives in a rural area with his wife Nadezhda and their kids. He’s pretty obsessed with his pigeons and sometimes spends family money on them, which his wife doesn’t appreciate one bit.

Things get interesting when Vasiliy gets injured and his work gives him a ticket to a resort at the Black Sea. There, he meets a lonely urban woman who is very different from his wife. She fills his head with fantasies of a city life, luring him away from his family.  Of course, Vasiliy has a lesson to learn!

This movie is not only charming and funny, but it gives you a chance to hear the way some older generation rural Russians spoke. Best part? You can simply watch it on YouTube.

With these 8 Russian movies on Netflix, you can enjoy an adventure into Russian culture and language right from your living room.

And if you haven’t done this before, don’t stress – it’s easy. In the Netflix search bar, type in ‘Russian movies’ and everything available should come up. (Some options will be English shows about Russia –  just ignore those.) You can also simply search for a specific movie title.

Of course, there’s not only Netflix – you can browse other movie channels you have access to. One thing you’ll notice is that a couple of Russian actors show up in a few of  these movies. They’re big stars in Russia, so it will be fun getting to know them.

Want To Watch Russian Movies On Netflix, But The Actors Speak Too Fast?

One last thing: if you’re excited to watch these movies, but listening is a struggle for you in Russian, then you're going to love what I've created for you.

It's Short Stories in Russian, my audiobook for intermediate Russian learners.

Listening to fast Russian is difficult. Believe me, I know!  But I've designed this audiobook specifically to bridge the gap between beginner and native level listening material.

You get a collection of eight unconventional and captivating short stories written especially for Russian learners. They’ll help you understand real spoken Russian and transform your listening skills in less than 90 days. Combined with watching a few good Russian movies on Netflix, you’ll be winning in no time at all!