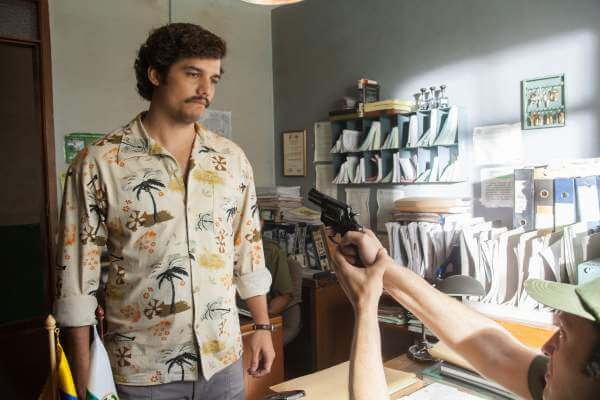 You don't need to learn Spanish!

Don’t worry, that’s not my advice for how to learn Spanish!

That’s how Brazilian actor Wagner Moura was told to prepare for his role as Pablo Escobar in the blockbuster Netflix series Narcos.

But like any good TV series, there was a twist…

You can imagine his surprise when, just 3 months before shooting started, he was told:

So there’s been a change of plan.

Instead of speaking English with a Latino accent, all of your lines are now going to be in Spanish.

You’re Brazilian, so you shouldn’t have a problem, right?

That is exactly what happened to Wagner Moura.

Except, of course, Moura's native language is Portuguese…

And he didn't speak Spanish.

So what did he do?

Simple – he learned how to speak Spanish quickly.

And he did it by following timeless principles of effective language learning.

This is the story of how he did it.

I've dissected Moura's many TV interviews about preparing for his role as Pablo Escobar, and figured out how he managed to learn Spanish fast.

There are eight language learning secrets.

Steal these, and replicate Moura's success to learn Spanish in 3 months yourself!

Let's get into it!

Secret 1: Immerse Yourself In The Culture

Moura went to live in Pablo Escobar’s hometown of Medellin, Colombia to prepare for the role.

He put himself in the shoes of the world’s most famous drug trafficker, in order to see the world from his perspective:

In order to learn Spanish, he took the traditional step of enrolling in classes at a local university.

Hear him talk briefly about his experience with Jimmy Fallon:

But when you look beyond the funny stories he tells for the cameras, you discover he went to much greater lengths to learn Spanish fast:

I went to the Barrio Pablo Escobar, the neighbourhood that he built for the poor, and stayed there and made friends. I went to the stadium of the soccer team he supported. Coz I was just trying to learn Spanish and learn about Pablo. It was pretty intense.

And it's here, when we dig a bit deeper, that we can find the real secret behind learning Spanish quickly.

For Moura, this was not just a bit of fun.

This was the biggest opportunity of his career, and the whole world was going to see the results when he spoke Spanish on screen.

But this pressure was also an opportunity that not everyone creates for themselves when learning a language: He had clear and specific goals to learn Spanish.

With clear language learning goals like these, it's easier to determine what you need to study every day. And it makes it less likely that the inconsistency villain will put your off.

Secret 3: Focus On What You Need To Learn

This is important because Moura goals defined exactly what he needed to do to learn Spanish.

He didn’t have to learn the entire dictionary.

In the same way a tourist needs to order food in a restaurant, Moura had a few common themes he had to master:

I make deals for a living. Now, you can stay calm and accept my deal … or accept the consequences. Silver or lead.

In this scene from Episode 1, you can see the sort of lines he had to learn for the role.

But there's a great lesson here.

You might think that, by learning this kind of Spanish, Moura would have a very limited range of conversation topics in Spanish!

“How can you learn Spanish if you only learn about drug trafficking?”

But if you break this line up, you’ll notice it’s packed with very useful basic vocabulary that can be applied to any topic:

So, by learning real Spanish, Moura also got a solid grounding in the basics of the language.

Not only that, but by being interesting and relevant for him and his character, everything he learned would have been much more memorable and harder to forget. It's without a doubt the best way to learn Spanish fast.

Moura needed to be Escobar on screen, which meant delivering his lines just like Pablo Escobar would have: accent, demeanour, energy, and posture.

In order to study his role model, he watched hours of Escobar speaking, and read books in Spanish about his life.

Like any actor would do, Moura envisioned himself as Pablo Escobar – saw himself in his shoes.

He paid attention to Escobar's unique nuances and attempted to recreate them for himself:

I was able to really understand who this guy was, and to understand what was going on [in Colombia] politically.

But then I forgot all that – I threw it in the garbage in order to create my own Pablo.

When asked about the challenge of acting in a different language he said:

Part of your mind wants your Spanish to be perfect. The other part is there in the drama, in the scene interacting with the other actors. Then a moment arrived when I relaxed, it was really hard at first.

By modelling his Spanish on one specific persona, Moura was able to produce a very convincing result.

Moura didn’t have much of a choice regarding his deadline.

For him, learning Spanish in 3 months was plata o plomo.

With filming to start in 3 months, he didn't have much trouble keeping himself accountable.

But just to make sure, he went one step further and enrolled in a university Spanish class when he arrived in Medellin.

But the weekly deadlines set by his university class would have certainly helped to keep him on track.

With the impending start date for filming, together with regular assignments from the university, he had a powerful combination of deadlines and accountability that would have turbo-charged his progress in learning Spanish.

When learning Spanish, Moura didn't just sit at home and memorise his lines.

He did it all, and involved all four skills in the learning process: Reading, Writing, Listening, Speaking.

Naturally, he would read the script for Narcos itself, but he also read books about Pablo Escobar’s life in Spanish.

There are so many books about Pablo in Spanish, especially in Colombia. Everybody wrote a book about him: the waiter, the guy who fixed his car.

Moura would use his Spanish in text messages and emails. He'd also complete written homework assignments for class.

Writing in your target language helps you process all the new information in your head, and experiment with putting sentences together without the pressure of speaking to someone.

In addition to rehearsing his lines over and over again, he spoke extensively with Medellin locals as part of his research.

Those conversations helped him understand who Pablo Escobar actually was, and what life was like in Medellin.

Moura spent a lot of time listening to the Spanish of his role model, often by watching countless hours of film footage of Pablo Escobar.

Extensive listening is essential to getting used to the sounds, melodies, and rhythms of the language. It ultimately helps you to sound more natural when you come to speak.

Overall, by taking a comprehensive approach to learning involving all four skills – Moura really landed on the best way to learn Spanish, and strengthened his overall fluency as a result.

Secret 7: Speak With Real People From The Start

As we just heard, Moura started having conversations with the locals right from the start.

When he was out and about in Medellin, speaking to locals about Escobar's life, he would have many hours of practice listening to natural conversation, learning how to speak Spanish and interact naturally.

I didn’t know a single word of Spanish!

Although this may seem like an obvious thing to do, many people put off speaking with real people until they “feel ready” – that's the fear villain at work!

By getting stuck in right at the start, Moura had a full three months of practice interacting with real people This undoubtedly helped him get over any fear of speaking Spanish, and quickly start to sound more natural.

Moura worked with a Spanish dialect coach to help reduce his Brazilian accent.

Spanish is kind of similar to Portuguese, actually.

But actually that’s a difficult thing, because sometimes you think that a word is the same. It’s not. It’s something else.

Some have said there are still traces of Portuguese present in Moura's Spanish accent.

However, there's no doubt he does an impressive job – especially after only 3 months.

By working deliberately on your accent from the start, you learn the main sounds you need to focus on to sound natural in the language.

This not only helps you sound more natural, but helps you speak with confidence!

After all that, you might be wondering if learning how to speak Spanish was easy for Wagner Moura?

In his own words:

it was the hardest thing I ever done in my life. And I am extremely proud of what I accomplished.

So, why don't we have a look at what he achieved?

After all, the proof is in the pudding!

Check out this interview of him speaking candidly in Spanish, and see if you're convinced by his performance…

How To Learn Spanish Quickly

Wagner Moura used these 8 secrets to learn Spanish in 3 months.

In return for his efforts, he earned his first Golden Globe nomination for his outstanding performance.

He said of his experience:

This series made me feel like I belong to a culture greater than just the Brazilian one, because we’re quote isolated, culturally speaking.

How many of Moura's secrets are you using in your own language learning?

Now, you may not be able to pick up and jet off to Medellin tomorrow (although you can if you want), but by adopting the strategies Moura used, you can quickly learn how to speak Spanish faster than you thought.

Why not pick one, and integrate it into your language learning routine:

Want to learn a language in 3 months? Now the secret is out!

Do you know any Narcos fans? Have a friend learning Spanish? Let them know by sharing this article on Facebook or Click Here to send a Tweet