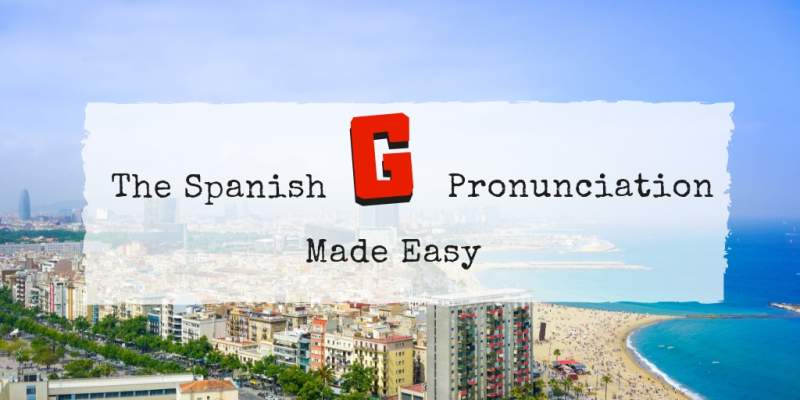 When you learn Spanish, “ge“, or G, should be pretty easy to get your tongue around. But it can still be difficult for native English speakers to master the subtleties of this sound.

The great news about G in Spanish is that the pronunciation rules are straightforward and follow a similar pattern to G in English. So much so that you can master this sound on your own relatively quickly.

As ever in pronunciation, it's the little details that matter, whether you want to sound more like a native or understand native Spanish speakers better.

So, with that in mind, read on and find out how to perfect your Spanish G sound pain free.

You can continue reading this article or watch my video to listen to the examples.

By the way, if you want to learn Spanish through stories, not rules, my top recommendation for language learners is my Uncovered courses, which teach you through StoryLearning®. Click here to find out more and get a free trial.

The Secret To Mastering The Spanish G Fast

To start, here's a tip for perfecting the Spanish G even faster:

Brush up on the Spanish J first. Why?

In Spanish, G shares many similarities with J when it appears in certain letter combinations.

If you can already pronounce the jota (Spanish J) confidently, you're already halfway to mastering the “ge“ (Spanish G).

Start there first if you haven't learned the Spanish J yet. Or just need a refresher on the finer points of pronunciation. That will help you get ready for some of the letter combinations with G in Spanish.

Once you're comfortable with jota, you can move on to pronouncing ge in Spanish.

G has two sounds in Spanish, depending on the letters it appears with in a word.

The first sound is a harder G, similar to a hard G in English, like in the words “goat”, “grasp”, and “get”.

In Spanish, ge makes a hard G sound when it comes before the vowels A, O, and U. Here are some examples:

The hard G sound is also used when G appears in conjunction with some consonants.

This is very similar to what happens in English in words like “grass”, “glee”, and “glove”, all of which have a hard G before a consonant.

In Spanish, G makes the same sound as in English before the consonants R and L.

In general, the hard G is the easiest ge pronunciation for English speakers because it is so similar to the hard G in English.

The Spanish G sounds like the jota when it comes before an E or and I:

Again, this is not too different from in English. The G in “giraffe” and “gentle” has a different sound from the hard G of “great”.

But how do you pronounce the softer Spanish G? That depends on where you are.

In some parts of Latin America, the soft G and jota have a very guttural sound, which comes from the back of the throat.

In Central America and the Caribbean, they have a very soft sound (closer to an English H), almost like you're breathing through the letter when you say it.

I always recommend Spanish learners start by mastering the more guttural ge/jota first because it's a less intuitive sound for native English speakers. That way, it's very easy to soften up your G/J a bit anytime you want to pronounce them with a different accent.

If you want to know more about how Spanish pronunciation, among other things, varies throughout the Spanish-speaking world, check out this post.

What To Do With U Combinations

In Spanish words where G is followed by U, there are multiple pronunciation rules depending on which letter (or letters) come after the U.

1. In words where GU is followed by E I, the G makes the hard sound and the U is effectively silent.

2. If the GU is followed by an A, the letter combination sounds more like “whua” in English.

3. In words with two dots over the u, known as a diéresis, the GU combination makes the sound of G+W

When you see a diéresis over a vowel in any language, it denotes a change in pronunciation.

With those three pronunciation styles, you can pronounce every Spanish G with confidence.

Practice with these words and sentences that combine more than one form of ge:

If you're still struggling with any of these examples, watch the video to hear me saying these sentences (and more!) so you can practice along with me.

Here's a quick summary of everything I've covered in this post to help you remember the Spanish G pronunciation rules:

Why Your Pronunciation Of Spanish G Matters

Why bother with something as seemingly insignificant as the pronunciation of a single letter?

It's often the little differences in pronunciation that make the difference between sounding like a Spanish learner and a native speaker.

Once you move from studying Spanish at home to holding conversations with native speakers, the more you will need to rely on context and an understanding of accents and pronunciation to figure out what is being said.

Every part of communicating with hispanohablantes around the world gets easier as you improve your own pronunciation.

Once you master the Spanish G, you'll be one step further to understanding native speakers…and sounding like a native speaker yourself!