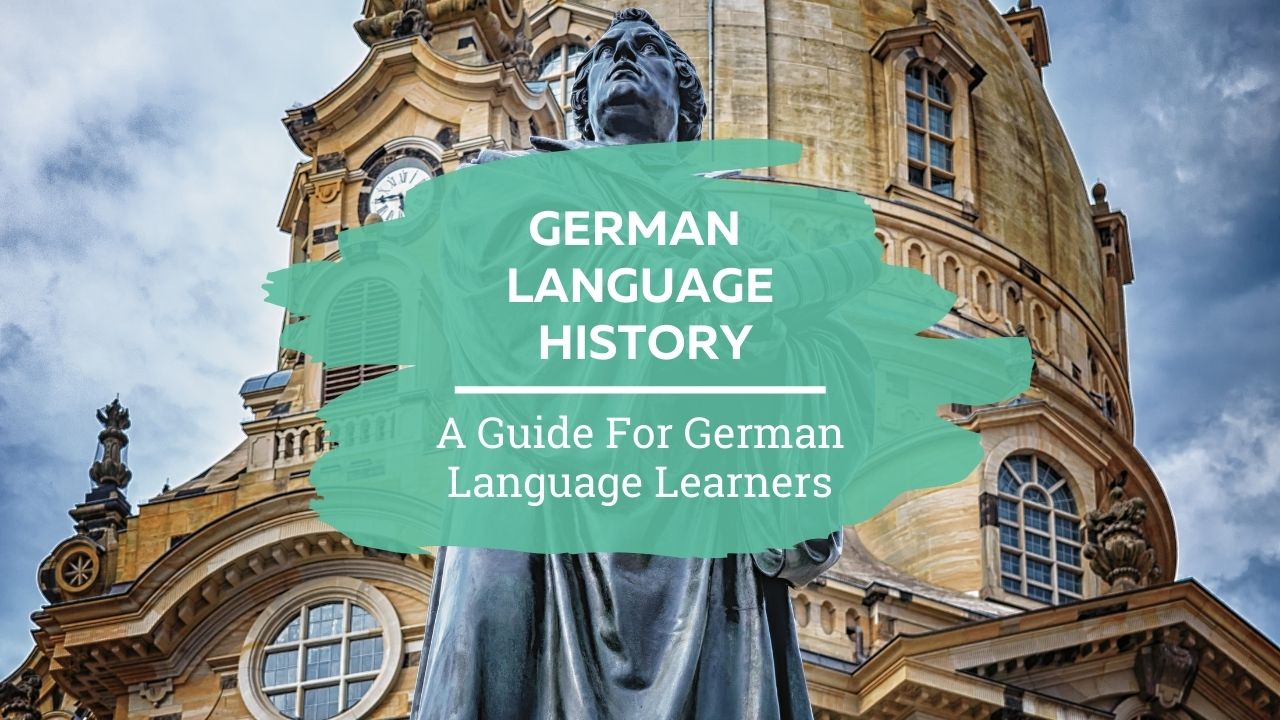 If you're learning German then you'll enjoy learning about the history of the German language. It's a fascinating story of how diversity impacts a language over time.

Some German words came from foreign languages. Others have entered the German language because of encounters with immigrants, business partners, war, technology, or the internet.

For example, in modern German, the English term “brainstorming” pops up frequently. Similarly, as in numerous other languages, most speakers have accepted English vocabulary relating to technology, such as “internet” or “email.”

German is an intriguing language because it has a wide range of dialects that arose from the lack of a cultural centre, such as Paris in France.

This post will help you understand more about the origins of the German language. And how it has evolved throughout the centuries.

Try my fun and engaging language-learning technique for 7 days for free. Click here to claim your free trial.

The German language has seen significant modifications over centuries and has changed with civilization.

Sociopolitical forces have also made the language into what it is now.

Here's a quick timeline of its evolution:

Now, let’s dive into each period in more detail to determine where the German language gets its roots. And how it became the language we know today.

Language scholars think one of the earliest recordings of the German language goes back to the first century BC. That was when the Romans first entered the Rhine-Danube area.

Contemporary German is very different from the language the Romans initially came across.

The coming of the Romans in the year 55 BCE changed the lives of the Germanic tribes and their language forever.

Many Latin notions from trade, conflict, and infrastructure increased the Germanic language to include terms like mura from the Latin murus, which became Mauer in modern German, or wall in English.

But scholars have encountered several challenges in attempting to deduce some pattern of language evolution throughout this historical period.

The scarcity of written records has hampered accurately determining the beginning of the Proto-Germanic era before the seventh century.

Christianity rose to prominence in the fourth century because of Roman influence. It's crucial to remember this since the clergy were primarily responsible for passing on languages.

The historical narrative of the German language began approximately 600 CE, from the age of the Germanic migration and the advent of Christianity.

During the Second Germanic Consonant Shift (or Second Germanic Sound Shift), one set of Western Germanic languages separated from the other Germanic dialects and remained was what we now call Althochdeutsch or Old High German.

The Second Germanic Consonant Shift marks a milestone moment in the history of the German language. That’s why we say Pfeffer (“pepper,” with both the “p” and “f” uttered aloud). And Zelt (“tent,” with the “z” pronounced like the English “ts“).

We can better understand Old High German (OHG) by studying the written manuscripts of various monasteries, such as St. Gall, Reichenau, and Regensburg. Many interesting linguistic artefacts have been discovered in Old Saxon, a dialect of OHG.

For example, Der Heliand (Heiland in German or “saviour” in English) is a poetic text of Christ's life that a monk or pupil composed in the ninth and tenth centuries. The author describes the details of missionary work-life and shows lexical similarities to modern-day German.

Vocabulary, such as so, liebe (love), gode (god), and the letter ä started to resemble the German words we know today.

The Middle Saxon language descends from the present Low Saxon language. From roughly 1100 to 1500, Low Saxon was divided into West Low Saxon and East Low Saxon. Within the dialect spectrum of the West Germanic languages, the neighboring languages were Middle Dutch in the West and Middle High German in the South.

Cultural and economic development, in addition to political polarization, characterized the Middle Ages.

Since 1050, German-speaking regions were split into an assortment of distinct local dialects. And the German language grew in a similarly diverse fashion. Every region had its own language, and each governing dynasty had its own linguistic style.

A different blend of dialects of Middle High German replaced the Latin that had been commonly used in official works at the time. Although a relatively consistent written language evolved in government, there was no standardized spelling in Middle High German.

For example, long vowel sounds such as iß, uß, ui, and diphthongs ie, ou, and üe emerged in MHG. The umlaut also began to spread to all vowels, whereas in OHG, it only impacted the a.

From around 1100 to 1500, the Middle Saxon language was spoken, divided into West Low Saxon and East Low Saxon.

Technical advances, such as Johannes Gutenberg's invention of the printing press in 1446 contributed to the growing importance of a written German language.

Consequently, interregional standards were developed for German that speakers of all dialects could understand.

As the Middle Ages ended, the first attempts were made to develop a “standard German language”. The goal was that the many autonomous areas could speak more readily with one another. Remember that Germany’s political entity did not exist until the nineteenth century.

By the year 1500, there were approximately 80 German publishing houses. Local dialects heavily impacted the first Germanic papers from this period.

Martin Luther's Biblical translation into German from the initial Hebrew in 1522 had a significant impact on the standardization of German. He aimed the Hebrew translation at an “East Middle German” audience.

Following the widespread distribution of the Bible, the basis was laid for a united German language in southern and central New High German dialects in the North.

Language from the Saxon court heavily influenced this style of German, creating the foundation of what we now call German.

Contemporary German's name is “High German,” or Hochdeutsch, the language of administration, higher education, literature, and the media.

During the sixteenth century, four separate Upper German print languages or Druckersprachen arose: Austro-Bavarian, Schwaben, Upper Rheinisch, and Zürich Swiss German. Eventually, attempts were made to eliminate all dialectal statements and enhance the syntax of the printed page.

Despite advances in developing and maintaining a national language or Nationalsprache in the sixteenth and seventeenth centuries, French had a significant effect on the German language as the language of the German courts.

Not unexpectedly, people formed organisations that opposed the influence of foreign languages on German.

Although these organizations had little influence on the views of the upper classes or the language of the courts, they did have some success in affecting the language of literature. Indeed, numerous terms taken from other languages entered the language during this period.

During the 18th century, several excellent writers shaped contemporary standard German into what it is today. Now, German is the language of the church, state, educational institutions, and literature.

Grammatical and phonetic norms originally appeared in the Duden Handbook in 1880. This became the official definition of the German language in 1901.

In 2017, the German alphabet's youngest letter was born, the capital Eszett, or “long s”. This letter previously didn't exist since you only use it at the end of a syllable.

Now, when a phrase or proper name, including the small ß, is written in all-caps, a capital ß is used.

Like other languages, German is constantly evolving. New vocabulary and sometimes grammar rules will continue to change the German language in small and incremental steps in significant ways.

If you want to learn how German culture impacts the language, instant immersion is an excellent approach. My StoryLearning® method keeps you engaged in a narrative as you learn German through stories.