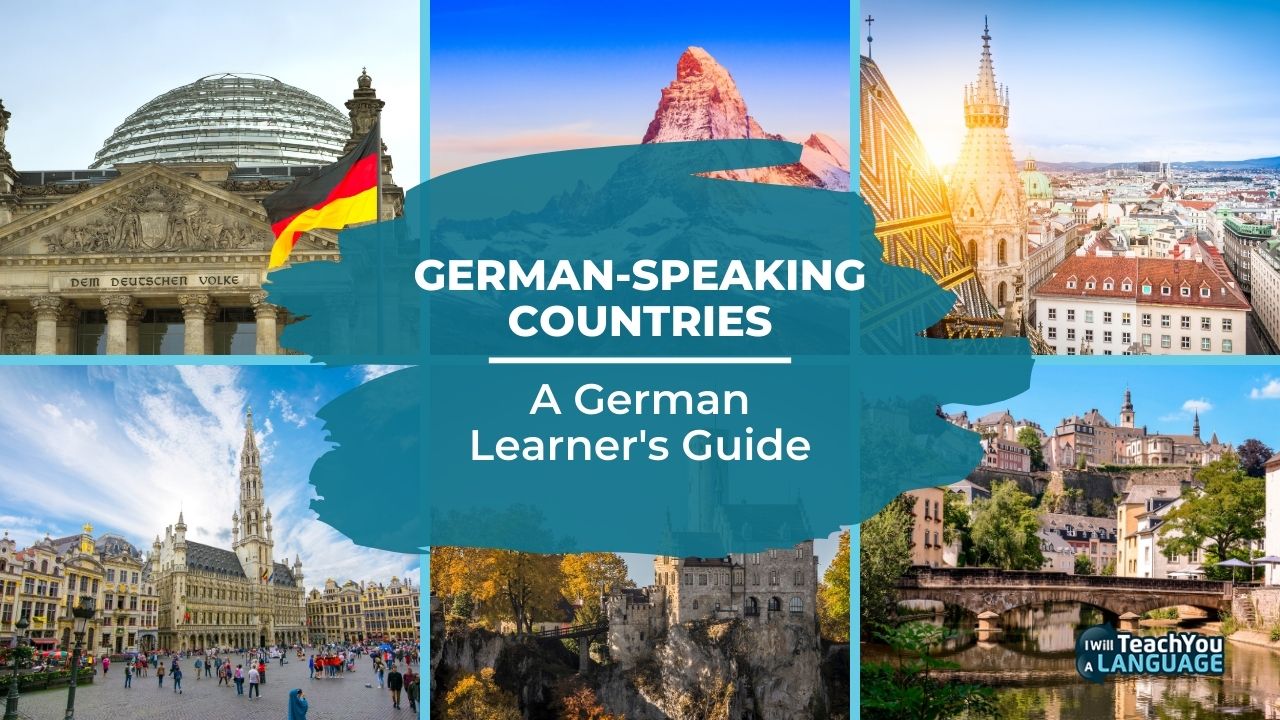 Good news if you're learning German – at least 42 countries globally have German-speaking inhabitants. Almost 100 million people speak German as their mother tongue. And another 80 million consider it a second language.

You might not know that most German speakers reside outside of Germany.  And many outside of Europe. Back in the 1600s, German almost became the official language in the United States.

This post will look at all the German-speaking countries around the world as the official, co-official, minority, or common language. I'll also introduce some of the different dialects and where they're spoken.

German-Speaking Countries Where German Is The Official Language

Approximately 78% of all native German speakers are in Germany, where German is the official national language.

These countries make up the area of Europe known as the German “Sprachraum.” In this region, German is the official language and spoken by the vast majority of inhabitants.

Next, I'll dive deeper into the history of the German language in each country and how the dialects differ.

When you start to learn German, you'll probably hear Hochdeutsch (High German), or standard German, first. In the Northern regions of Germany, Hochdeutsch is spoken most frequently and is easiest to understand. Pronunciation is straightforward, and words are clearly articulated.

Unfortunately, the German language doesn't sound the same everywhere you go. And some dialects can seem like an entirely different language altogether. In total, there are over 250 German dialects. Although only 30 are in use today.

You're probably wondering how the language developed so many variations. Early Germanic tribes living in regions throughout Germany each had a different cultural heritage. These nuances resulted in the evolution of various dialects within specific population groups.

German dialects can be broken down into High German and Low German, or Plattdeutsch. High German, or Hochdeutsch, is the official form of German, taught in textbooks, used in the media, at educational institutions, and other times formal communication is required.

Most German dialects originate from High or Low German or combine both. Other variations include the Alemannic, Bavarian, and Frisian dialects.

Austrian Standard German is a variation of Hochdeutsch that Austrians typically use in formal communication. In Austria, you'll encounter dialects in the Austro-Bavarian, Viennese, Central Austro-Bavarian, Southern Austro-Bavarian, and Vorarlbergerisch, in addition to numerous local accents.

One of the most intriguing aspects of Austrian German is that many words differ from their German counterparts.

Most vocabulary differences relate to food, although other words such as months, administrative terms, and furniture also have different names in Austrian.

Speakers of standard German can typically understand Austrians without too much difficulty, depending on the dialect. Some Austrian dialects contain nuances from non-Germanic languages, like Italian, which makes them more challenging.

Swiss German is one of the most confusing dialects, even for native German speakers. In Switzerland, people use a unique pronunciation system and grammar that doesn't follow any official rules. The primary reason Swiss German sounds so different is that it uses words inherited from the French language or Helvetisms.

Switzerland's proximity to France resulted in the development of many different Alemannic dialects. A written form of Swiss Standard German exists for official communication. But the spoken language uses hundreds of linguistic variations.

Over the centuries, Hochdeutsch and Schweizerdeutsch took separate paths when it came to modernizing their grammar and vocabulary usage. To compare, consider the differences between Standard English and Welsh, for example.

Today, Switzerland has four official languages that include High German, Italian, French, and Romansh. Although German speakers may not understand the Swiss, the Swiss are well-educated in Hochdeutsch, so most of them will comprehend your Standard German.

German is an official language in Belgium, in addition to French and Dutch. Only 1% of the population speaks German as a native language, although more people speak German as a second language.

Most of the country's German-speaking community lives in East Cantons, which has 73,000 native speakers. In this region, you can hear a Ripuarian dialect, which has nearly one million speakers worldwide. This dialect is widespread in German cities like Cologne, Bonn, Düsseldorf, and other Rhineland regions.

The German-speaking community of Belgium, Deutschsprachige Gemeinschaft Belgiens, has its own government and Prime Minister. During the 1970s, several minority groups within Belgium were granted autonomy. And soon after, the Germans established their legislative parliament or Rat der Deutschsprachigen Gemeinschaft.

German In Luxembourg And Liechtenstein

German, French, and Luxembourgish are the three official languages of Luxembourg, and nearly 100% of the population is trilingual. Only 2% of inhabitants speak German as a native language, while almost 70% speak German as a second language. Consequently, you're most likely to encounter Standard German in both spoken and written forms.

In Liechtenstein, the only official language is German. Local dialects stem from Middle and High Alemannic origin, while others sound similar to Swiss German. The country's neighbors, Austria and Switzerland, have influenced the development of the language. Nonetheless, Hochdeutsch remains the norm.

Countries Where German Is A Co-official Language

German is also a co-official language within regions of three other countries.

These countries use German for administrative and official documentation purposes.

Countries Where German Is A Minority Language

Germans have immigrated all over the world. As a result, you'll find many communities, municipalities, and cities where German is a minority language.

Although the countries above don't recognize German as an official language on an administrative level, it is considered a minority language. In most of these regions, the German language's cultural and historical significance has contributed to its recognized legal status.

Countries Where German Is Widely Spoken

In many other demographics, German has become a commonly-spoken language but isn't acknowledged as a co-official or minority language.

Many of these German speakers are immigrants or the ancestors of earlier settlers.

In addition to a worldwide presence, German is also the official language of many well-known international organizations.

Because German is the most popular and most widely-spoken language in Western and Central Europe, it's essential for many official purposes.

Many Germans emigrated during World War II and continued to have a strong foreign presence since. Today, German citizens enjoy more free time off than most other developed economies. Some of these benefits include a standard 30 days of paid vacation time, national holidays, paid sick leave, and the ability to trade overtime hours for vacation days.

Germans also have higher incomes on average than other nations. When combined with the long winter months, and widespread vacation culture, travel to faraway places becomes irresistible. During retirement, many Germans decide to move abroad in order to find a warmer climate and a lower cost-of-living.

The German language has made its mark on dozens of counties across the globe. German-speaking countries, communities, regions, and cities have embraced German as a part of their cultural heritage, making it one of the world's most popular languages.

Join the other 14.5 million people who are learning German right now. That's why you'll find more than enough opportunities to practice no matter where you travel abroad.

Get started now with a FREE 7-day trial of German Uncovered.