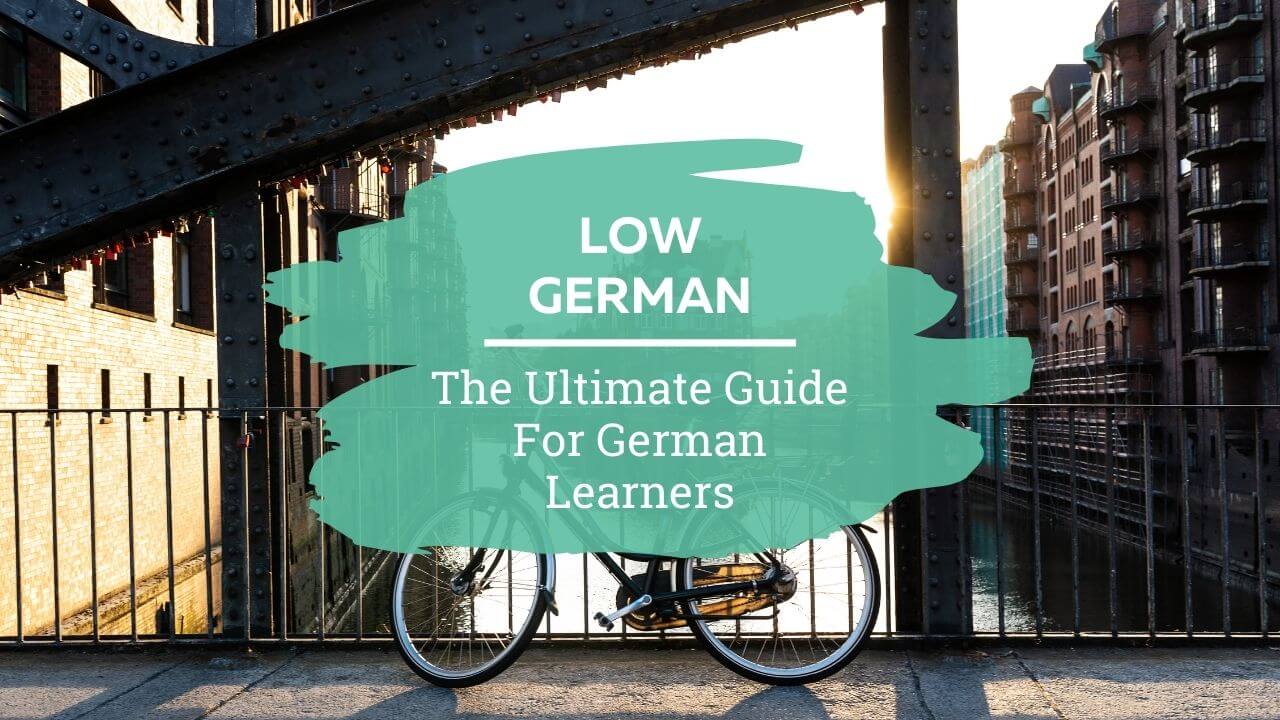 If you're learning German then maybe you've seen a map of German dialects. If you have you'll know that the spoken language is just as diverse as the written one, with several dialects spoken throughout the country.

Like many languages, German has its own dialect continuum with a progression of dialects that change as you move through a geographically defined area.

One of Germany’s most prominent dialect groups is Low German, or Plattdeutsch, spoken throughout northern Germany. The differences between Low German and High German are interesting because they are so similar while being quite different at the same time.

In this post, you’ll learn how Plattdeutsch differs from High German and other dialects. Some of the differences are noticeable in vowel and consonant pronunciation, and grammar usage. You’ll also learn a few phrases unique to Low German-speaking regions.

What Is Low German?

Plattdeutsch is a dialect of the German language spoken in Northern Germany and the northeastern part of The Netherlands.

The name comes from the fact that the language’s speakers are located at a lower elevation than High German speakers geographically. The dialect is closely related to English and Dutch.

On the other hand, High German is spoken in southern Germany and Austria and has roots in Old High German. As a result of this geographical divide, there are several differences between Low and High dialects.

The High version of the language developed in mountainous areas and was used by scholars and government officials, while the people spoke low German on the plains. Another name for this dialect is Plattdeutsch, which means flat or plain German.

Today, this dialect is disappearing from public use. Only around 3% of the population in Germany continue speaking Plattdeutsch.

Many Dutch people can understand Plattdeutsch even though they don't speak it, which isn't surprising since both languages come from the same dialects spoken in the Middle Ages.

But there are also Plattdeutsch speakers outside of Germany. For example, Mennonites in the US and areas in Russia have immigrants with descendants of Low German-speaking populations.

In Schleswig-Holstein, 24.5% of the population speaks excellent Plattdeutsch. Mecklenburg-Vorpommern has the second-highest percentage of Plattdeutsch-speakers with 20.7%. In Bremen and Niedersachsen, around 17% speak Low German. Finally, Nordrhein-Westfalen has 11.8% and Hamburg 8.5% fluent in the dialect.

The Dividing Line Between German Dialects

The famous dividing line for German dialects is called the “ik-ich Linie,” and a second line, almost parallel to it, is the “maken–machen Linie.”

Plattdeutsch has short and long vowels like the standard dialect, with a few variations. Before M, N, NG, L, and R, short vowels are somewhat extended but otherwise unchanged and usually written as double vowels like the Dutch-based system.

Except for a long “i,” long vowels and diphthongs are spelled with single letters in open syllables. These long vowels are often spelled as double letters when followed by more than one consonant letter in closed syllable. A long “i” is always spelled “ie,” and a long vowel is followed by an “h” in the German cognate.

You can see how Plattdeutsch pronunciation resembles a mixture of the standard variety and English from the example words below.

The final devoicing of obstruents is one trait that distinguishes Plattdeutsch from English. For example, when ‘t’ comes at the end of a syllable, you pronounce it like a ‘d.’

An obstruent is a phonetic term that describes a consonant sound you create by blocking the airway for turbulence. This occurrence happens in Dutch and the standard variety of German as well.

You can observe three common consonant changes that include:

Although the pronunciations in Westphalian, Hamburg, and Mecklenburg Plattdeutsch differ, they have one thing in common compared to Hochdeutsch.

The preservation of a specific consonant shift is common across regions, as you can hear in other West Germanic languages ​​such as English or Dutch.

Unlike Dutch, Hochdeutsch, and southern Low German, northern dialects, including Scandinavian languages, Frisian, and English, create the past participle without the prefix ge-.

For example, compare slapen (northern Low German) and geschlafen (German past participle for sleep). Other examples include the auxiliary verbs hewwen/hebben (to have) and wesen/sin/sien (to be) with the past participle.

In contrast to the standard dialect, Plattdeutsch has a present progressive form of verbs corresponding to the Dutch language. This form uses the words wesen (to be), a (at), and dat (the/it).

The adjective forms in Plattdeutsch differ from those in other closely related languages such as German and English. Instead, these forms resemble a combination of both languages.

Adjectives in this dialect, like those in the standard one, distinguish between singular and plural forms according to the nouns they modify, the three genders, and the indefinite (weak) and definite (strong) forms.

Although this dialect doesn’t have official spelling rules, several schools have devised systems for teaching Plattdeutsch. If you want to impress your Plattdeutsch-speaking friends, the following words and phrases can help you sound like a local.

While you can always speak another dialect, some phrases and words are unique to Plattdeutsch. They add a nice flavour to your everyday conversations and are a fun way to boost your vocabulary.

The Future Of Low German Dialects

With the widespread use of Hochdeutsch in the mass media and schools, the expansion of other dialects steadily decreased. Low German is particularly affected because, of all the dialects, it differs most from the standard.

Sound shifts that differentiated German in the Middle Ages from other Germanic languages ​​such as Dutch and English spread mainly in the south and barely made it north. Other dialects, such as Bavarian, have resisted the influence of Hochdeutsch culture more successfully and still have 13 million speakers.

To keep the Platt alive, the government of Mecklenburg-Western Pomerania introduced classes in the dialect at six schools in March 2017. In addition to state-funded educational initiatives, local artists are also trying to bring the forgotten language back onto the stage.

Many Germans consider Plattdeutsch a cultural treasure that must be actively preserved. More and more kindergartens and elementary schools in northern Germany identify themselves as Low German institutions where children can learn the regional dialects of their ancestors.

Speakers of Plattdeutsch are still inventing words and phrases to keep the dialect alive. Many musicians, performing artists, and theatre groups use Plattdeutsch to inspire audiences to learn more Low German expressions.

Learning a German dialect can be helpful in many situations, even if you're not traveling to Germany.

For example, if you’re learning German as a second language and need to practice conversing with native speakers, you might find it useful to study a dialect. It's helpful to know the language thoroughly enough to be comfortable using it when speaking to native speakers.

Germans will appreciate your efforts, and you'll feel like a pro! Plattdeutsch words make for great conversation starters and help you discover parts of your family or friends' history.

In the meantime, if you want to learn any variety of German, then the most natural and effective way is through story. Follow the 10 rules of StoryLearning® and read German books to immerse yourself in the language thanks to page-turning tales.