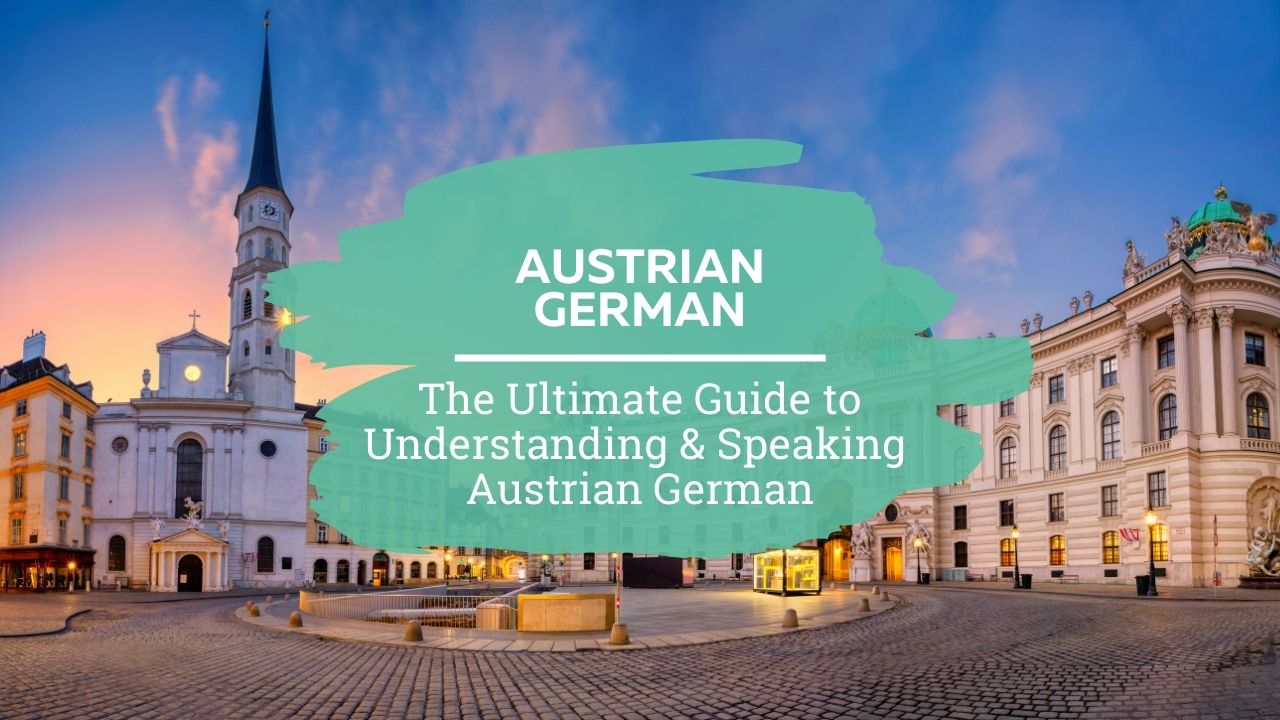 The Ultimate Guide To Austrian German

If you're learning German, then you might be curious about the different varieties of the language, such as Austrian German or Österreichisches Deutsch.

This is a dialect of Standard German influenced by Southern German and Bavarian dialects. Over 98% of the population of Austria speaks German, which is the nation's official language.

Although this variety is simpler to understand than, for example, Swiss-German, there are still many differences.You'll discover them in this post. And learn words and phrases to speak like a native!

Get ready to understand the German of Austria and impress your friends, whether in Vienna or Salzburg or beyond.

What Is Austrian German?

First things first – what is the Austrian variety exactly?

Small changes in vocabulary, grammar, and phrases differentiate Austrian German from Standard German. And the pronunciation doesn't change too much.

So you might be wondering – is the language really different in Austria?

Is German Different In Austria?

Austrian German is almost the same as Standard German. But, spoken Austrian German has lots of different dialects, some of which are easier to understand than others. Many of the differences involve vocabulary and expressions.

German (and English!) are what you call pluricentric languages, which means they have multiple official variations. If you compare British English to American English, you can imagine how Standard German and Austrian German differ.

But how did this variety emerge? Let's take a brief look next at its history.

A Short History Of Austrian German

The standardisation of Austrian German goes back to the 18th century. When mandatory school attendance was introduced in 1774, the government created administrative language standards.

Over the years, written German in Austria was influenced by Bavarian and Alemannic dialects. These variations to the language give the dialect its unique characteristics.

Let's take a quick look in the next section at some of these accents and dialects.

Depending on the region, you can comes across many different accents and local dialects.

Austro-Bavarian dialects like the ones below are some of the most common forms of German you'll hear:

Upper German dialects are also relatively common in everyday spoken language. In addition to these dialects, you can also find regional accents that are less intelligible.

Some dialects even have words from Romance languages.

Speaking of words, let's get into some of the differences in Austria via the vocab in the next part.

Vocabulary is a great place to start when learning Austrian German.

When speaking with Austrians, there are several key vocabulary differences compared to Standard German, although you may encounter both.

Make a great first impression by learning the everyday words below.

If you'd like to learn more Austrian vocabulary, check out the Austrian German Dictionary.

So, now you've mastered some of the vocab differences, let's move onto the grammar.

The good news is that Austrian German grammar is pretty much the same as standard German grammar. So you won't come across anything too different!

The first main difference is that in Austria, the verb “to be” has different conjugation patterns than in Standard German.

The Austrian version either uses a shortened form of the Standard German verb or a new structure altogether.

It's also common in Austrian German to drop the final “e,” if not other vowels, in the plural form.

Typically, you use the Perfect tense to form the past in spoken German.

Austrian German is the same. But they often use a different auxiliary verb for individual expressions.

By the way, Austrians rarely use the simple past tense.

Pronunciation in Austrian German is similar to Standard German pronunciation. But some differences stand out.

Example: In Austrian German, you would say Aufnahmsprüfung instead of Aufnahmeprüfung (entrance exam).

You might know that Germans tend to be direct when speaking to others. Austrians, on the other hand, make their sentences more polite.

Let's look at how a German would say, “I didn't get around to it yet,” compared to how an Austrian would say the same.

Moreso than Germans, Austrians value giving explanations in situations like these.

So, you're probably ready for some Austrian idioms and slang by now.

Austrians have dozens of expressions unique to their country. To blend in with native speakers, you'll need the phrases below.

When translated, this expression means, “only a goulash tastes good reheated.” Austrians use this saying to remind friends that rekindling a relationship with an ex might not be the best idea. You can also use it when someone brings up a topic that was already thoroughly discussed.

This phrase has two different meanings. The literal meaning is “Are you stupid?” Saying this to a German would likely offend them. However, Austrians also use the phrase as an expression of amazement to mean, “wow.”

This expression means that there is (not) enough of some resource (often time) in order to do something. Das geht sich nicht aus could mean” something like “I/we/they don't have enough… time/money/space/… to do it”.

If you like or enjoy something or someone in Austria and Bavaria, you can express your interest by saying, Das taugt mir.

If you “Get the ass card,” you're having bad luck that day.

Translated, the phrase says, “Doesn't help, doesn't hurt.” Use this saying if your Austrian friends are hesitant to try something new.

This means something is fantastic.

Semmas is a way to ask your Austrian friend if they're ready to go. Gemma, or Gehen wir? is a way to say, let's go.

How To Learn Austrian German

Now you've seen the differences between standard and Austrian German, how can you learn it?

Well, immersion is one of the best ways to learn. And you'll also learn faster by speaking with native Austrians too.

But even if going to Austria isn't an option, you can still learn with the dialect from home. Austrian apps, movies, and TV shows can help you pick up everyday expressions.

So in the next section, let's take a look at some of these immersion tools.

There are lots of Austrian movies to choose from, many of which are available for free on popular streaming sites.

The Sound Of Music

Known as “die Trapp Familie” in German, this Austrian film could be a perfect place to start since you're probably already familiar with the plot.

Immerse yourself in an Austrian fantasy with this tale of a pianist in Vienna.

If you're interested in a more recent Austrian cinema example, the Paradise film trilogy is an attention-grabbing movie to start with.

You can also learn Austrian dialects by watching TV shows.

The actors in this family show speak with a Viennese dialect, or “Wienerish.”

This crime series is a spin-off of “Kaisermühlen Blues”.

This Austrian comedy will help you become more familiar with the country's sense of humour.

Finally let's take a look at some German learning apps, specific to the Austrian variety. These apps are available for your Android or iOS to help you learn Austrian German dialects and accents.

This app has over 150 Austrian radio stations where you can listen to music, podcasts, and shows.

Read articles from popular magazines and newspapers in Austria. You can also visit links to the websites of each.

Another option is to learn Austrian German by connecting with native speakers online through an app like Tandem.

Final Thoughts On The German Of Austria

So there you have it – everything you need to know about the German of Austria, from vocab to pronunciation via movies and more.

As German is a pluricentric language, that makes it that much more fun to learn all the different dialects.

In addition, by learning regional dialects, you'll get more exposure to authentic spoken German. And Austrian German offers the perfect opportunity to test the waters since it's one of the easier accents to understand.