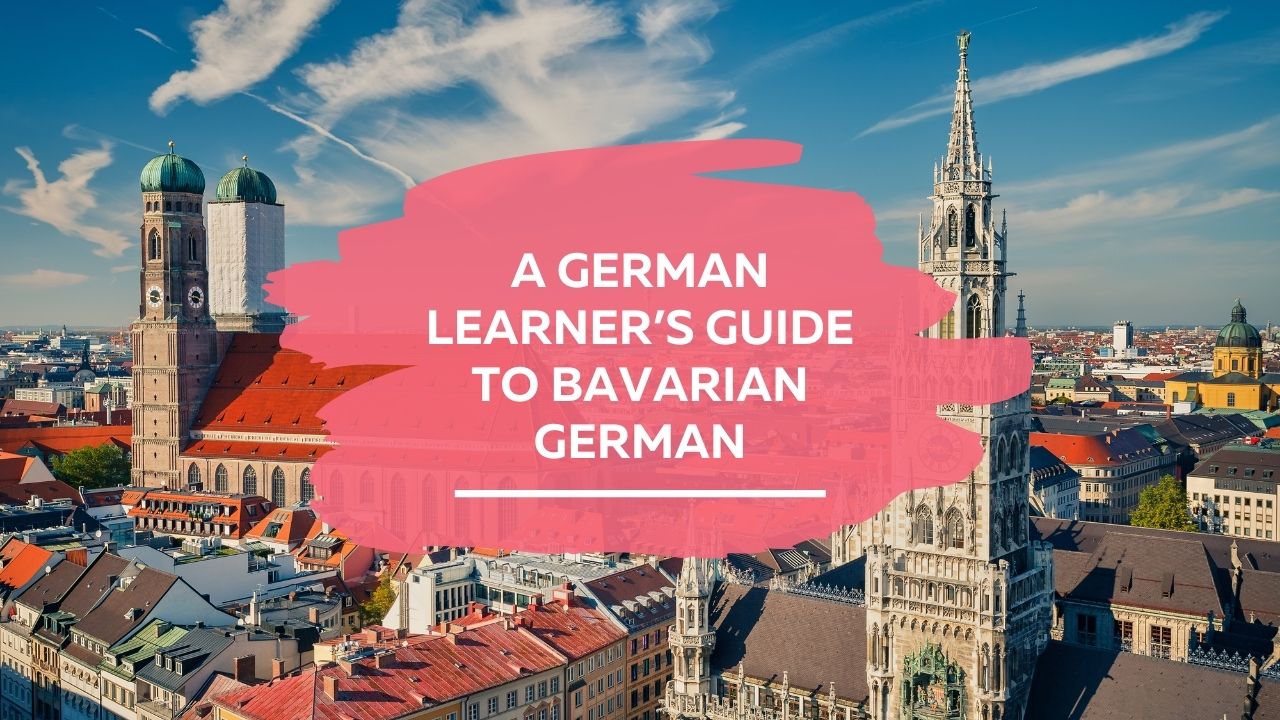 When it comes to learning German, you should know that Bavarian German is a dialect distinct from standard German – one that comes from the region in which Bavaria and Austria meet.

Just like the English language varies across America, Great Britain, and Australia, Bavarians also have a regional dialect of their own.

But compared to standard German, Bavarian German sounds like an entirely different language. Even native German speakers have difficulty understanding the dialect.

If you plan to stay in Bavaria for a while or travel throughout the region, you should probably familiarize yourself with the Bavarian German dialect.

Learning a few words and phrases will make your stay much more enjoyable and come in handy when dealing with locals. And that's exactly what you'll learn in this post.

What Are The Differences Between Standard German And Bavarian German?

Standard German and Bavarian might sound like two different languages, but they are different German dialects. Which one you speak depends on whether you live in Bavaria's north, central, or south. You’ll come across three variations of the Bavarian dialect.

Bavarian or Bairisch is primarily spoken rather than written. Most individuals would write in Hochdeutsch even if they spoke Bavarian in everyday life.

Bavarian German doesn't have a written form which may be due to the lack of Bavarian dialect education in schools. Also, many Bavarian terms are spelled phonetically rather than using official spelling.

Even in a large city like München, many people speak Bavarian rather than Hochdeutsch. When natives realize you're a tourist or having trouble understanding, they generally switch to Hochdeutsch.

One of the most practical purposes for learning Bavarian is that you will be more likely to fit in with the locals. They are some of the friendliest people in all of Germany, so they will likely return the favor if you are open and friendly.

These Bavarian phrases can lead you into enjoyable conversations that allow you to learn more about Bavaria and its people.

Bavarian German also enables you to get in touch with your roots if you have German descendants, understand another part of Germany’s rich history, or even communicate with German-speaking friends.

Why Are Bavarian And Standard German Different?

Bavarian people have a strong feeling of belonging. Even though it may appear absurd to outsiders, many people identify as Bavarians rather than Germans.

In political and other arguments, this sense of unity is frequently extended to the entire state of Bavaria, but it is also frequently stated at a regional level.

Compared to other parts of Bavaria, Franconians place a premium on whether they are from Lower Franconia, Middle Franconia, or Upper Franconia.

This sense of belonging can be down to the tiniest detail. For example, in Lower Franconia, neighbouring villages compete for the Maypole. This long-standing, now friendly competition leads to attempts to distinguish oneself through idioms even within neighbouring villages.

Environmental elements frequently produce natural linguistic boundaries. For example, rivers or mountains can create language region borders. The river Lech is one of these linguistic divides. West of the Lech, residents speak Swabian, and to the east of the Lech, Bavarian.

Luckily, one anxiety can be alleviated in the process. The various linguistic groups generally understand each other.

For example, people will still understand you even if you sound comical like a Franconian in Upper Bavaria. In Bavaria alone, you can encounter over 60 regional dialects.

What To Know As A German Learner

Although you can get by speaking Hochdeutsch, you might still want to learn a few Bairisch words and phrases to improve your listening comprehension. First, you should become familiar with the Bavarian alphabet.

As you can see, the Bavarian alphabet includes additional vowel sounds that you don’t hear in standard German.

These extra vowels give the Bavarian dialect the signature sound that differentiates it from standard German pronunciation. Next, let’s look at a few words and phrases you’d hear in Bavaria.

How To Pronounce Bavarian Vowels

The Bavarian “a” has numerous pronunciation possibilities compared to standard German. This vowel can be a long, drawn-out “a” that sounds more like an “o” or a short, bright “a.”

The “o” is pronounced more like a light “a” but also has many tonal variations like the “a.”

Check out these 16 words and expressions that will have you speaking and understanding Bavarian German in no time.

You have many different choices for greetings in Bayern besides Hallo or Guten Tag.

In Bavaria, Grias god means Grüß Gott and is the most common greeting. Seavus or Servus can mean either hello or goodbye.

Never use the word Tschüss in Bavaria. Although people understand this word for goodbye, it seems too foreign for true Bavarians.

You can use another word, pfiate, to say goodbye to people you're on a first-name basis with. But it’s essential to pay attention to your tone. Otherwise, you could come across as sounding derogatory. A second meaning for pfiate is “to get lost”.

You can give a different Bairisch greeting at various times of the day.

In a formal setting, you can ask someone how they are with the phrase:

You can use a similar variation in an informal setting.

Travellers who find themselves at the infamous Oktoberfest in Bavaria need an appropriate phrase to order a drink.

#5 Where Is The Restroom?

After a few beers, you may need to ask for the restroom.

Once you arrive at the glo, you might be confused by the signs that read:

Assume that someone wants your perspective on something, or you don't want to participate. If you don't know what someone is talking about, try the simple answer below.

#8 Would You Dance With Me?

You can ask someone to dance with you to your favourite Bavarian music by saying the following.

Use this phrase if you want to say you’re sorry for something in Bavarian.

When your Bavarian friend feels unwell or had a few too many drinks the night before, you might want to wish them a get well soon in their native tongue.

If someone gets on your nerves for too long, you can tell them to get lost with this phrase.

A Bavarian way to say thank you is:

When it’s time to say farewell, you can wish your friends goodbye with the phrase below.

Let your loved ones know that you miss them in Bavarian by saying:

The next time your Bavarian friends celebrate a birthday, you can congratulate them with this phrase.

#16 One Language Is Never Enough

What better way to express your fondness for learning languages than with the Bavarian phrase?

Although Bavarians are proud of their unique dialect, they also want to be understood by all other German speakers.

As such, many try to talk more clearly when around non-Bavarians. Bavarians also appreciate any attempt made by foreigners to try pronouncing the words correctly or making sense of the dialect.

You now have a basic understanding of the Bavarian dialect and a notion of how it sounds. And if you want to pick it up, immerse yourself in Bavarian German – listen to podcasts by Bavarian speakers, or German TV shows set in that region.

Pfiat eich! Until next time!

(That's a Bavarian way of saying ‘goodbye to you all.')