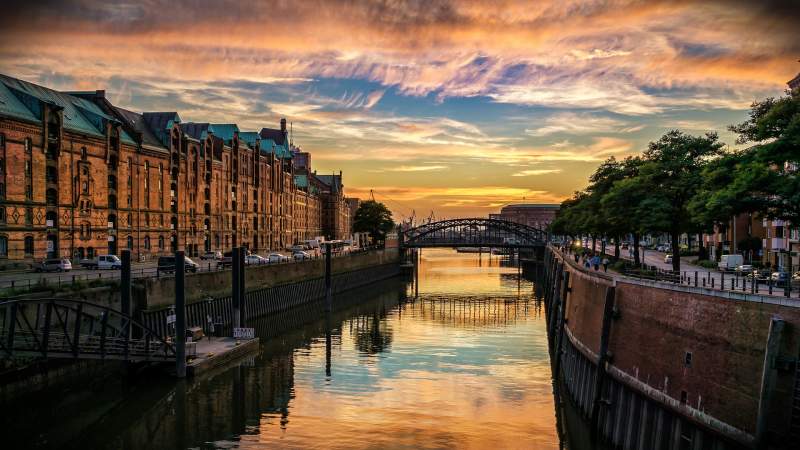 Verb position in German, along with many other aspects of learning German, can seem confusing right?

It's as if German sentences were encoded using some sort of Shakespearian language. I mean, where on earth do you actually put these verbs to make your sentence!?

The good news for you is that German sentence structure follows a clear set of rules. And verb position is one of the more straightforward concepts in German grammar.

I've always said that one of the big advantages of learning German is it's logic (a lot of which it also shares with English).

In this article, you'll see the logic of the language in action when it comes to where to verb position in German.

You'll learn exactly where to put German verbs in different situations, including the “dreaded” verb at the end. Don't worry, it's not so scary after all.

With German Uncovered you’ll use my unique StoryLearning® method to learn German verb position and other tricky grammar naturally through stories. It’s as fun as it is effective.

In the meantime, back to the subject at hand…

With a few exceptions, the verb comes second in German sentences.

Let's look at a few examples where the verb comes second. I've labelled each element of the sentence so you can tell the verbs from the other parts of the sentence.

2. How To Ask Questions In German

So far, German sentences appear to share an almost identical structure to English sentences. So far, so good right?

However, a few extra rules come into play as we start to change certain elements.

For example, when asking a question, the verb comes first.

Two Verbs In A Sentence

When you have two verbs in a German sentence, you place the conjugated verb in the second position and the unconjugated verb at the end of the sentence.

Let's look at the following example. 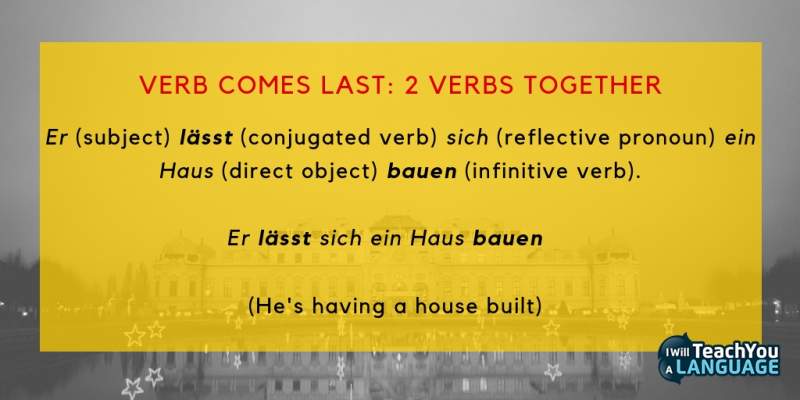 Some verbs in German have a prefix attached to them. In this case, it's usually a preposition.

A prefix is a short word attached to the beginning of a word. For example, in English, “un” is a prefix you add to certain words to change their meaning: “happy” => “unhappy”.

When a verb has a separable prefix, the prefix is moved to the end of the sentence. Here's what happens with the verbs einkaufen (to shop) and anfangen ( to begin/to start), which are both examples of verbs with separable prefixes.

Conjunctions are little words that you use to join two parts of a sentence together. “And”, “because” and “so” are all examples of conjunctions in English.

The German conjunctions that don't affect the word order are:

Subordinating German conjunctions, on the other hand, are a different story.

Following subordinating conjunctions, the first verb is moved to the end of the sentence.

Some of the most commonly-used subordinating conjunctions are:

Here are some examples in context so you can see what these conjunctions do to the verbs:

The more adjectives, adverbs, and sentence modifiers you add, the longer it can take to finally get to the verb at the end.

As Mark Twain once said:

“But when he, upon the street, the (in-satin-and-silk-covered-now-very-unconstrained-after-the-newest-fashioned-dressed) government counselor’s wife met.”

On a positive note, at least there are no rule exceptions to worry about here.

5. And Finally: The Verb Comes Last

Although the primary rule is to place the verb second in German, there are many circumstances when the verb comes last.

For example, you've already seen how subordinating conjunctions can send verbs all the way to the end of a very long sentence.

However, there are a few other instances when the verb comes last. Let's take a look at 2 examples: how modal verbs and relative clauses affect verb order.

The modal verbs are “helping verbs”, meaning that you can only use them to modify another verb, but not on their own.

When using a modal verb in a sentence, the second verb changes to the infinitive form and moves to the end of the sentence.

Changing the verb to the infinitive form and moving it to the end of the sentence might feel weird at first. But will become much easier with practice and exposure to German.

Let's look at the following examples:

As you can see, the modal verb is always conjugated, while the second verb takes the infinitive form.

Relative clauses, or Nebensätze, also send verbs packing to the end of the sentence.

If you're dealing with multiple verbs in a sentence, the first verb will be sent to the end of the sentence.

Let's look at a few examples.

Relative clauses come directly after the word they are modifying. The rest of the sentence maintains the standard subject, verb, object word order.

German word order is not set in stone. In fact, it's common to see inverted sentence structures in the German language. Let's look at a few different ways to write the same sentence.

The adverb is free to move around within a sentence. You can also move the object of the sentence.

Regardless of the placement of the adverbs and objects, the verbs stay in the second and last positions.

The purpose of inverting a sentence in German is to emphasise a particular aspect of the situation. Since German word order is flexible, it's possible to accentuate any part of the sentence you choose.

German verbs are always either in the second or last position in a sentence. You've seen how changing word order lets you emphasise different elements of a sentence.

You've also learned when to move verbs to the end of a sentence to make space for prepositional phrases and temporal adverbs.

But there's one more important aspect to remember about German sentences.

When faced with various adverbs that need placement within a sentence, we always follow the rule time, manner, place.

Take a look at these examples:

In most circumstances, German sentences follow the structure subject, verb, object.  Just like in English. In the image below, you'll see a quick summary of the verb positions and what causes the changes.

German allows for flexibility, so feel free to change up your sentence structure to emphasise particular words. Just remember, the verb must stay in its second, or last, position. And adverbs need to follow the format time, manner, and place.

When you follow this logic, you'll be making German sounding sentences in no time with all the verbs in the right places. With the right strategy, you can learn tricky grammar points, and boost your fluency as a result.

As you read or listen to German, try to notice the verb placement, and relate it to what you've learned in this post. The more input you get, the more these rules will feel natural and intuitive to you.

By the way, if you'd like an easy way to get the input you need to straighten out German grammar, like verb position, in your head, then you'll love German Grammar Hero.

It's my new course for low intermediate to intermediate German learners who are tired of translating in their head when they try to speak.

It's a story-based course that helps you internalise the logic and rules of German, without getting bogged down in grammar rules and memorisation. You can check it out here.

Otherwise, let me know in the comments – do you feel more confident about verb position in German after reading this post?