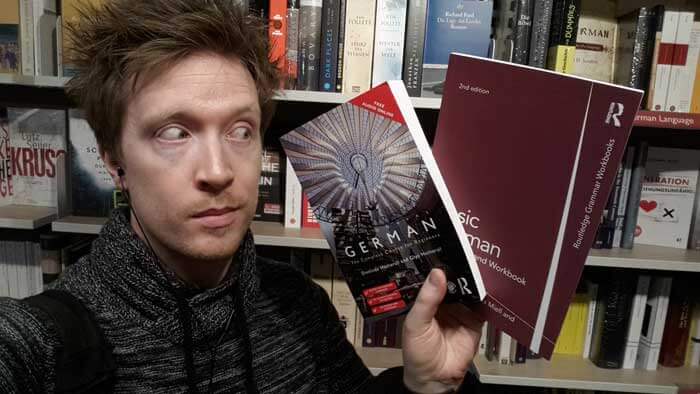 Recently, I started to learn German – my 9th language.

But this time, I decided to do things a bit differently…

I’ve been resisting learning German for a long time.

You see, I’ve wanted to learn German since I can remember, but there’s never been a “right time”. I’ve only been to Germany a couple of times, and never had many German friends.

Learning a language is a long-term thing, and if the only reason you’re learning it is to scratch an itch, you’re bound to come unstuck sooner or later, once you go beyond the honeymoon period, and the hard work begins.

Despite being known as polyglot (a label I dislike), I’ve only ever learnt a new language because I had a strong reason at that point in my life – living abroad, girlfriend, that sort of thing.

So, with a positive lack of Germanic culture or romance in my life, I’ve prided myself in resisting the call to learn German.

So, what happened? Did I just “snap”?

Well, maybe … but for strategic reasons!

Allow me to explain.

By the way, if you want to learn German fast and have fun, my top recommendation is German Uncovered which teaches you through StoryLearning®.

A Strategic Decision to Learn German

For the last 6 months, I’ve been studying Cantonese quite hard.

Daily study, 3-4 lessons a week, putting the hours in.

Recently, however, I’ve been feeling like my progress was stalling.

For every hour of study I put in, I felt I was getting less and less out in terms of tangible improvement in my Cantonese.

If this happens in your learning, it’s time to try something radically different, as if to shock your brain into solving its problems.

Strangely enough, I’ve always found that one of the most effective ways to get through a “language block” is to STOP altogether, and take some time off.

And so what better way to boost my Cantonese than to spend a bit of time learning a language I’ve been curious about for some time?

Here are the specific parameters I set for this learn German project:

I limited it to 1 month for a few reasons:

The aim of this project was NOT:

I wouldn’t want to give the impression that I’m not interested in learning to speak German – because I certainly am. (And I’m sure I will speak in due course.)

I found myself more interested in the intellectual challenge of the language.

And here’s the curious reason why…

I Can Read Again!

The last three languages I’ve learnt have been tough…

In each case, reading the language has been hard, so after working through the beginners textbooks, I based my learning mostly around one activity: Speaking.

This worked really well for learning to speak the language, but I often found myself craving the ability to simply sit down and read a book, or an article … or anything really … simply for pleasure, and without too much difficulty.

And so when it came to German, there was one opportunity that excited me above all else…

(I have authored a book of German short stories, after all!)

So, for this project, rather than following the speaking-first strategy that’s worked well for me with Asian languages, I decided to base all my German learning around self-study – mostly reading.

What I’m particularly interested in seeing is: “If I learn solely through reading (and listening), will how easily will that translate into speaking later?”

I don’t have the answer yet, but I’ll certainly write about it when I do! And the result is the StoryLearning® method!

My 30-day plan to learn the basics of German has been extremely simple:

Study one dialogue from my German textbook every day.

There are about 20 dialogues in the book I’ve chosen (more on that later), and so after accounting for the odd day spent revising, and a few days off, that fits quite nicely into one month.

When you start learning a new language, there aren’t any shortcuts.

You have to build your basic knowledge of the language – grammar, vocabulary, pronunciation.

Textbooks have been expertly written to give you a thorough overview of all the important elements in a language, so it makes perfect sense to devour one textbook in its entirety at the beginning of your studies.

It’s common sense, right? And yet so many people, in their search for the “perfect language learning method”, do anything but simply working through their textbook.

And yet if you simply work your way through your textbook, and learn the contents, you’ll be giving yourself the best possible grounding in a new language.

Given the simplicity of my plan, it was vital to choose the right textbook.

I have some rules for choosing the best language materials, and after a couple of hours in the amazing Foyles Bookstore in London, I settled on two books:

This was an easy decision, actually, as I found most of available German textbooks to be almost unusable.

Without going into a detailed critique, there is a frustrating tendency in modern language textbooks to lead you from one exercise to the next in a childlike way, as if we are incapable of any independent learning.

There’s also a conspicuous lack of actual German content (texts or dialogues) in most books, relying instead on “teachables” – nuggets of grammar and vocabulary which are easy to teach, but meaningless for the learner out of context.

What’s more, those books that do contain substantial dialogues, such as the popular Assimil series use far too much literary (even archaic) language, of very little use for someone who wants to learn to speak German.

Colloquial German was my favourite book by far, and I’ve been enjoying using it over the last month.

I chose Basic German – A Grammar and Workbook in order to have a good, quick-reference grammar. I haven’t found myself using it that much yet, but it’s an excellent book and I’m sure it’ll come in handy soon!

In terms of how I actually study with the book, I follow a “lite” approach of what I describe here.

I read the grammar explanations, but mostly ignore the exercises.

I’m trying to spend as much of my time as possible with the language – reading and listening to the dialogues.

Thoughts On Learning German As An English Speaker

After having my mind bent by Asian languages in recent years, it’s been an incredibly refreshing experience to learn German.

While I wouldn’t want to use the word “easy” to talk about learning German, it does nevertheless feel somewhat easier than normal to get started, because there is simply so much in German that is already familiar to me:

This has made getting started in German not only fast, but also fun, as I’ve been able to get stuck into the language itself, rather than constantly being held back by “unknowns”.

So, here are my (very unscientific) impressions on German so far – from the perspective of an English speaker:

From everything I’ve said above, I’m left with one major thought about the overall strategy of learning German for an English speaker. Here it is…

Because so much of the German language can be understood (or easily deduced) by an English speaker, the biggest opportunity for learning quickly is probably not through formal study, but through massive exposure to the language.

To put it more simply…

Sure, you can study your German textbook to your heart’s content, and learn that way, but you can probably learn much of that stuff just by reading or talking to people. There’s so much in common with English that it might not always need to be studied formally – it can be “picked up” relatively easily.

I’m excited because I’m having a lot of fun, and enjoying a refreshing language learning experience!