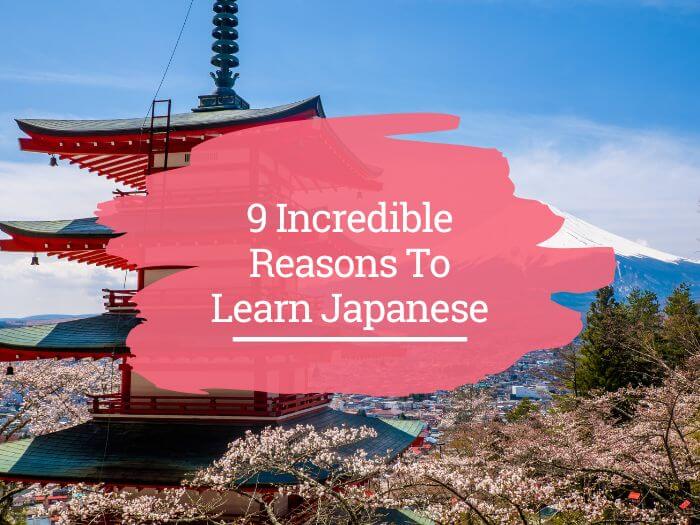 Why learn Japanese? If you're asking yourself this question, then it sounds like you're on the fence about whether or not to learn Japanese.

If you’re just starting out on your language learning journey, it can feel overwhelming to look ahead and see all of the challenges and concepts waiting for you. Don’t get discouraged!

Learning a new language comes with a huge number of benefits, and Japanese in particular opens the gateway to opportunities you might not even realize.

Here are nine reasons to learn Japanese—and they barely scratch the surface of just how far Japanese language ability can take you.

You may already know that Japan is one of the largest exporters of some of the most prominent hobbies in the world. From J-pop music to video games, there’s a lot to love that comes from Japan.

Even if you have no interest in speaking the language on a day to day basis, knowledge of Japanese can open a lot of opportunities to enriching hobbies that might bring you a lot of joy.

As far as video game studios, remember that such powerhouses as Nintendo, Square Enix, Capcom, Konami, Sony, and Sega all come from Japan. Not all games are released to all audiences, and you’ll gain access to games only released in Japan if you level up your language abilities.

But don’t forget that there’s a lot more than video games when it comes to Japanese hobby exports. Anime and manga are another huge realm of enjoyment for a lot of people, but don’t stop there. Consider origami, bonsai, and more!

2. Japanese Is Linked To Other Language Opportunities

One of the nicest things about Japanese is that it’s related to some of the other languages around it.

If you spend time learning kanji, the character system of Japanese writing, you already have an advantage for dipping your toes into Chinese!

For example, the word “college” is the same in both Japanese and Chinese characters: 大学. In Chinese, this would be read as dàxué, while Japanese reads it as daigaku. You might note that the first character, 大, is either da (in Chinese) or dai (in Japanese).

The Japanese language developed from Chinese roots, so you may find the transition from one to the other easier than you think.

3. Expand Your Business And Personal Opportunities

As you may have expected, Japan is a burgeoning business metropolis. You need only take a quick look at places like central Tokyo to see that knowledge of Japanese broadens your business opportunity horizons substantially.

If you’re considering learning another language to open up work possibilities or partner with existing businesses, Japanese is certainly a worthwhile choice to consider.

On average, almost $100 billion is spent each year in a combination of direct investments within Japan and in exports to the country.

Those who speak Japanese plus another language are in high demand. And you may find that some subsets of the workforce—such as teaching English—are almost always hiring.

Of course, Japanese language knowledge doesn’t stop in the classroom. You can use what you learn!

Whether you choose to connect with a pen pal from Japan or visit the country yourself, you will find yourself more equipped than ever to make genuine connections and expand your perspective on the world.

There are many opportunities within Japan that go beyond the typical tourist sites and delve into experiences where Japanese language usage is vital.

You don’t need to miss out on these opportunities if you spend time increasing your mastery of Japanese. The friends that you make could remain friends for the rest of your life!

5. Deepen Your Appreciation Of Japanese Culture

In a similar vein as broadening your horizons, your deep dive into Japanese will unveil a lot more about Japanese culture than what you would get from English-translated materials.

Learning Japanese allows you to more fully understand everything from important events and ceremonies to the way that people behave when they meet you.

A lot of a language’s culture is embedded within the language itself. That’s why Japanese has –masu form, keigo, and kenjougo as just a few of the ways to change formality and tone.

Understanding Japanese culture is easier when you speak the language—even if you’re starting from scratch!

6. Boost Your Memory And Brain Function

Of course, we can harp on how awesome Japan is all we want, and a lot of people would tend to agree. That being said, learning Japanese can help you in more ways than just connecting you with Japanese people and culture.

Did you know that learning a second (or third, or fourth…) language literally boosts how your brain functions?

That’s not an exaggeration—studies have shown that brains that remain engaged with learning languages tap into the same modes of operation that children do when they’re learning to speak.

This is called plasticity, and it refers to how effectively your brain learns and remembers new things.

If you encourage plasticity in your brain, you're more likely to remain quick-witted, and your overall cognitive function increases.

In fact, those who regularly exercise their language-learning muscles boost memory and recall and are able to hold more items in their short-term (or “quick access” memory) than those without practice.

7. Level Up Your Native Language Too

While two highly unrelated languages might not have a single root or sound in common, there’s still a lot that they share.

All languages are made up of constituent parts, like nouns, verbs, and sentence structure. By mastering these elements in a foreign language piece by piece, you are more equipped to identify them in the language(s) you already speak.

This comes with a number of benefits. People who speak at least two languages tend to find learning new content easier, and they average more advanced word choice than their monolingual peers. You can level up in two languages at once!

Part of increasing your overall brain health by learning a language is improving how you make decisions.

As it turns out, people who know an additional language beyond their native tongue make better choices overall, and especially in that language. Scientists are still studying why, but it appears that you are more logical and rational in a non-native language.

They posit that it has something to do with the areas of your brain that activate when you learn new languages. Because new languages are often taken in factually—here’s a list of vocabulary words, and don’t forget these verb forms!—they stimulate the rational part of the brain.

Compare this to the emotional feeling you get when you hear “I love you” or “I’m proud of you” in your native language.

Studies show that these types of statements produce electrical activity on your skin that indicates an emotional response—but not in languages you’ve learned later. You’re training your brain to make better decisions by practicing a non-native language!

Of course, the brain train doesn’t stop there, and there are some things that Japanese in particular can contribute to your cognitive abilities.

Think of all the characters that you learn as part of your Japanese language education. Those who study languages with characters rather than solely phonetic letters stand to improve their spatial reasoning and visual interpretation.

Part of the reason this happens is because Japanese has you taking pieces of kanji and putting them together in new orders. This exercises the part of the brain that certain questions on IQ tests also do. You know the ones—take a shape, flip it three times, and then identify what it looks like. This is called spatial intelligence, and it has to do with visualization, mental reasoning, and object permanence.

This can help you in a lot of other ways, from improving your ability to dance (proprioception, or having a better visualization of what your body looks like in space) to becoming better at solving puzzles. Japanese has you covered!

Why Learn Japanese? For The Huge Number Of Benefits To Your Life

So, why learn Japanese? Of course, the only real reason you need to study Japanese is because you want to.

But if you’re looking for more motivation, there are a lot of contributions that Japanese study can make to your life and wellbeing—not only academically, but also personally, mentally, and in your work.

Don’t give up on Japanese just because it seems tough. Like any language, it can turn into a snowball. Get started with something small, and the further you roll, the bigger—and easier, and faster—you’ll start to pick things up.

And of course, if you want to make learning Japanese both fun and effective, use the StoryLearning® method and read stories to pick up Japanese naturally.