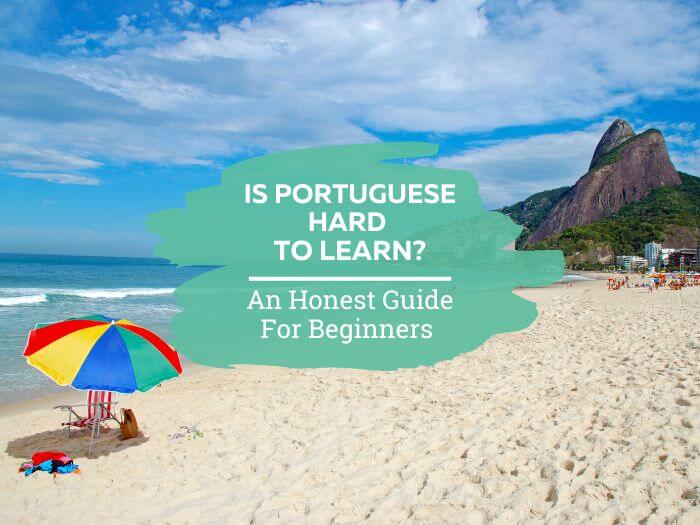 Is Portuguese Hard to Learn? An Honest Guide For Beginners

You may have heard horror stories about learning Portuguese: the gendered articles, the verb tenses, the accents! So you're probably wondering – is Portuguese hard to learn?

In reality, learning Portuguese is just like learning any other language: it requires some time and dedication. The good news about that is that anyone can learn Portuguese, including you!

So, what’s got people so confused with Portuguese? We’ll explore some of the language’s trickier areas and how to manoeuvre them, and also highlight some ways in which learning Portuguese is easier than you might think.

If you like watching videos, hit play on the video version of this post below. Otherwise, keep scrolling to read the article version to find out – is Portuguese hard to learn?

For gender-neutral languages like English, discovering that everything, from tables to foods to cities and rivers all have genders in Portuguese can be very confusing at first. Truth be told, it does take a bit of practice to wrap your head around this.

While in English, we would use the gender-neutral article “the” in front of objects, in Portuguese they use a for feminine objects and o for masculine objects.

Feminine words that end in “a”

Masculine words that end in “o”

There are, of course, some exceptions. The word for day, dia, for example is masculine even though it ends in an “a” so the article would be “o” as in o dia.

The rest you’ll have to memorise over time. The good news is that if you use the StoryLearning® method and read a lot in Portuguese, you'll pick up the word genders naturally without having to “study” them.

It’s common for people to drop the subject eu and just say:

The subject eu is implied by the conjugation of the verb sair.

Here are some more examples:

Leaving off the subject is very common in spoken Portuguese, but once you master the verb conjugations, this habit native Portuguese speakers have of dropping the subject won’t confuse you anymore.

The Portuguese language has approximately 171,000 words. That’s a lot of vocabulary to learn!

But there’s a silver lining. Portuguese is a Latin-based language, as are all the other Romance languages (Spanish, French and Italian). But did you know that approximately 60% of English words are Latin-based?

That means that there will be a lot of words you can easily recognise in Portuguese because of the shared Latin roots.

If you took Latin, French, Spanish or Italian in high school, you’ll be able to recognise a lot more words than you think in Portuguese.

Just beware of the false friends (words that look similar but have different meanings):

Portuguese pronunciation is very different from English and there are certain sounds that exist in Portuguese that may be awkward at first for an English speaker.

The best thing to do as a beginner is to learn the pronunciation of the letters of the alphabet in Portuguese. This will start to tune you in to the sounds of the language.

Portuguese also has some consonant combinations that make distinct sounds when they’re together. For example:

Portuguese is an accented language and while some people dread having to learn all the accents, they are actually very useful guides in learning pronunciation. They basically tell you how a word is pronounced.

So instead of seeing them as an obstacle, see them as a helper that will improve your Portuguese pronunciation.

Here’s how to tackle the accents in Portuguese:

Acute accents emphasise the sound of the vowel they’re used on, elongating them slightly.

In these cases, the pronunciation of the vowel will have a shorter, more closed vowel sound.

The cedilha in Portuguese is borrowed from the French. It is a little hook underneath the letter ç that indicates an “s” sound.

The tilde accent is a wavy line over a vowel that gives it a nasal sound.

Every language has slang. There’s no way of getting around it. The best way to approach learning slang is with curiosity and a sense of humour.

Here are some examples of Brazilian Portuguese slang:

Is Portuguese Hard To Learn?

Learning any language will require effort. But there’s no reason to give up before you start.

So, is Portuguese hard to learn? There are some special challenges to learning Portuguese such as the gendered articles, implied subjects and slang.

But there are also some aspects of Portuguese such as the common Latin roots, the helpful accents and the fun you can have with slang that will make it easier. Boa sorte e bons estudos!