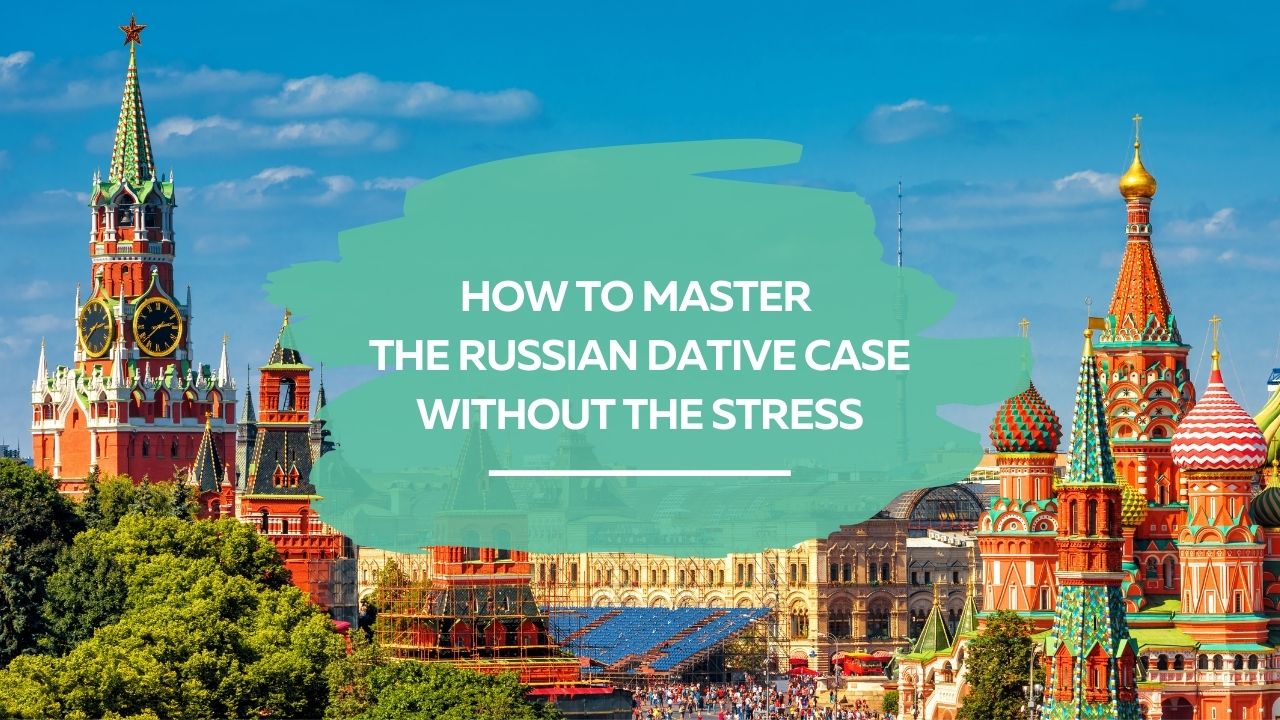 How To Master The Russian Dative Case Without The Stress

When you learn Russian, the grammar can be stressful, especially the case system and the Russian dative case.

But while the Russian cases can seem pretty complicated, believe it or not, if you speak English you use a kind of case system already. So that means the dative case isn't as tricky as it first seems.

In this article, I’ll take you through the Russian dative case step-by-step so that by the end of this article, you’ll be able to:

So let's get into it so you can become an expert on the Russian dative case!

What Exactly Is The Russian Dative Case?

Before we dive into the dative case, let me give you an overview of the Russian case system. In English, we use prepositions and word order to express how words relate to each other.

In Russian though, we use cases instead. So what does “case” look like exactly? Think of it this way, we know that “the bird” and “the bird’s” have different roles because of the ending of the words. You can’t simply say “the bird’s is flying” because the word’s ending tells you that “the bird’s” is not the subject.

And it's the same idea in Russian.

So What About The Dative Case?

In Russian, you use the dative case to indicate who receives something else. In grammar books this is usually called the indirect object, but you can think of it as answering two main questions.

Let’s look at an example in English

In both of these examples, there is one subject (Charlie/Dan) and two objects. So in the first sentence what’s the difference between “Dan” and “the book” exactly?

In Russian “Dan” and “my friend” would both be in the dative case because they receive another object. So, you can expect the Russian dative for a range of situations. In particular you see when someone or something receives, gets, is given or is told something else.

In fact, we used the dative case at the beginning of the article with the greeting всем привет. Normally, the expression is translated as “Hello all” but if you render the phrase more literally it means “Hello to all” with всем being the dative form of весь. In other words, everyone is receiving the hello.

So, the big question now is – how will you know when a Russian word is in the dative case? Just like our English example with “the bird” and “the bird’s” the ending of the word will change.

Thankfully, the rules for making cases in Russian are very consistent, so once you know a few patterns, you can recognise almost any word in the dative case. Now we’ll go over the main groups so you can see for yourself.

With masculine and neuter nouns, you can identify the dative case by the letters у and ю.

For masculine words that end in a consonant, you simply add the letter у on to the end. For neuter nouns ending in -о, you replace the final letter with у.

Feminine Nouns With -A And -YA

Feminine Nouns Ending in -a and -я

Verbs That Often Use The Russian Dative Case

Now that you know how to recognise the dative and form it, next we can move to verbs that regularly use the dative case.

Here are some examples with the dative case in bold.

Impersonal Constructions And The Dative Case

Okay, so what’s an impersonal verb? Well, in English you could say:

But what exactly is the “it” here?

It could be the situation or the weather. And while we don't often use these verbs in English, Russian uses them a lot. In Russian, these impersonal constructions describe general situations and statuses. More importantly, when these constructions are used they come with the dative case.

Here are some examples. These include feelings, temperature and age. And as you can see, talking about age is another great example of why you should never translate things literally.

There are also a series of words that express status that always use the Russian dative case.

And here are some more examples for you in sentences:

Liking Things With The Dative Case

Probably one of the most important things you can do with the dative case is express that you like something. For this, you use the verb нравиться.

But it’s important to note that the person who likes something is in the dative case while the verb нравиться changes according to what is liked. For one object, you have to use нравится and for multiple objects it becomes нравятся.

The Dative Case With Prepositions

Up till this point, the Russian dative case has been somewhat similar to the way we use “to” and “for” in English. Prepositions are another story entirely.

This is where most Russian learners find the most difficulty with the dative case. Thankfully there aren’t many prepositions to learn.

Here’s a short list of the most important ones:

Check out these examples:

Going To Someone And The Preposition K

If you’re visiting a friend, stopping by an office or have an appointment to see someone, you need to use the dative case. This will very often be accompanied by the preposition к.

The Dative Case and PO/ПО

Now for something some tricky – the preposition po/по. This is the most common preposition to use with the dative. However, there is no one translation that works for this small two letter word as it is used so extensively in Russian. Think of it as a multi-purpose preposition.

Rather than trying to explain its wide range of uses, I’ll show you some examples:

When describing a single action, we use the accusative case. However, to talk about repeated and regular actions, you’ll need to use the dative case.

So there you have it. I know that was a lot. But you’ve made it to the end! Now, with this you should have a strong handle on how the Russian dative case works.

Try not to get hung up on the details and instead, just know the basic uses of the dative case in Russian.

And really, the best way to familiarise yourself with the dative case is to read and listen to Russian as much as possible, especially stories – that's what the StoryLearning® method is all about.

Over time, as you read Russian stories, using the dative case will feel more natural as you get used to its various uses. And before you know it you’ll be using по and к without a second thought.

So until next time. And as always Удача из удач! (Best of luck!)