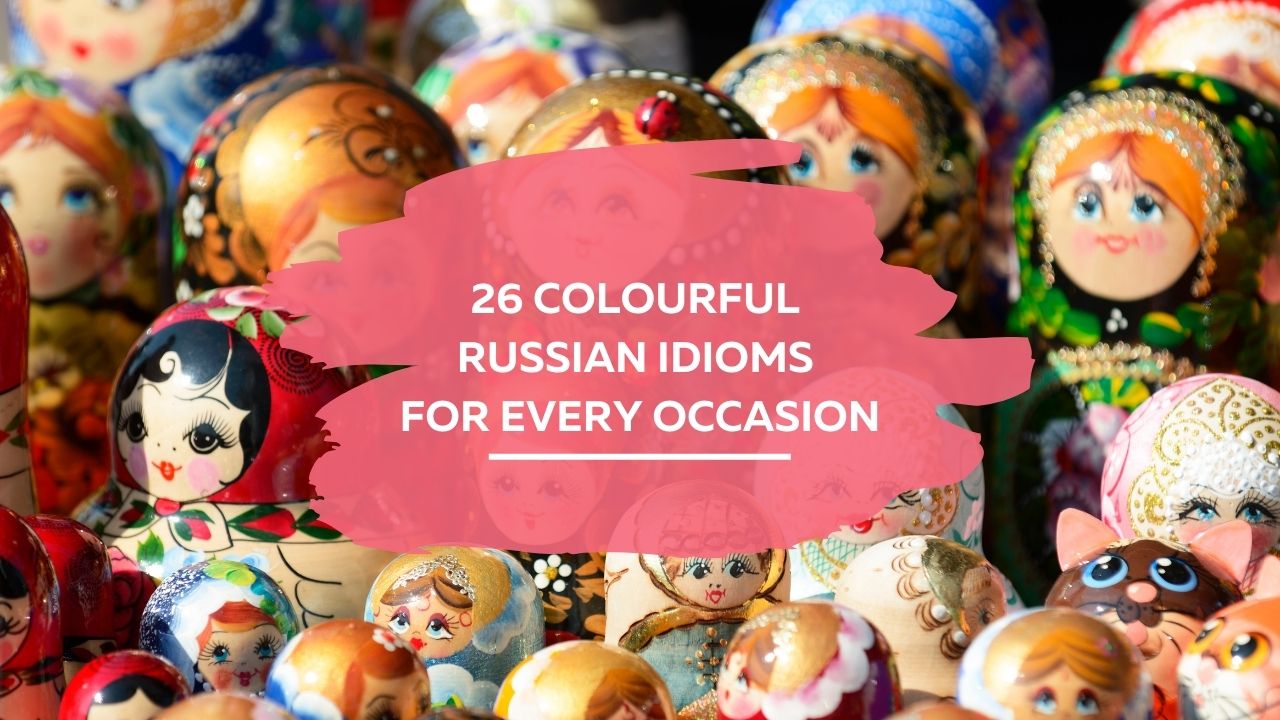 26 Colourful Russian Idioms For Every Occasion

When you learn Russian, you'll get a lot closer to fluency, faster, if you pick up some Russian idioms.

Idioms are wonderful things. They let us spice up our conversations to give them some flair or colour. They let us say something without outright saying it. And idioms also remind us that we should never translate something word for word.

Think of how weird the phrase “raining cats and dogs” sounds to someone learning English. Similarly, Russian idioms can be weird, funny, and down right strange at times.

So with this article, you'll discover:

Talking About Idioms In Russian

Talking about these expressions is a bit different in Russian. While the word идиома does exist in Russian, it’s much less often used than фразеологизм (phrase) or выражение (expression).

For this article, an idiom is any expression whose meaning is unclear when translated literally. So something like делать из мухи слона (to make an elephant from a fly) is an idiom, just like львиная доля (the lion’s share).

The only difference is that as an English speaker, you’ve probably already heard the second one.

So let’s jump into some Russian idioms.

How To Wish Someone Luck In Russian

When wishing someone a good journey, you have a lot of expressions to choose from. However, translating some of them literally will sound a bit weird.

If you’re wishing someone luck on a performance however, you’ll want to use ни пуха ни пера. Most often this is answered with к чёрту (to the devil) although no one is certain why.

This expression is one of the best examples of why you should never try to translate things literally and why you have to learn Russian in context. This is something you say when you hope that they had a good time at the banya/sauna/or shower.

Idioms are wonderful tools for exaggeration. Generally speaking, Russians adore expressions that overstate how far away something is or how it’s just so close that you could almost grab it.

Just as Russian speakers like to exaggerate distances, they also like to talk colourfully about when events will happen.

As such, if something is going to happen soon it could be just in front of your nose, and it something is happening slowly it moves with turtle steps.

One of the most colorful Russian idioms you’ll find. It’s something like “when pigs fly” or in other words, saying that something will never happen.

Animal And Plant Idioms In Russian

You’ve learned a bit about how to exaggerate when something happens and how far away it might be. Now it’s time to talk about idioms that use nature.

As with other languages, there are loads of Russian idioms that use comparisons to plants and animals to make a point.

However the белая ворона (the odd-one-out) can be found in classrooms, work offices, and any group where people gather regularly.

This idioms is another demonstration of the Russian fixation on hedgehogs (ёж/ёжик). You say this when something is so obvious that even a passing hedgehog would understand.

Russian took the same expression from Aesop’s fables and it has the same meaning as it does in English.

This expression isn’t about food, but about lifestyle. One can also live в шоколаде, which means to be financially and materially comfortable and without any great worries.

You can call someone as a большая шишка the same way you would call them a big shot, a big deal, or the head honcho.

This last group of Russian idioms don’t fit neatly into any category, but they are very good to know. So enjoy some other colorful phrasing to talk about the world.

You use this to describe people who are very close and have similar personalities or tempertments.

Today, the word преткновение is fairly archaic, but you hear it just for this expression when communications reach an impasse. A matter that people just cannot work out is the камень преткновения.

This refers to when there’s a burst of heat at the beginning of autumn, why it refers to babas (old women) even the dictionary writers can’t say.

When it comes to Russian idioms, this article is a good starting point but there are a lot more to learn.

Like all languages, Russian has loads of expressions, turns-of-phrase, and idioms that people like to save up for just the right situation. Not forgetting Russian slang.

That being said, you should have some of the basics abouts idioms to:

The best way for you to internalise these Russian idioms is to implement the rules of the StoryLearning® method. So make sure you read short stories in Russian and books in Russian

As you read, you'll see the idioms in context over and over again. So you'll start to pick them up and use them without really noticing it!

So go forth and read! And until next time удача из удач (best of luck)!