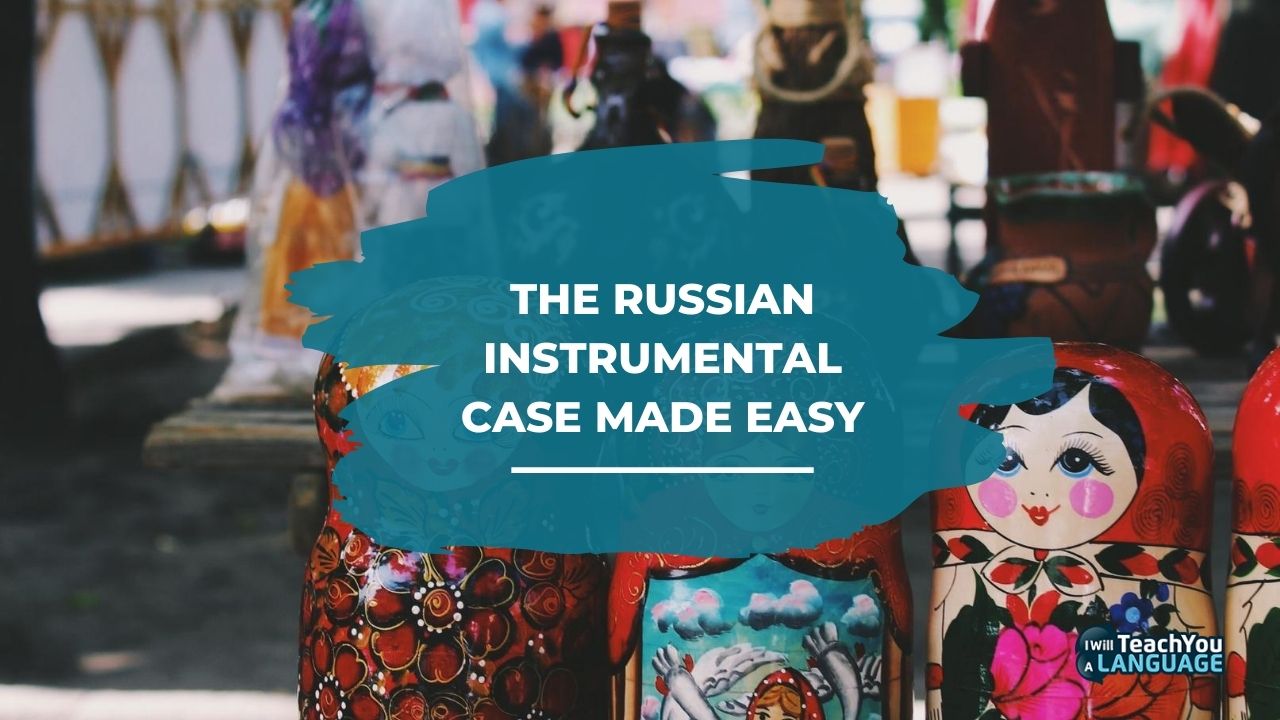 The Russian Instrumental Case Made Easy

If you’ve been learning Russian, then you already know how complicated and intimidating the case system can be. But I’m here to say that it doesn’t have to be!

Case may seem hard, but we actually have something similar in English and learning the Russian form just takes practice.

As with the dative and accusative case, I’ll break down everything that you need to know about the instrumental case in Russian.

By the time you've finished reading, you’ll have a strong understanding of:

So let's get into it.

What Does The Russian Instrumental Case Do?

In English, we usually mark the relationship between words with word order and prepositions.

In the first example below, we know that “books” are the object because they come after the verb. But in the second example, we know that “a fork” is a tool because it comes with the preposition “with”.

In Russian, word order and prepositions are important too, but so is a word’s case. This means that the end of word changes to describe its role in a sentence. This is just like how in English we distinguish “the cat” and “the cat’s” because of the -‘s at the end.

We know that “the cat purred” is correct, while the “the cat’s purred” is wrong. Russian uses the same principle for the instrumental case and puts something at the end of a word.

So what does the instrumental case do exactly?

In Russian, we use the instrumental case to describe company, the means of doing something, or additions. In other words, when we talk about the Russian instrumental case, we’re answering two big questions:

In English, you can imagine this when we use the prepositions “by” or “with”. Here are some examples that would take the instrumental case in Russian.

Russian has a few other uses of the instrumental case, but we’ll get to those after you understand what it looks like.

How To Spot And Make The Instrumental Case

Now that you’ve got an idea of what the Instrumental Case does in Russian, I’ll show you how to recognize the case and how to make it.

Masculine And Neuter Nouns In The Instrumental Case

The Instrumental Case For Feminine Nouns

For feminine nouns, you can tell that something is in the instrumental case by the endings -ой or -ей. It’s worth noting that these endings have the same vowels as -ом and -ем from before.

Feminine Nouns Ending in -a

The Instrumental Case For Plural Nouns

For all plural nouns, there are only two endings to look for. These are -ами and -ями. For nouns ending in a consonant, -а and -о, we use the ending -ами. And for all other nouns, you’ll find the ending to -ями.

As I said before, the two most common ways that you’ll see the Russian instrumental case used is to express company and instrument. Or in other words, with what or by what means or with who.

I’ll start with the idea of company. Almost always this will include the preposition с and can be translated into English as “with”. Notice that this includes the company of people as well as things.

The other most common use of the instrumental case is to show by what means, or by what instrument. While we have to use a preposition in English “cut with a knife” or “write with a pencil”, these same expressions in Russian don’t use any prepositions.

Verbs That Take The Instrumental Case

Every language has its unique quirks and the Russian language has quite a few. One of these is a relatively short list of verbs that use the instrumental case.

You might be able to predict some of these verbs as they use the word “with” in English. Others you’ll simply have to learn by heart.

Here's how you'd use these verbs in a sentence:

This next use of the instrumental case is a bit more tricky to understand, but it works a lot like the verbs from before. There are a handful of verbs that show the state of something. And these use the instrumental case to show equivalence or what a person is. This includes the verb быть (to be) in both the past and future tense.

The verb являеться is particularly interesting. While Russian doesn’t normally express the equivalents to “is/be/are” you can find this verb in legal and official documents, or situations where things must be unambiguous.

In the list and the examples below, you can see that these show something’s position. What’s important to know is that this refers to a stable position.

As I showed you in my explanation of the Russian accusative case, if something is moving to a new place, you should use the accusative case. If something’s position stays the same, though, we use the instrumental case.

Let’s look at some examples to show you what that looks like:

And here's how the look in sentences:

Notice that with the preposition между (between) both words that follow it (обедом и ужином) take the instrumental case.

Making Use Of The Russian Instrumental Case

You’ve finally made it to the end! Thankfully, the uses of the Russian instrumental case are pretty succinct, so it’s a bit easier than some of the others.

Now that you’ve gotten to the end of this explanation though, you could have a pretty good idea of how the Russian instrumental case works and when you should use it.

While this article has given you some of the basics, the best way to really master the Russian instrumental case is with plenty of practice. My favourite way to do that is to immerse myself in Russian stories, so I can pick up grammar like the cases naturally.

As you keep at it, you’ll find yourself using the instrumental case with more ease.