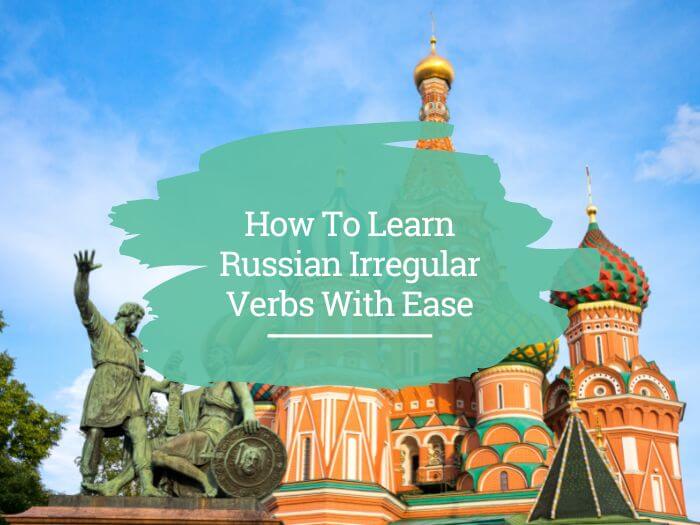 How To Learn Russian Irregular Verbs With Ease

Learning Russian, or any language means learning certain patterns. In other words, the structures that make up word order, or declensions, or verb conjugation.

With languages like French, Spanish, and Italian, learning verbs comes with memorising loads of irregularities and exceptions.

But what about Russian? You might ask yourself if there are a lot of irregular verbs in Russian. Or you might wonder how you can learn Russian irregular verbs.

That’s exactly why this article is dedicated to irregular verbs in Russian.

So let’s dive in!

An Overview Of Russian Verbs

Let’s start with some good news. Overall, Russian verbs are actually quite regular. That means that once you know how Russian verbs conjugate, you’re not going to run into any big surprises. And that applies for every tense as well!

So what makes a verb irregular in Russian? That really depends on who you ask. There is a long-standing tradition within Russian language grammar which says that there are only 4 Russian irregular verbs.

However, during conjugation, there are few other quirks that verbs can have. These include things like vowel changes, added letters, and different stems.

As you read on, keep in mind that any verbs formed from the ones discussed will have the same irregularities.

Among all Russian verbs, these four definitely have the most irregular endings. You can see in the table below how stems change and that есть and дать use the ending -м rather than -у or -ю for the first person singular.

These four verbs are used quite frequently, so you should try to learn their conjugations early on. This will come in handy when you come across other verbs that are based on them, like in the examples below.

Overall, the verb structures of Russian are quite predictable. The verb говорить (to speak) conjugates predictably in the present and past tense.

However there are a small number of verbs with completely different past tense forms. This is called suppletion (супплетивизм) and it works in Russian exactly as it does in English. In the example below, none of the three forms of “to be” look like each other.

The most well-known verb of this kind in Russian is есть (to be) which uses two different stems for its future and past tense.

The vast majority of Russian verbs are regular and form their past tense forms in a highly predictable way. However, alongside был/есть/буду, the major exception is the verb of motion идти with the past tense form of шел.

This also applies to verbs that are formed from идти.

This last category of verbs is the most friendly to learners. In fact, calling them ‘irregular’ may be stretching the truth because the small changes that occur are so predictable. Either way they are good to know about.

With verbs that are part of the second conjugation group (the ones that mostly end in -ить), the first person singular may feature consonant mutation.

If you know the phrase я тебя люблю (I love you) then you’ve already seen this in action. The letter -л- is inserted at the end of the first-person singular, but not for any other form.

The good news is that these changes are very regular. Only verbs with specific consonants add in the -л- like любить.

The other change in conjugation that you’ll see is with consonant changes in the first-person singular. These also occur in the second conjugation.

Although they may look strange at first, these sound changes actually make some sense, especially when you know Russian spelling rules.

Take прошу (I ask) as an example. The conjugation would (in theory) be просю, but that ‘syoo’ sound sounds weird in Russian, so it becomes ‘shoo.’

These changes only occur in the first-person singular and they follow a pattern similar to many comparative adjectives.

Taking Your Russian Into Daily Practice

Believe it or not, that’s almost everything about Russian irregular verbs. There are only a handful of really irregular or unpredictable verbs.

Thankfully, most of the other Russian irregular verbs still follow a certain pattern, so many of their endings are easy to predict with a bit of practice.

And of course, practice makes perfect in this case and there’s no better way to to get some than by learning with stories. So make sure you read Russian books or short stories in Russian. That way you'll see the Russian verbs in action and soon get the hang of them.

Now you’ve got a solid idea of

So go out and try putting some irregular verbs in your conversations! As always Удача из удач! (Best of luck!)