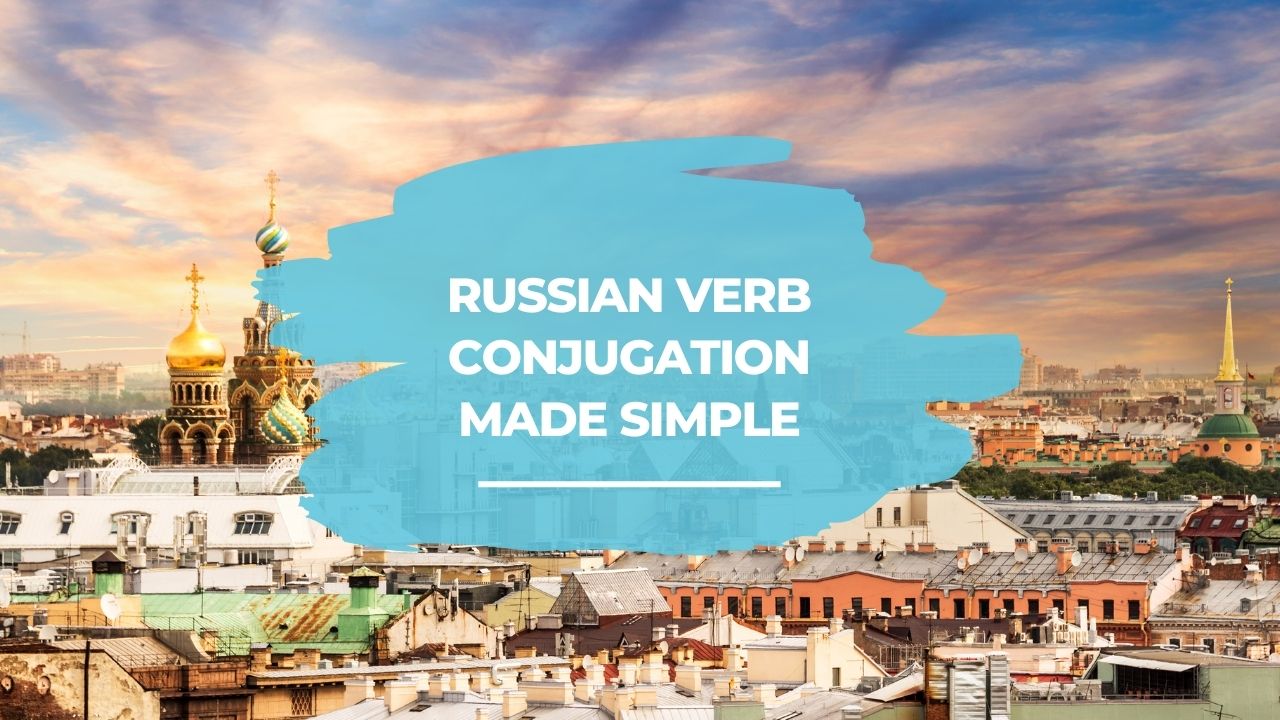 When you first start learning Russian, Russian verbs can look a bit hard to understand and even more difficult to master.

Although Russian verbs conjugate according to person and number, the actual forms are a lot easier to learn than you might think.

And that’s why this article is going to be all about getting comfortable with Russian verb conjugation.

By the end of the article you should have a broad understanding of:

So let's get started.

To put it simply, conjugation is how a verb changes to “match” with the person doing an action. In English, we have a very narrow version of conjugation with only the third person singular (he/she/it) changing.

The presence or absence of the -s is all that remains of English conjugation. Although this used to be much bigger in the days of Milton and Shakespeare.

So verb conjugation is making sure that the ending of a verb matches its subject. If you’ve studied languages like French, Spanish, or German, then you’ve already seen plenty of this.

But what is Russian verb conjugation?

In Russian, verbs conjugate for six different forms. This pattern goes according to the person/thing doing the action and how many there are. Or in other words, you need to change the verb according to these subjects.

Why Is Conjugation So Important In Russian?

So now that you know what Russian conjugation is, you should know what makes it so important. In English we usually have to put the subject of the sentence before the verb. If you don’t things get a bit awkward.

However, Russian has a totally different take on what verbs and subjects do. And because of noun cases, Russian has a much more free word order than English.

Sometimes the verb that comes with a subject may come later in a phrase. In the two examples below, the subject and verb stand apart from each other.

However, that’s just when the subject is actually used. Very often the subject of Russian sentences won’t be stated explicitly. In the next example, the subject ты is absent entirely. However we know that говоришь (you utter) refers to “you” because the verb ends in -шь.

You can’t understand who’s doing the action without understanding the verb ending. So understanding verb conjugation in Russian is absolutely essential to really mastering the language.

How To Conjugate A Russian Verb

While there’s no way to get around learning Russian verb conjugation, it’s not as hard as you might first think, despite what the grammar villain is trying to convince you of!

The good news is that that last part of the conjugation remains very predictable. There are only six endings to learn and they are very, very consistent throughout the language.

So then, what’s the bad news?

While the final endings are consistent, the connecting letters for verbs can take some time to master. The real trick of conjugating a verb in Russian is to find its stem and to use the right connecting letter. Once you have that, you attach these endings and you’re done. The problem is how.

The majority of verbs end in -ть in their infinitive. And while knowing the infinitive of a verb is great, you can’t rely on it to get the stem.

So to know how to make every form of a verb you should learn:

And this becomes a lot easier when you realize that Russian verbs fall into a few groups. And learning these makes it much easier to conjugate verbs in Russian.

Traditionally, teachers and textbooks will tell you that there are two verb conjugations in Russian.

And this isn’t wrong, but it’s probably better to say that there are two large categories of Russian verb conjugations, with a few subcategories tucked inside.

The first conjugation (первое спряжение) is sometimes called the -е/ё group. The reason is simple. Often with the first group, the connecting letter is either -е or -ё followed by the expected endings.

You can identify these by their endings. The majority of these verbs end in
-ать, -оть, -уть, -ять, -ыть, -ти, -чь. There are also a few verbs that end in -ить that fall into this first group.

To conjugate them, you need to add the right endings onto the stem of the verb. For many first conjugation verbs, you can find the stem by removing -ть or -ти from the infinitive.

However for some verbs, the stem can be quite different from the infinitives. For verbs like жить (to live) and писать (to write) you have to learn the stem separately.

The second verb conjugation in Russian (второе спряжение) is а bit easier to manage. Almost all verbs with infinitives that end in -ить belong to this group. They have the following endings.

While you can often (but not always) find the stem of verbs in the first conjugation by removing the letters ть, you more often have to take off ть, as well as the connecting vowel for the second conjugation.

There’s also a group of Russian that appear a bit differently. Really, they belong to the first conjugation, but they have stems that are shorter than you’d expect and insert the letter -у before the verb endings.

These verbs almost always end in -овать or -евать and the majority of them are loan words, often from Latin, French, German, or English

While the endings of verbs might be regular, their connecting letters aren’t always. You may have noticed Russian’s tendency to “soften” certain consonants like близкий becoming ближе or короткий becoming короче.

And this “softening” happens with verbs as well. Letters like ст, д, з, т, г, and к often change in the different forms of the verb. This means that sometimes the я and/or они form of a word can have a different stem than the other forms.

However, for the verbs видеть (to see) and грузить (to load), only the я form uses a different stem. This happens according to Russian sound changes. And while this may seem confusing, these sound changes are somewhat regular.

Finally we come to the irregular verbs of Russian. And thankfully, there aren’t that many. In fact, the Russian language has only four verbs they call разноспрягаемые глаголы (differently conjugated) that have irregular conjugations that you’ll have to learn separately.

The verbs хотеть (to want) and бегать (to run) take their conjugations from both the first and second conjugation and aren’t too difficult to learn.

The verbs есть (to eat) and дать (to give) however, come from Old Slavonic and have verb forms that are somewhat archaic and unpredictable.

Russian verb conjugation can be a lot to take in, but there’s good news to be had. Once you familiarize yourself with a verb’s conjugation, you can use it for any word derived from it, which will make learning so much easier.

And since the Russian language forms words like this often, you can use this to familiarize yourself with a lot of verb forms in a very short time.

Russian verb conjugation can be challenging if you’ve never dealt with it, but there is quite a lot of regularity to it.

Just remember to keep immersing yourself in Russian, with a fun and effective method like StoryLearning® and changing verbs into the right form will become second nature. These 8 Russian books for beginners will be a great starting point for Russian verb conjugation practice through immersion in stories.

While it’s going to take a while to fully master the Russian conjugation system, this article should give you a good start.

So now you should have a solid of idea of: