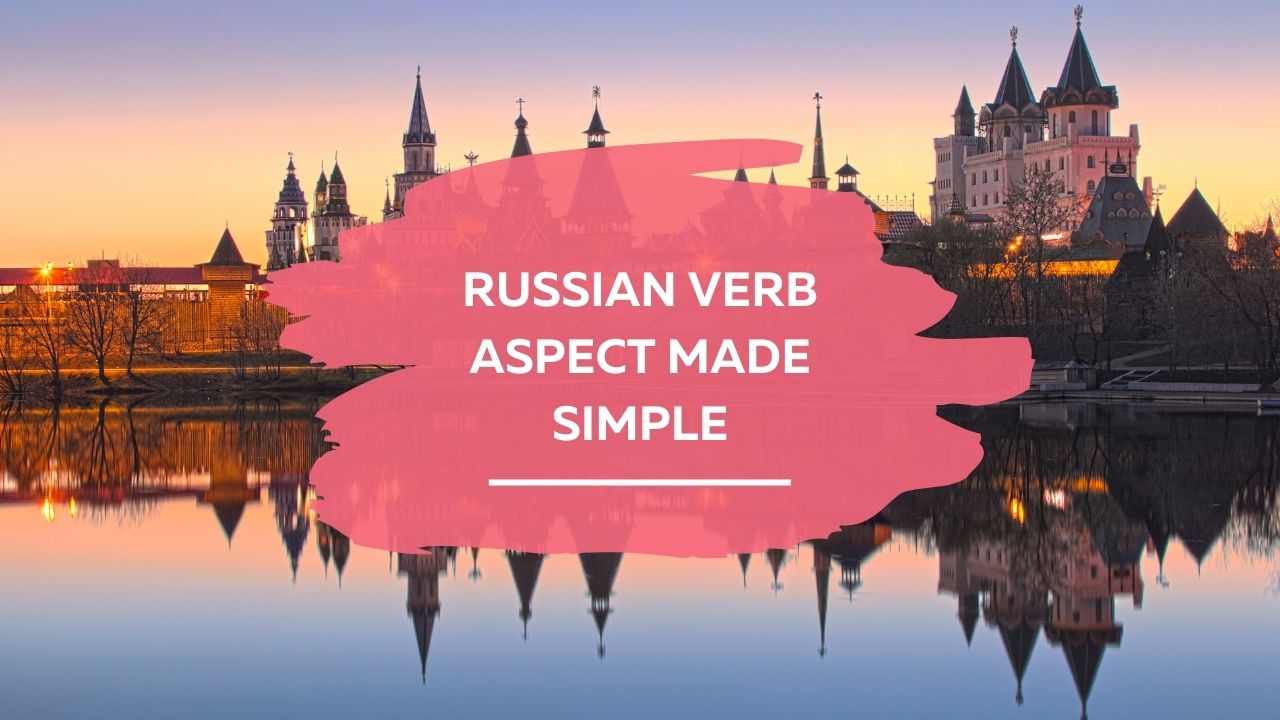 In Russian though, tenses aren’t classified with labels like imperfect and near future. Like other Slavic languages, Russian uses something called ‘verbal aspect.’

Understanding verbal aspect in Russian is pretty important, so this by the end of this article you’ll understand:

So let's jump in!

What Is Verb Aspect In Russian?

Let’s start this by looking at verb aspect in English. Consider the pairs below.

When you learn English grammar, all of these forms are called ‘the past tense’ but it’s easy to see how these four sentences have quite different meanings.

So really the past tense is more of a category than a tense. And you can think of the Russian past tense this way too.

But the major difference is that Russian verbs have aspect (вид). This expresses the ‘completeness’ of an action – whether it’s finished or ongoing. So looking at the English examples through this lens, you can see a similar distinction.

The difference between Russian and English is that English uses the word “write” (and its different forms) no matter what. However, to say “I wrote” in Russian would use one aspect of a verb, while “I was writing” uses a different one.

Aspect is an element in all Russian verbs. So that means that every verb you learn will either be perfective or imperfective.

Now that you’ve got a general idea, let’s look at some examples to see how verb aspect works in Russian.

Two verbs that showcase the distinction between the imperfective and perfective are пить/выпить and читать/прочитать. You could translate these as “to drink” and “to drink” respectively, but that doesn’t fully express their meaning.

The imperfective is an action that’s in progress, habitual, or ongoing.

It can also refer to actions that are incomplete or the completeness is unimportant.

(whether the coffee was finished is unimportant)

You also use the imperfective when time is a greater focus. Additionally, if you can use a word like часто (often), обычно (usually), or регулярно (regularly) then you’re talking about the imperfective aspect.

While the Russian imperfective aspect is used for something ongoing, the perfective is used to express a completed, finished, or instantaneous action.

It’s worth noting that no perfective present tense can exist. So this means that as a whole, Russian verbs will have a total of five tenses.

By now, you can see some of the distinctions between the two verb aspects.

In fact, the two aspects may be used to contrast actions.

How To Form Perfective Verbs

Generally speaking, you’ll encounter the несовершенный вид (imperfective form) of a verb first. As the two aspects come as a pair, there are several ways to identify them. This includes 1) using prefix 2) adding syllables and 3) having entirely different roots.

The majority of Russian verb pairs differ from each other with a prefix. In this case, the prefix is attached to an imperfective verb which makes it perfective. Some of the most common prefixes are below with the imperfective form given first.

By far, most common prefix that marks a verb in the вершенный вид is по-

And it’s worth noting that по- is regularly used to put verbs of motion into the perfective.

There’s another prefix in Russian that makes a verb perfective, but also changes the meaning. The addition of за- means “to start” or “to begin doing something”.

Additionally, many verbs in Russian can take on multiple prefixes to mean different things. But often these meanings are quite logical based on the prefix as you can see below.

While most Russian verbs change aspects through prefixes, some do so by adding or removing a syllable in the verb.

With these verbs, the perfective form is shorter as the imperfective is the one to take the extra syllable.

Generally speaking these pairs come from verbs with a perfective form that is made through adding a prefix to a basic imperfective verb. So in this case the imperfective писать (to write) takes the prefix под- to take on the meaning “to sign”.

In addition, a number of other verbs differ in their aspects according to a vowel.

A small number of Russian verbs form their verbal aspects with entirely different words. And you’ve probably already run into some like говорить / сказать. Fortunately, there aren’t many of these verbs overall.

Plus, some verbs only have one aspect. The examples below are only in несовершенный вид because describing them as completed actions makes no sense. That's because you can’t store an object or signify something to completion.

Most likely you already know a verb like this. Быть (to be) can only be imperfective because something can only be or exist continuously.

Finally, for some verbs the imperfective and perfective forms are the same. Quite a lot of these have infinitives that end with -овать.

As intimidating as verb aspect may look at first, it means that you only have five tenses to think about. And as long as you think about whether an action is complete or ongoing, you’ll be using aspect after just a bit practice.

At this point, you should have a better understanding of aspect including

Of course, practice makes perfect and what better way to practice than through stories. So apply the rules of StoryLearning® and read books in Russian or Russian short stories. As you read, you'll see Russian verb aspect in action and that will help you to learn and use it naturally.

Happy practicing and until next time – Удача из удач! (Best of luck!)