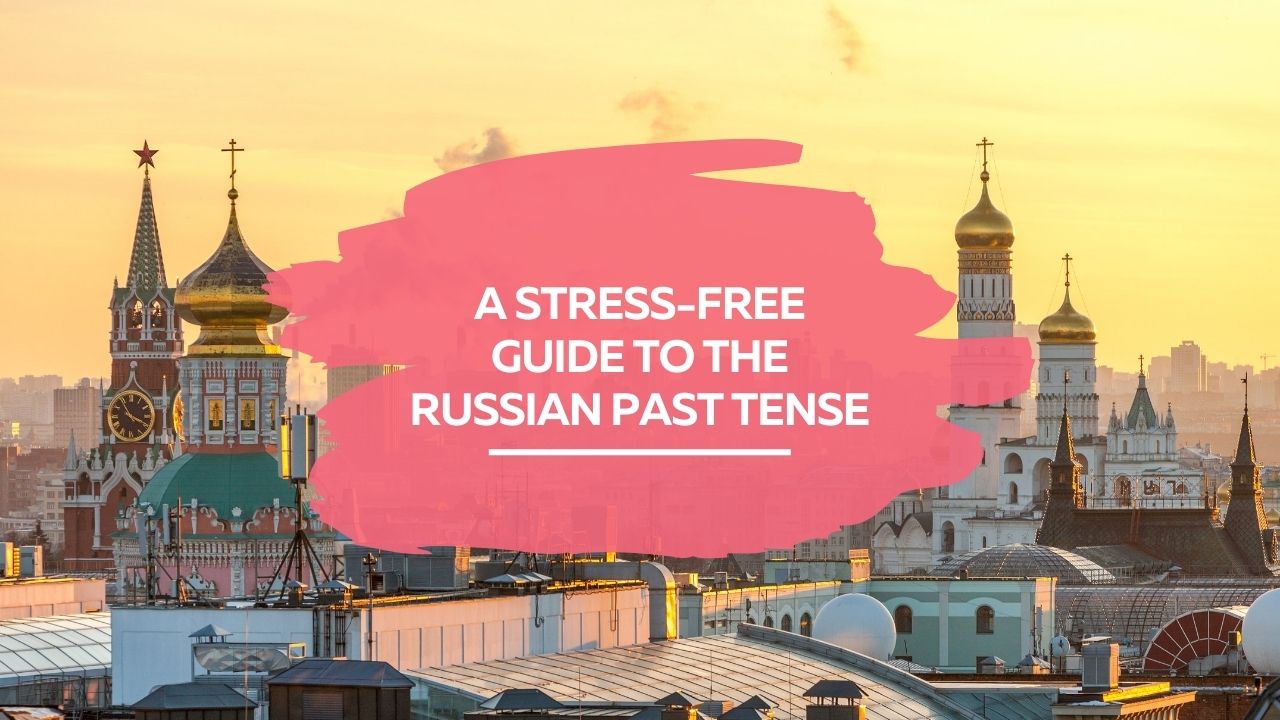 A Stress-Free Guide To The Russian Past Tense

When you learn Russian, you normally start out talking about the here and now, so the Russian past tense isn't your first concern.

In fact, one of the first things you’ll pick up is how to conjugate a Russian verb. But what about what when we talk about the past?

The Russian past tense is its own distinct piece of grammar that you’ll need if you want to talk about anything that’s already happened. What’s interesting is that it works quite differently from the past tense of languages like English, French, or Spanish.

So to help you understand the Russian past tense, this article will cover:

Introducing The Russian Past Tense

While Russian grammar can be tricky at times, the past tense is one topic where English is actually more complicated than Russian. Consider a few of the different past tenses that English uses.

Conversely, when it comes to the Russian past tense, you won’t have to learn any auxiliary verbs (have), conjugations for person (was/were), or irregular past participles (seen).

Instead, you only really have four verb endings to learn. And that’s (mostly) the same for all past tenses in Russian.

Since Russian has a much simpler system of forming past tense verbs, the many forms you see in English are expressed either by adding particle words and prefixes or by context.

In the example below, there are small changes but the structure stays the same.

How To Form The Russian Past Tense

Let’s take an example with the verb сказать (to say).

If you know a verb's infinitive form, forming the Russian past tense is quite straightforward. For verbs with infinitives ending in -ть or -сть, you simply remove the final part and add the past tense endings.

This also makes the past tense easy to spot when you’re reading – and you should be reading stories in order to master Russian or any other language!

There are several verbs which have less predictable endings for the masculine singular form. With these verbs, the  masculine singular ending lacks the -л ending and will instead end in a consonant. Many verbs with infinitives ending in – ти fall into this category.

Occasionally these verbs also have a different vowel in the infinitive and the past tense form. The other forms will have the same endings as more ‘regular’ verbs.

You can combine any of these forms with pronouns as long as they match the gender.

How To Form Reflexive Past Tense Verbs

Since Russian has so many reflexive verbs, you may need to put them in the past tense as well. Thankfully, their formation is simple and straightforward.

As with other verbs, the reflexive endings go at the very end of a verb. So just add -сь or -ся to the end of the past tense.

Russian Aspect – The Completeness Of Verbs

Now that you understand how to identify and form the past tense of a verb, it’s time to talk about Russian verb aspect.

In the Russian language, the completeness of an action is essential information. In English you can say that “I read a book last night” and it’s not clear if you read it to the end or not.

On the flip side, stating the completeness of a Russian verb is obligatory.

In other words, if you say that you read something, you have to specify if you finished reading it or not.

Let’s have an example with the word “read.”

Both of these sentences could be translated into English as “Natasha read a book.” However, they express different end results.

Every verb in Russian is either complete/perfective or incomplete/imperfective. This is usually referred to as aspect (вид). Often the imperfective form will translate as “were doing” or “was doing.”

The  majority of verbs come in pairs known as imperfective and perfective.

So while most dictionaries will define читать and прочитать as “read,” it can sometimes help to think of these as two separate words.

Just remember that the most important thing to consider is whether or not an action is ongoing.

Learning the Imperfective and Perfective Forms

There is no set formula for learning the different forms of verbs, but there are few guidelines.

The perfective form of a verb may be the same as the imperfective, but with a prefix like с- по- про- у-

Of course, Russian is Russian, so there are a few irregularities as well. For example, some verb pairs look nothing alike at all. One of the most common pairs is говорить/сказать (to speak/to say).

As you continue with Russian, you’ll quickly pick up on the different patterns for imperfective and perfective verbs. Additionally, a verb's meaning will help as well.

The Irregular Past With идти

While the ending of past tense verbs are easy to form. The verb идти and prefixed forms of this verb (e.g. дойти, найти, пойти) have an irregular past tense you’ll have to learn separately.

Thankfully these are all based on the same form, so it’s quite simple.

Using The Russian Past Tense For Yourself

Russian grammar has a lot of complexities, but when it comes to the past tense, you only have to learn four endings and you're ready to talk about what you did last week, last year, and last night.

And with a bit of practice, the two aspects of Russian verbs will start to be clear. Just remember to consider whether an action is complete or not and you’ll be set to strike up a conversation!

If you want to make using the Russian past tense come to you like second nature, there’s a solution. When you try the StoryLearning® method and immerse yourself in Russian books and Russian short stories, you master the past tense in no time.

So enjoy talking and as always Удача из удач (best of luck)!