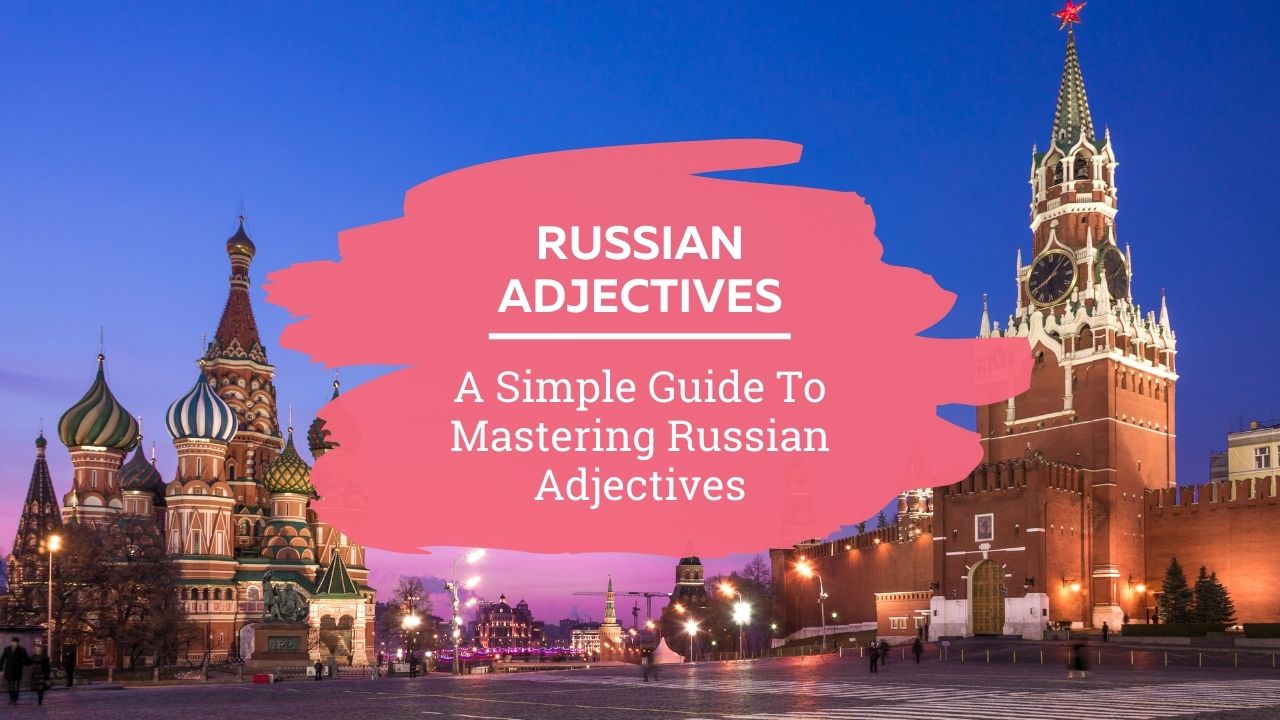 As you learn Russian, do you ever find yourself repeating the same Russian words and phrases over and over again?

Do you feel your Russian is a bit bland and lifeless?

It’s something every new Russian learner experiences. You’ve finally mastered the fundamentals of Russian and you’re able to hold a conversation.

But you struggle to express yourself with nuance and colour. Almost as if you’re speaking “dumbed-down” Russian, rather than the majestic, eloquent language of Pushkin and Tolstoy.

Adjectives are words that add colour and expression to a language, and in this article, you’re going to learn all about how they work in Russian.

As beginner in Russian, most of the key vocabulary words you learn are nouns and verbs.

Nouns tell about who or what is doing something, while verbs tell us about the action taking place.

And you might think that that’s all you need.

But what if you want to really express yourself more clearly?

Think of how much more interesting each of this phrases becomes when you add in an adjective:

Adjectives give us details and describe a particular situation. So, learning Russian adjectives means being able to express your ideas more fully and eloquently. With that in mind, these are words you’re going to want to know to speak Russian like a pro.

Adjectives in Russian take the same role they do in English. They add more description to a noun. Most often, a Russian adjective comes before the noun it describes.

So what makes Russian adjectives different?

Simply put – word agreement. The Russian language utilises a lot of word agreement. Past tense verbs match the gender and number of their subject and present tense verbs conjugate in order to agree with the subject. You find that same kind of word-matching with adjectives.

Russian adjectives will agree with their noun in gender, case, and number.

That means if a noun is masculine, singular, and in the nominative case, then so is the adjective before it.

Just so you know, you’ll often see adjectives presented in their ‘dictionary form’ which means the masculine, singular, nominative form. However, as you already know, the endings will change quite often.

Sidenote: There's also a tiny set of about 20 adjectives that do not decline, but these words are quite uncommon, so you don’t need to worry about them!

The Russian language has two kinds of adjectives – short and long. Short adjectives generally come after the noun, while long adjectives come before. Long are by far the most common, so let’s start there.

Look at the following sentence and see how each time the word новый is used, the ending changes. This is to agree with the case, gender, and number of the noun.

So let’s take a look at the different forms of Russian adjectives with новый as an example.

Adjectives that end in -ого (mas/neu in genitive) are pronounced not as ‘guh’ or ‘goh’, but as ‘vuh’ or ‘voh.’

The table above may seem complex at first glance, but it’s easier than it looks. That's because many of these forms repeat.

In fact, masculine and neuter adjectives are identical to each other in four out of six cases and feminine adjectives use the same ending four times. You might have noticed something else.

There is only one set of endings for all plural adjectives.

That means you only need one set of endings for any plural noun regardless of gender.

The majority of Russian adjectives follow the same pattern as новый and end with -ый -ая -ое -ые.  However, due to Russian spelling rules the ы switches to и after certain letters (г, к, х, ж, ч, ш, щ and ц).

So the word for “Russian” is русский and NOT русскый. Aside from this, these adjectives are the same.

Additionally when the final syllable is stressed, the ending is -ой, as in большой (big) or какой (which). This doesn’t actually change the words very much though.

About forty adjectives in Russian have some ending with soft (мягкий) endings. Most of these end with -ний and are quite common like последний (last) синий (dark blue) and дальний (far).

The ending letters are the same as other adjectives, but the connecting letter is an ‘е’ rather than an ‘о’ and the feminine nominative ending becomes -яя.

While you can use long adjectives in Russian for almost anything, short adjectives have much more limited use. They are only used when saying how something is, was or will be.

What does that mean? In the sentence below, you can see a long adjective великие and a short adjective просты. The long adjective comes before the noun and describes the subject.

However, the short adjective comes after the verb and gives new information about the subject.

Because of their limited use, Russian short adjectives only appear in the nominative case. As such, you only have to learn a few forms.

To form short adjectives in Russian, there are two easy paths.

You simply remove the final letters from the long forms.

You’ll see the short adjectives in generalized saying and expressions.

Russian uses adjectival nouns Субстантивы (substantivy). This shouldn’t come as any surprise though since we do the exact same thing in English.

Sometimes these substantivy are used because a word has been removed. For example, Столовая (dining room) is the shortened version of Столовая комната.

Many substantives are both nouns and adjectives with different, and often related, meanings. For example, let’s look at the word учёный. As an adjective, it can mean “academic” or “learned.” However, it can also act as a noun meaning “scholar” or “scientist.”

The good thing about substantives is that you don’t have to learn any new rules with them. They simply act like adjectives and use the declensions previously mention. In fact, they may be easier than other Russian nouns since their gender is obvious from the ending.

At the end of the day, Russian adjectives aren’t too bad and have the same role as English adjectives.

The main thing is to remember to have the adjective ending match the noun. There are a few tricky parts, but with a bit of practice, you won’t even notice.

So how do you make those Russian adjectives second nature? Well, by applying the StoryLearning® method and immersing yourself in Russian books and Russian short stories.

As you read, you'll start to absorb the Russian adjectives and their endings naturally. Before long, you'll find yourself using them in your own Russian sentences to add a bit of flair.