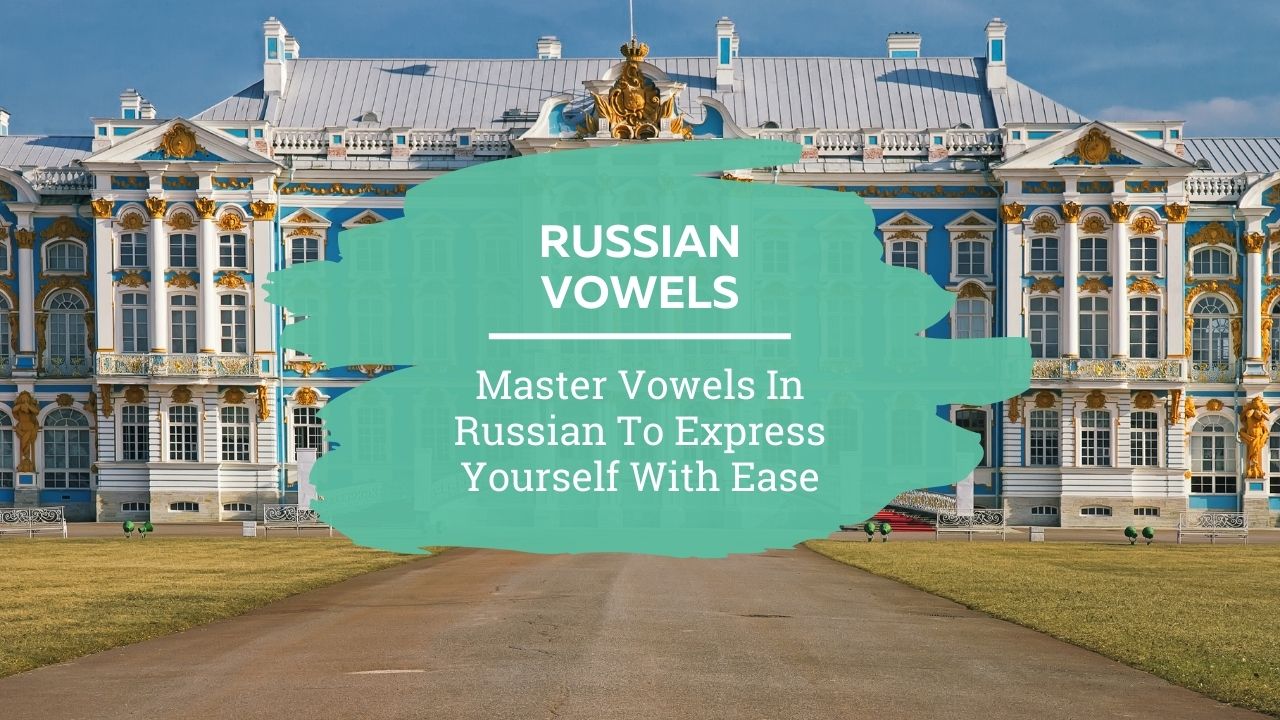 Russian Vowels: Master Vowels In Russian To Express Yourself With Ease

When you learn Russian, one of the first things you learn is that the Russian alphabet has 33 letters and learning these is essential to mastering the language.

Thankfully, vowels are a lot more straightforward than in English, so it’s not as hard as it seems. In this article, you'll learn about:

The Russian language has ten vowel letters, known in Russian as гла́сный.

First, I’ll explain how each of these vowels is pronounced when stressed.

The most difficult Russian vowel for English speakers to learn is ы since there’s no real equivalent. It sounds like something between the short ‘i' of “it” or “big” and the long vowel of “glee.” This Russian vowel will definitely need the most practice to master.

The vowels я е ё and ю and interesting as they mirror the vowels а э о у but with a ‘y’ sound at the beginning. In Russian, this sound is called a ‘yot.’

When it comes to learning Russian vowels, stress or ударе́ние is the greatest hurdle to overcome. Several vowels are pronounced differently depending on whether they are stressed or not.

Russian is actually a lot like English this way. Consider how “a greenhouse” and “a green house” have different stress patterns as well as distinct meanings.

Russian works in much the same way, so vowel stress of a word can change both pronunciation and meaning.

So how do you learn stress rules? Well unfortunately…

There are no set rules for Russian stress patterns

While that may sound difficult, don’t be discouraged! There are a lot of guidelines to help you. Moreover, Russian vowel stress is a lot less arduous than it may first appear. Once you become familiar with a few patterns, you start to get an intuition for Russian stress.

To explain this better, I’ll first go over the easy and straightforward vowels. After that, we’ll explain the trickier vowels. That way you can master Russian vowel stress in no time.

Here’s the good news. The majority of unstressed vowels in Russian are the same as their stressed counterparts, but just a bit shorter and with less emphasis.

The letters и and ы when unstressed are simply shorter than when stressed, but there is no real sound change.

The letters у and ю are virtually the same whether stressed or unstressed as well. The only difference is that some speakers will round their lips a bit less in the unstressed version.

The vowel э may sound a bit more like the ‘i' in “it” or “kit” when unstressed.

The vowel ё only occurs as a stressed vowel. So you don’t have to worry about it being unstressed.

Now onto the more difficult Russian vowels – а, я, е and о. None of these are terribly difficult, but they do take a bit of practice.

Let’s start with the two yot sounds е and я. Both of these tend to move from full sounds to something like the ‘yi’ in “yip” but with the lips a bit more rounded.

These two vowels also turn into a schwa sound in some situations. A schwa is the ‘uh’ vowel in words like “about”, “undo” or “comma“. With the vowels я and е, this happens regularly after the vowel и.

When unstressed, the letter ‘a’ is pronounced as either ‘ah’ (as in father) or as a schwa. Most often, it’s reduced to the schwa sound (uh). This is particularly common at the end of words.

Of all the Russian vowels, the letter ‘О’ undergoes the most changes depending on stress. When stressed it sounds like the ‘o’ in “go”.

However, when unstressed, the ‘O' may be pronounced as either ‘ah’ (as in father) or the schwa/uh sound. Often, it’s pronounced as ‘ah’ when it’s before the stressed vowel.

And if a word ends with an unstressed ‘oh’ it often is pronounced as a schwa. That may sound confusing, but with a bit of practice it will quickly feel natural.

You can see/hear all three of these o’s in the words молоко, хорошо, большого and осторожно.

While stress in Russian might be unpredictable, the rules about it remain quite consistent. The only exceptions you should know are loanwords.

For example, these may keep full o’s even when they're not stressed. Thankfully, such words are easy to spot since they are often cognates with English terms.

In addition to the vowels, the Russian language also has the semivowel й. This letter functions much like the English ‘y’ acting sometimes as a vowel (baby, byte) and sometimes like a consonant (yin, yang).

Most of the time, the letter й appears at the end of a syllable after a vowel and adds a ‘y’ sound to the end.

The semi-vowel й is very rarely used at the beginning of a word or syllable. When this does happen, it’s almost exclusively with loanwords.

Now you should have an overview of all the Russian vowels. Just remember that the difference between stressed and unstressed vowels may seem tricky at first, but you’ll develop an intuition for it over time.

And to help you along in that process, make sure you're listening to plenty of Russian. You could watch Russian movies on Netflix for example. You can also apply the core of the StoryLearning® method and listen to short stories in Russian.

Whatever way you prefer to listen to Russian, regular immersion is the key to mastering Russian pronunciation and Russian vowels.