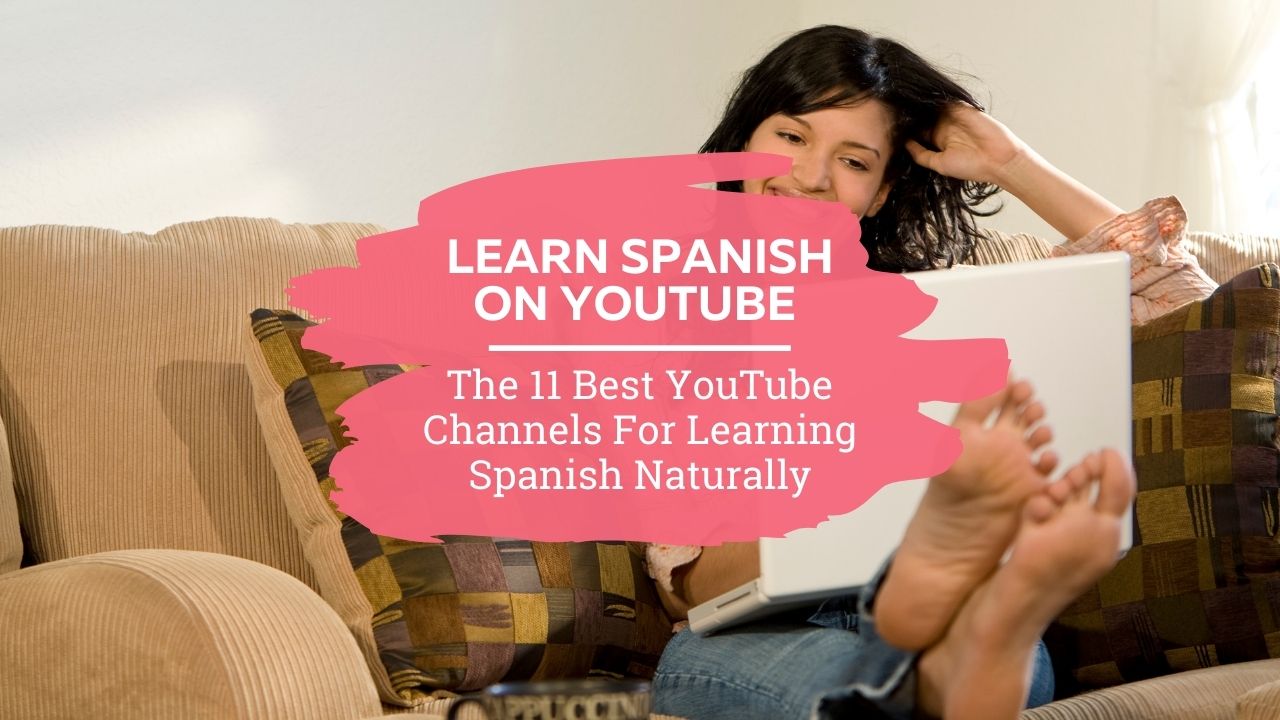 But learning Spanish on YouTube can come with its own challenges — there seems to be no end to the channels to choose from, and they all feel different but similar enough so you’re confused about the best option.

But don’t worry, I'm here to help! Luckily, there are 11 Spanish YouTubers – or at least people who “youtube” in Spanish – who I really like, and can help you learn Spanish faster and in a natural way.

You can watch me share my 11 favourite Spanish YouTubers in the video above. Or keep scrolling to read the blog post version of the video. You can also get a quick overview of some of my recommendations in the infographic below. Check out the full post though for a preview of each channel's content.

Dustin is a bilingual American who learned Spanish fluently due to an intense passion for Latin culture.

This guy is seriously full of energy and I challenge you watch his channel and NOT want to drop everything and study Spanish!

Dustin used to present a travel show on TV in Argentina which is quite cool. And on his YouTube channel he  takes you to cool places – rock climbing, sheep shearing in Patagonia, trying out food from different Latin American countries…

Even to watch the NBA!

If you follow Dustin, you’ll get some great exposure to Argentine Spanish, and you can even learn about those super expressive Argentinian hand gestures!

This is a super fun one – especially for beginners.

My favourite is the one where he buys a bag of insects and eats them in front of you.

If you can concentrate on what he’s saying, you’ll learn some cool Spanish words describing taste and texture!

Well, not the ones he just ate, of course!

Now these guys are a team from Barcelona who interview people on the streets all over Spain and Latin America.

So you get to observe real conversations with random strangers.

For example, in one video they ask people: “Is Mexico really unsafe?”

I also like that the translations on screen are verbatim – you hear exactly what the interviewers hear.

Maria is a teacher from Seville who makes you feel like you’re having a visit while she chats casually about life.

You’ll need to be at least at intermediate level to keep up. But she’s excellent and has unique content ideas…

I love the one where she tells you about a dream she had.

And this is just the kind of immersive technique I’m always telling you to look out for!

But time for some exploration with…

If you’re a beginner in Spanish who’s also into adventure, travel and food, then I think you’ll love these guys!

Jim and May are a gringo-Mexican couple who love to explore beautiful destinations while teaching Spanish.

They’ll inspire you to travel while teaching useful things like how to order in Spanish at a restaurant, how to ask a stranger for directions, or even how to find the best swimming cenotes in Mexico.

One very useful thing they do is conversation demos, like the one where they act out the EXACT WAY you should greet different types of Spanish people you meet – a taxi driver, a doctor, a friend…

But let’s check out some fun and learning from Columbia…

Maria and Cody do little skits to help you get over the fear of actually using Spanish in your real life.

And they can be pretty entertaining! For example…there’s the skit where they pretend to meet in a noisy bar and attempt the fine art of making small talk.

And after that, you’ll watch how a girl cleverly deflects unwanted attention from a weird guy.

I told you – useful stuff!

Since these are authentic conversation activities, the channel is a winner in my book!

Our next YouTuber is a solo act who I like because he uses stories to teach.

Whatever your Spanish level, this guy has something for you!

His name is Salo and he takes everyday life stories and turns them into listening and reading experiences.

And it’s all about context with him.

So you’ll hear and read a story or conversation- first in slow Spanish, followed by a brief explanation, and then you’ll hear the whole dialogue again at natural speed.

Like the conversation above, where two guys are chatting about adopting a pet.

Now, we had some skits before, but these two young Mexicans LOVE their acting videos…

Juan and Pamela use props to act out scenes that are awesome for beginners in Spanish.

You can watch them meeting up in the park or some other cool place to chat about a weird thing that happened, or something that’s bothering them.

For example, there's the one where Juan’s hand is all bandaged up and he explains the stupid accident to Pamela.

I love both of their beautiful enunciation when speaking and the clever way they work important grammar points into the dialogues.

They even created a mini-series about a mysterious box that appears in their apartment.

But you’ll have to follow them to check it out!

Now here’s a gentleman who has the wisdom of years…

Juan Fernandez is from Granada and his videos are all about playing, having loads of fun and doing interesting things.

He creates VERY engaging content for all levels. And he’ll crack you up!!

It’s very hot, but he keeps waiting for the girls to pass so he can take off his shirt – pretty funny!

Plus you keep hearing the same words and phrases over and over and before you know it, you’ve learned a bunch of Spanish beach phrases – in context, with visuals and captions…

Fantastic! Juan is really good at this.

I still have two more cool Spanish channels for you, so keep reading!

With a great sense of humour!

With Sergi, you’ll hit the streets of Barcelona (and other places) and learn a lot of useful expressions while having a laugh.

I mean, you’ve gotta love a Spanish teacher who makes a video about how to be a good mafioso!

Well, we’re finally at number 11 and this one, you may be familiar with…

Now StoryLearning Spanish is actually a really popular daily Spanish immersion podcast, and you can find it wherever you get your podcasts

But we’ve recently started the StoryLearing Spanish YouTube channel, and I’ll be honest, I’m not totally sure yet exactly how this channel is gonna work.

So that’s one reason why you should check it out and subscribe right now, and turn on notifications too, so that you’re the first to know when it actually goes live

But look, if you’re interested in learning Spanish then you really have to check out this story…

It’s the story of a girl who grew up in a tiny village in the UK, but somehow taught herself flawless Spanish.

It’s a really eye-opening story that even involves some deception, and a spot of romance…

Whether you prefer something slow and structured, or a deep dive into the culture, you've got everything you need to start learning Spanish for free from home.

These YouTube videos are a great way to immerse yourself in the language, without getting hung up on grammar and vocabulary details. Especially the videos that are 100% in Spanish.

In fact, that's exactly what I did when I learned Italian from home in 3 months. I immersed myself daily in Italian material that interested me.

That way, I picked up the grammar and vocabulary that I needed in a natural, organic way, without spending hours doing textbook or grammar exercises. This is how the StoryLearning® method works.

So why not try that immersion method yourself with these YouTube channels?