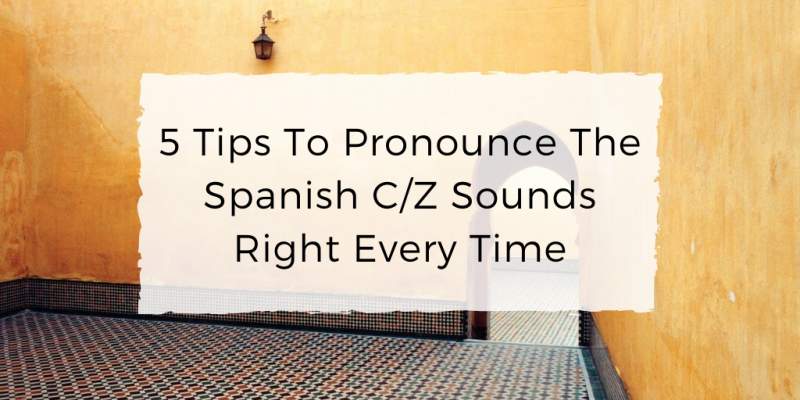 As you learn Spanish, you've probably noticed that Spanish pronunciation is one of the easier parts of the language.

For starters, Spanish pronunciation is consistent. Once you learn the sounds each letter makes, you can pronounce (and probably spell) just about any word in the Spanish language.

Finally, most consonants make the same basic sound as they do in English, though you may need to practice softening certain sounds to improve your accent.

That's not to say that all letters and combinations will be easy for you.

RR, J or jota , and LL are notoriously difficult for English speakers studying Spanish. Two other Spanish letters can give you problems too: C and Z.

In this article, you'll learn:

Because this post includes the different ways C and Z are pronounced around the Spanish-speaking world, you'll also learn about:

By the time you've finished reading this post, you'll be ready to confidently pronounce C and Z in Spanish no matter where you live.

By the way, if you want to master more of the tricky aspects of Spanish, so you can get off the intermediate plateau and sound more authentic, I recommend Fluent Spanish Academy.

If you prefer to learn through video, just click to view this article in video format.

1. How To Pronounce The Hard C In Spanish

In Spanish, C makes two basic sounds: a hard C and a soft C. For most English speakers learning Spanish, this is a familiar concept. It feels intuitive because English works in the same way.

In English, “cat” and “celery” do not have the same starting sound, even though they both start with C. “Carrot”, “creative”, and “coach” are hard Cs, while “city” and “celebrate” start with a softer sound.

In Spanish, as in English, C makes its hard sound (like K) when it comes before A, O, or U:

C also makes a hard sound when it comes before the consonants L and R:

In all of the words listed above, the C makes a hard sound (like “can” and “cup” in English).

Things get more complicated with the soft C because the Spanish-speaking world is divided on how it should be pronounced.

2. How To Pronounce The Soft C (And Z) In Spanish

As in English, C makes a softer sound when it comes before the vowels I or E in Spanish.

In English, that gives us words like “city” and “centimeter”. In Spanish, the soft C appears in words such as these:

Z is also pronounced in the same way, regardless of what letters accompany it:

But exactly what sound do the soft C and Z make? That depends on where you are in the Spanish-speaking world.

Hold that thought – I'll talk more about this in a bit.

3. Other C Letter Combinations In Spanish

Most of the time, Spanish Cs make either the hard or soft sound. But there are a three other combinations that produce completely different sounds.

When C comes before U and another vowel, it makes more of a Q sound:

C+H in Spanish is the same as in words like “cherry” and “choose”. This is yet another similarity that makes Spanish pronunciation easier for English speakers:

Depending on which part of the Spanish-speaking world you are in, however, the CH may have a softer sound (closer to a short SH), although that is more a matter of accent and not a separate pronunciation style.

There are no cases in Spanish where C+H makes a K sound (as happens in English with words like “architect”).

This can cause some confusion at first with words like archivo (archive), which you may want to pronounce with the K sound.

Don't be fooled! Simply pronounce all C+H words the same way in Spanish.

You may notice that in some cases, Spanish versions of English words are pronounced with a K sound (instead of CH) are spelled with Qs instead. Arquitecto (architect) is one such case.

Do you recall when I said that pronunciation is made easier by the consistency of Spanish pronunciation rules? Double Cs provide a great example of this.

As a result, a double C sounds like K+TH in Spain.

In parts of the world where the soft C makes an S sound, however, that K+S combination ends up sounding very similar to X (like “accident” in English).

There are lots of misconceptions and inaccurate legends about how and why a soft C is pronounced differently in Spain than other parts of the world.

One of the most commonly repeated stories is that an early Spanish king spoke with a lisp, causing the entire country to mimic his pattern of speech.

Not only is there no evidence of a Spanish king speaking with a lisp, but the soft C/Z pronunciation isn't a lisp at all!

In fact, the way that most of Spain pronounces the soft C is the original pronunciation. It's simply a method for distinguishing between S and C.

In Chile, for example, casar (to marry) and cazar (to hunt) would sound exactly the same. On the other hand, in Spain, the two words have distinct pronunciations.

In fact, when talking about the different ways to pronounce the soft C in Spanish, distinción describes Spanish speakers that make a distinction between C and S.

When you pronounce the soft Spanish C or Z like TH, you're speaking con distinción.

The Soft C And Seseo

Pronouncing soft C like an S, on the other hand, is called seseo. Although there's a chance for confusion since there's no way to tell the difference between S and a soft C in spoken language, context is usually enough to clear up any misunderstanding.

So if speaking con distinción is the original standard for pronunciation, why is it limited to Spain?

What we think of as standard Peninsular Spanish (what is spoken in Spain) is really “Castilian” Spanish, which was spoken in the ancient kingdom of Castile. When Ferdinand II of Aragon and Isabella I of Castile united Spain in 1479, Castilian Spanish became the official language of Spain.

Most of the Spaniards that traveled to the Americas in the fifteenth and sixteenth century, however, came from Seville (in the southern part of Spain). One difference between Spanish spoken in the southern regions of Spain at the time was—you guessed it—seseo vs. distinción.

Many of the differences between Spanish spoken in Spain and Spanish spoken in the rest of the world stem from the fact that the two regions did not interact much after the original migration of explorers from Spain.

That's why seseo is the predominant style in Latin America while distinción remained the norm in Spain.

There is a third pronunciation style known as ceceo in which S is also pronounced like TH. This is much less common, but it does crop up in smaller regions of Spain and Central America.

5. How Should You Pronounce The Spanish C/Z Sound (And Why)?

So how should you pronounce the soft C and Z in Spanish?

Honestly, there is no “best” pronunciation, though I do suggest you try out both.

You may find that one pronunciation is easier for you to pronounce (or understand), especially if you've spent a lot of time with hispanohablantes (Spanish speakers) from one part of the Spanish-speaking world.

As you find opportunities to travel, you may find yourself switching back and forth between distinción and seseo to be better understood and sound more like a native speaker…no matter where you are!