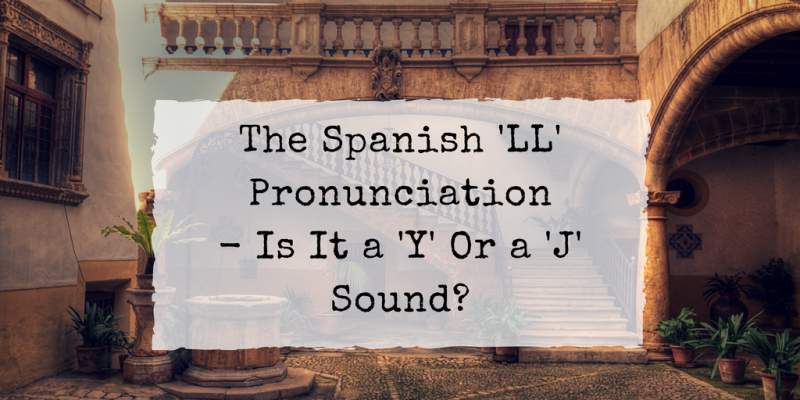 The Spanish LL Pronunciation: Is It A ‘Y’ Or A ‘J’ Sound?

When you first started to learn Spanish, you were probably taught that the Spanish LL pronunciation was the same as the letter ‘y’ in English.

And that is true… sometimes.

But, if you've already been learning Spanish for a little while, I bet you’ve discovered that’s not always the case.

Maybe you're wondering why ll sometimes sounds like ‘y’, but other times seems to sound like an English ‘j’ instead.

Or perhaps you’ve been to Argentina or Uruguay and you could swear they’re actually making a ‘sh’ sound when they use the Spanish ll.

So which of these sounds is it?

Well, believe it or not, there are actually four different ways to pronounce the Spanish LL sound in words like llamar and lluvia around the Spanish-speaking world.

And in this article, you’re going to learn about each one of them.

For a quick walkthrough the different ll sounds in Spanish, you can check out this video from my Fluent Spanish Academy YouTube channel. Or if you prefer a more thorough explanation of the Spanish ll or just prefer to see it in print, scroll down and read on!

By the way, if you want to learn Spanish through stories, not rules, my top recommendation for language learners is my Uncovered courses, which teach you through StoryLearning®. Click here to find out more and get a free trial of the method.

The Spanish LL Sound – A Background

As you’ve probably realised, ll is very common in Spanish!

Rather being a separate letter in the Spanish alphabet, ll is what’s known as a digraph.

We also have digraphs in English such as sh, th, and ck.

But, when you’re learning to speak and understand Spanish, you probably care more about how to pronounce this sound than what it’s called!

So let’s get to that…

The confusing thing about the Spanish ll is that there are actually four different ways to pronounce it and all of them are correct… somewhere in the world!

To fully understand what I mean, let me break each variation for you, one-by-one:

Just as you learned in your beginner course or textbook, ll most often sounds like the English letter ‘y’ as in the words “yellow” and “yes”.

This is the way ll is pronounced in Spain, parts of Mexico, and most of Central and South America.

When you are first learning to speak and read Spanish, this is the easiest pronunciation to use. Simply magine replacing any ll with a ‘y' and that’s it!

For example, you would pronounce lluvia (rain) as “yuvia” or se llama as “se yama”. Here are some other common ll words and their pronunciations:

This is the most common pronunciation worldwide and it’s also the way most Spanish teachers will teach new Spanish speakers to pronounce ll.

Ll is taught as ‘Y’ for good reason: since it’s the most common pronunciation, it’s the most useful way for Spanish learners to learn to speak and understand the language quickly.

By mastering nothing more than this pronunciation of ll, you will be readily understood by the majority of hispanohablantes (Spanish speakers) around the world.

That said, while knowing the standard ll = ’y’ pronunciation is a great start, if you’ve done much traveling or know many native Spanish speakers, you’ve probably already heard two other common pronunciations of ll.

Let’s consider those next…

The second most common pronunciation of ll is similar to a soft ‘J’ sound in English.

This variation can be heard regionally around the world rather than in any one particular country.

It's important to note that this soft ‘j’ is not quite the same as the hard, fast J of English words like “jam”.

In fact, it’s almost closer to the ‘S’ in the English word “treasure” but stretched out a bit longer: jjjorar (llorar) or jjjave (llave).

Another way you may hear ll pronounced is similarly to a ‘sh’ sound in English.

In this variation, tortilla becomes “tortisha” and llamar is “shamar”.

Ll as “sh” is virtually exclusive to the Río de la Plata region of South America, which includes Argentina and Uruguay.

If you’ve ever spoken to someone from Argentina, you’ll probably have noticed this sound before.

Many things about Spanish are different in the Rio de la Plata region. In fact, there is a word (Rioplatense) that describes that region’s Spanish.

In addition to pronouncing ll differently than the rest of the Spanish-speaking world, Rioplatense Spanish has its own special conjugation for the singular tú forms of verbs and lots of distinct vocabulary.

The Ll as ‘sh’ is probably the most distinct variation in the Spanish speaking world and it can be very confusing for new Spanish speakers who aren’t aware of it.

But now that you know it exists and how it sounds, you won’t have much of a problem!

In truth, unless you will be living in either Argentina or Uruguay, you probably don’t need to worry about pronouncing your ll this way.

But, no matter where you learn and speak Spanish, it’s a good idea to be familiar with this pronunciation anyway so you won’t be caught off guard if others use it when speaking to you!

Traditionally, the letters ll and y had different pronunciations in Spanish.

However, nowadays, in most Spanish-speaking countries, the ll in pollo is pronounced the same way as the y in arroyo.

This is true with any of the three variations of ll we’ve learned about so far.

In a few parts of the world, however, ll and y have maintained slightly different pronunciations.

The distinction might be difficult to hear unless you’re listening for it specifically, but ll is actually pronounced as a combination of the letters ‘l’ and ‘i’, as in the English word “million”.

If you are familiar with Italian pronunciation, you can also think of it as the “gli” sound used in words like famiglia or svegliare.

Well, instead of pollo, you would hear “polyo”, while arroyo would remain “arroyo”.

This may seem pretty strange to you as a Spanish learner but it does have one major advantage – it makes it easy to distinguish between words that contain ll and words that include a y instead, which helps when learning to spell Spanish words correctly!

This pronunciation (sometimes known as lleísmo) is especially common in isolated Spanish-speaking communities, such as among Spanish speakers in the Philippines and in parts of Colombia, Paraguay, Bolivia, and Peru.

Which Spanish LL Pronunciation Should You Use?

So which Spanish ll pronunciation is the best?

To be honest, there is no best or worst way to say ll.

You may find that one pronunciation is easier or comes more naturally to you. But more likely, the ll you choose will depend on where you live, the people you speak with regularly and your reasons for learning Spanish.

In the end, it doesn’t really matter which Spanish ll sound you choose to use. After all, using and enjoying your Spanish is far more important than focusing on any specific variation!