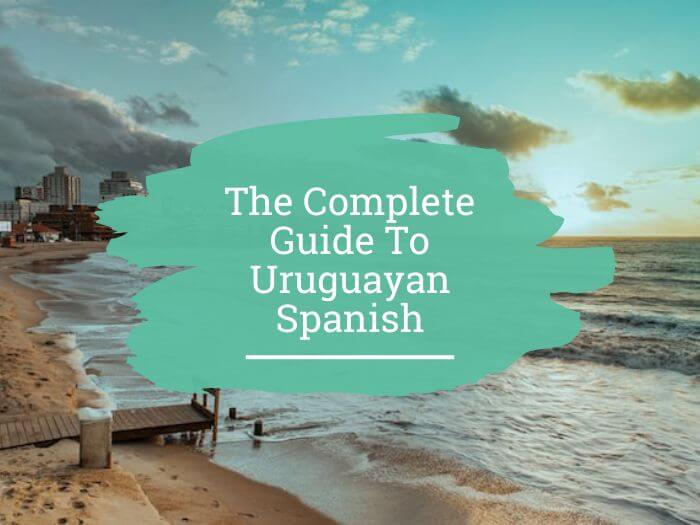 The Complete Guide To Uruguayan Spanish

If you're learning Spanish, then you might know that it's the official language in 21 countries. So it’s no surprise that there are a lot of accents, local slang, and many differences in vocabulary across the Spanish-speaking world.

Uruguayan Spanish is no exception. This variety has its own unique features, such as the use of the voseo atípico (more on what that means in a second!), or the pronunciation of “y” and “ll” with the sound sh.

In this article, you'll get a complete guide to Uruguayan Spanish, so you can connect better on your travels, or with Uruguayan friends and family. Are you prontos?

An Introduction To Uruguayan Spanish

Uruguayan Spanish, as its name indicates, is the Spanish spoken in Uruguay, a country with about 3.5 million inhabitants; most of them (1.3 million) live in its capital, Montevideo.

This makes Uruguay a country where the capital has a strong cultural, social, economic, and linguistic influence. However, that doesn’t mean that everyone in Uruguay speaks the same way!

As you've seen, the Uruguayan Spanish is not the same throughout the country. However, there are some characteristics that you'll find in every region:

Uruguayan Spanish is a variant of Rioplatense Spanish; in other words the Spanish that is spoken on both banks of the Río de La Plata. These territories are: to the west, Argentina —in particular, Buenos Aires and Patagonia— and, to the east, all of Uruguay.

Rioplatense Spanish is extremely similar and, as we have said before, there's little chance that a foreigner would be able to tell the Uruguayan accent from the accent spoken in Buenos Aires. But… Why does this happen?

Well, you need to know a bit about Uruguayan history! In the second half of the 18th century, the current territories of Argentina and Uruguay were reunited in the Viceroyalty of the Río de La Plata under the Spanish Crown, with its epicentre in Buenos Aires.

After independence from Spain, the troops of Buenos Aires conquered Uruguay, although in the end the Uruguayans regained control of Montevideo. All this has made both banks of the Río de La Plata share many cultural elements, including a very similar accent.

But, beyond the obvious phonological similarities in Uruguayan Spanish and the Spanish of Buenos Aires, there are a lot of vocabulary differences!

Next, you'll discover some Uruguayan words and expression, and their equivalents in the Rioplatense Spanish of Argentina and the Spanish used in other countries.

There are also many words in Uruguayan Spanish that come from the Italian immigration that happened in South America between the 19th and the 20th centuries. That's why you'll often hear words like laburo (meaning “work”, from Italian lavoro) or pronto (meaning “ready”, from the Italian pronto).

In Uruguay there are some typical expressions that you’ll hear them all the time if you go there!

Let’s see what they are:

Perhaps the quintessential Uruguayan phrase. Vamo’ arriba means something like “Come on!”, and is used, normally, to encourage someone or to express happiness about something:

This popular Uruguayan expression means that something has no logic or makes no sense. The gollete is the neck of a bottle or bottleneck, so you're literally saying that something “has no neck”!

Armar relajo means “to make a mess”. There are other variations of this expression, such as hacer lío or hacer un desastre, although you’ll definitely only hear armar relajo in Uruguay.

Let’s look an example with this expression:

It’s a phrase that Uruguayans use when they want to warn that something surprising is about to happen. The origin of this expression dates back to the 1940s in Buenos Aires, Argentina.

Catalina was a young trapeze artist who had lost her entire family in accidents at the circus where she worked. Every time she went on stage, the audience yelled at her “¡Agarrate, Catalina!”. Let’s see an example:

By the way: In Uruguay, there's a murga band called Agarrate Catalina (murga is a typical Rioplatense music style) and it’s characterized by lyrics that mix humour with protest. You should definitely have a listen!

This curious expression means “Mathematically, we have an opportunity”, and its origin comes from football (this sport is so important in Uruguayan culture!), more precisely from the times in which the Uruguay national football team was classified in the World Cup.

However, the expression has become so widespread, and now it’s used to refer to the fact that there are certain possibilities of achieving something, although few:

Can you think of reasons to visit Uruguay?

There are plenty: beautiful beaches —its beach Punta del Este is one of the most famous ones in the world—, a cosmopolitan and safe capital —Montevideo is the capital with the best quality of life in all of Latin America— and, above all, people are very friendly.

So, if you go to Uruguay, and we don’t blame you if you want to, you already know the most common expressions and how to understand people's accents. ¡Vamo’ arriba!

And of course, if you want to learn any variety of Spanish in a fun and effective way, make sure you apply the rules of StoryLearning® and read stories in Spanish.