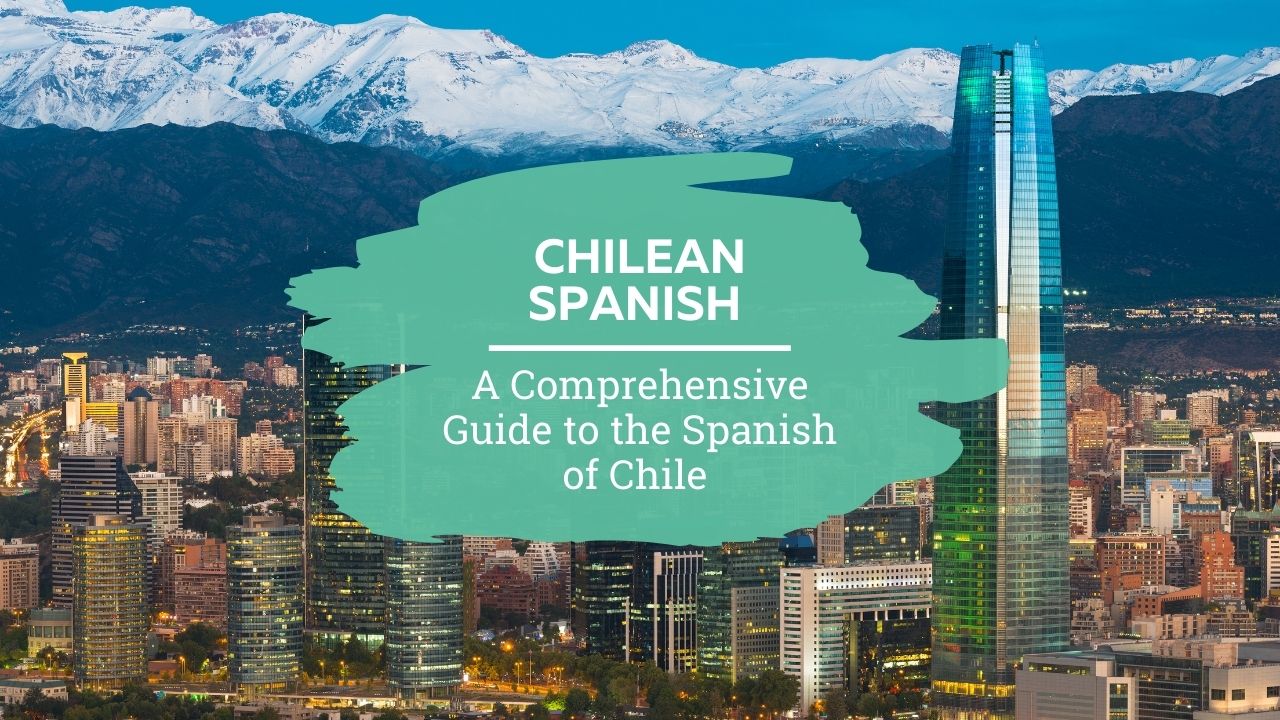 A Comprehensive Guide To Chilean Spanish

If you're learning Spanish, you're probably aware that it's a diverse language. Spread all over the world, it seems like every country that speaks it adds its own flavour to it —and Chilean Spanish is no exception!

The Spanish of Chile is unique in many ways: it has its own pronunciation, its own vocabulary, its own very particular intonation, and even a few grammar quirks. All of this makes it unique, and a key part of Chilean culture.

You may be planning a trip to Chile soon, or you may just be curious about the many Spanish varieties in the world (I know I am!). Maybe you are toying with the idea of studying Spanish and you’re dipping a toe in the water.

Anyways, here you’ll find a brief guide to Chilean Spanish, with all the basics you need to know!

Spanish is not the only Chilean language. Although, it is by far the most popular-99% of the population speaks it.

But, as in many other Latin American countries, there are also indigenous languages, like Aymara and Quechua in the north, and Mapudungun in the south.

Even though these languages are not very widespread, they have had a very distinct influence on Chilean pronunciation and vocabulary.

Many Chilean words, like pololo (boyfriend), are in fact of indigenous origin (in this case, Mapuche). That said, let’s get into it!

Have you ever heard a Chilean speak? If you haven’t, you may want to hear a bit of this interview with the Chilean musician Mon Laferte. Here, you’ll notice the characteristic Chilean musicality that makes their intonation so unique.

Most Spanish dialects are divided by how they pronounce two letters: the ll and the z.

If the ll and the y are pronounced in the same way, like Chileans do, the variation is called yeísta; if they don’t, they are called lleístas.

In a similar way, in Spain, the s and z are pronounced differently, but most Spanish dialects are seseantes, which means that the z and the s are pronounced in the same way.

So we can say that Chilean Spanish is yeísta and seseante. But that’s not so unique after all. The distinct sound of Chilean Spanish has more to do with three phenomena:

There are many quirks to the Chilean language. You’ll find, for example, that Chileans love to repeat their personal pronouns.

That’s how Voy a irme (I’m going to go) is, more often than not, said as Me voy a irme. In the same way, La vine a buscar (I came to pick her up) is likely to appear as La vine a buscarla.

But there are more complicated aspects to Chilean Spanish grammar, particularly around verbs.

In that way, Chileans normally use tú and ustedes. But they use them in a very particular way.

So we now have the Chilean verbal paradigm: yo, tú, él/ella, nosotros, ustedes, ellos/ellas. But let’s see how they conjugate verbs in the present tense, compared to standard Spanish.

Below you'll find a table with caminar (to walk):

What happened there? Well, Chileans have a special way of conjugating verbs in the second person singular. Comer (to eat) will be comís and not comes; vivir (to live) will be vivís and not vives. I know it’s strange, but hey, that’s what makes them so special!

There is an explanation for this (kind of). Chileans use the pronoun tú, but they conjugate verbs as if they used the pronoun vos. This makes sense, if you think about it.

Let’s see how it works in yet another table:

Can you see how standard voseo tends to accentuate the final syllable? Add a little pronunciation trickery to that and you’ll have Chilean Spanish!

Chileans also have a very distinct imperative form. Do you remember imperatives? It’s the Spanish mode you use to give orders.

If you travel to Chile, you’ll often hear these kinds of variations for the second person singular:

This has an explanation too: Chileans tend to replace the standard second-person imperative form for the third-person present indicative form.

We finally got to the juicy part: Chilean slang. There are many—believe me, many—words and expressions that are typical to this region.

I could not possibly list them all in this article, but I made this short list for you to begin with. Enjoy!

Al tiro means, literally, “to the shot,” Chileans use it to mean “right away.”

Chileans have a lot of ways of saying that something is good or nice (they are very enthusiastic, it seems).

You can say, for example, that something is bacán, but you can also use filete, la raja, o la zorra. If you say El concierto estuvo bacán/filete/la raja/la zorra, you’ll mean that “The concert was awesome.”

Chileans use this word all the time. It means “Do you understand?”, but in a very economic and synthetic form.

It’s difficult to understand what chucha means in Chile, because it’s a multifaceted word.

You could say that it’s basically a noun used to indicate surprise or exclamation. If you say ¡Chucha, hace calor!, you’ll mean “Wow, it’s hot!”. But you could also say ¡Hace más calor que la chucha!, which can be translated as “It’s hotter than the sun!”.

If you say Él está curado (pronounced curao), you’ll mean “He is drunk.” Which is kind of funny, especially if you consider that curado alone means “healed.”

A pato is a duck. Ok, that’s easy. But what does estar pato—or andar pato—mean? Well, it means that you’re broke, without money. It may sound strange, but hey, ducks don’t really have money.

Fome is one of the most widespread Chilean words. It means “boring” or “lame.” If a party is fome, you don’t want to go there!

Guata means stomach or belly. This is one of the many words that come from Mapudungun, the Mapuche language; in Mapudungun, huata means precisely that, stomach.

Weón was originally an insult used to indicate that someone was dumb or annoying. However, now it is so widely used that it has lost its negative connotation—in most cases—and it generally means just “dude” or “guy.” Chileans say weón all the time!

Mandarse un condoro can be translated as “to make a mistake.” This expression may seem strange—what is a condoro, anyway?—, but all can be explained by its origin.

Chile’s most famous cartoon character is Condorito, a small condor. He’s a clumsy guy who makes many mistakes, so condoro is now a synonym for error.

Po is the ultimate filler for Chileans. You’ll hear it mostly at the end of phrases, and it means… Well, it means nothing.

It’s a derivation of the standard pues (a Spanish filler connector that can also mean “then” or “since”), but Chileans use it mostly just to punctuate the end of the sentence.

The literal translation for vender la pomada will be “to sell the pomade,” That’s fine, but, what does that mean?

Well, it’s mostly used to indicate deception or cheating. If you say Me vendieron la pomada, it means that someone scammed you!

Chileans say wea all the time: it's probably one of the most common nouns in Chilean slang. And that’s because almost anything can be a wea.

Do you want someone to pass you the salt? You can say Pásame la wea. Has your car broken down? Just say Se me descompuso la wea. Did you just forget your wallet in the restaurant? Well, that’s easy: Me olvidé la wea en el restaurante.

In most Spanish-speaking countries, ya means “now” or “already,” depending on the context. But in Chile, many people use it to say “yes,” especially as an answer to yes-no questions.

It’s easier to understand if you see it in a dialogue:

The Basics Of Chilean Spanish

You now know the basics of Chilean Spanish! It’s a curious dialect, right? It has a very characteristic sound and many unique words.

But it is only one of the many varieties of Spanish you can find all over the world. After all, since almost 600 million people speak it, you’ll expect some diversity among them!

Many people are intimidated—or bored—by the usual language courses, which are full of grammar and repetition.

But no matter which variety of Spanish you're learning, including Chilean, when you apply the StoryLearning® method, you can learn in a fast, fun and effective way, thanks to stories, not rules.