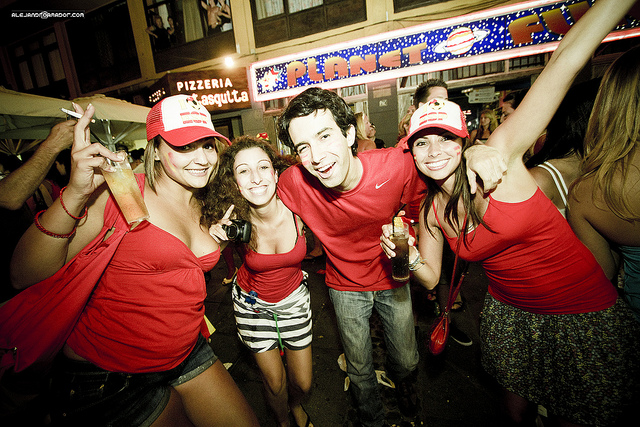 How To Learn The Spanish Of The Canary Islands

You might not know where the Canary Islands are.

Don't worry, though… you're not the only one!

You also might not know that the Canary Islands belong to Spain, and that Spanish is the local language.

It's actually a topic close to my heart, because I originally learnt my Spanish with Canarians, which is where I got my slightly unusual accent.

That's why when Holly Mantle wrote to me with an idea for a guest post about the Spanish from the Canary Islands, I was thrilled!

I've been wanting to write about this topic for a while, but she beat me to it! Take it away, Hollie…

Wait – there is more than one type of Spanish?

When you’re learning a language, usually it’s pretty obvious when you’ve got the lingo down.

You can watch TV, order in restaurants without hesitation, and there are none of those embarrassing incidences of playing charades in the pharmacy.

Sometimes, however, even the most fluent speakers can get a couple of nasty surprises. One of them being those occasions when you meet people from elsewhere.

Like when you’ve put weeks and months of effort into sounding natural, only to find out that the dialect and colloquialisms you’ve learned are used only as far as the next town, and that the rest of the country can’t understand a word you’re saying.

The Canary Islands (which include Tenerife, Gran Canaria, Fuerteventura, Lanzarote, La Gomera, La Palma and a few teenier ones) are no different.

For those of you who speak perfect Castilian Spanish (that’s the language of the mainland, excluding Catalonia) you might be in for a surprise when you hear some of the words and phrases employed on these super sunny islands.

Luckily, this dialect, so similar to that of Latin America, is considered infinitely sexy by those on the mainland, so once you’ve mastered it, its soft, sensual appeal will have the locals on the mainland swooning.

First of all, Canarian Spanish does not used ‘vosotros’ for the plural form of ‘you’. When speaking to a Canary Islander, use ‘ustedes’ instead. (This applies to all of the islands, except for La Gomera and La Palma, for some reason!)

Examples: ‘Son más fuertes que ustedes‘. They are much stronger than you!

Secondly, the ‘th’ sound that is so common in Castilian Spanish when pronouncing the letter ’c’ or ‘z’ is instead pronounced with an ‘s’, like in South America. It gets easier once you’ve practiced.

Examples: ‘Cenar‘ and ‘zapato‘. These become ‘senar’ and ‘sapatos’ in spoken Canarian.

A third thing to bear in mind is Canarian speakers tend to use the past tense e.g. ‘I did’ rather than the perfect tense ‘I have done’.

In Castilian Spanish the word ‘de’ is used in phrases to describe possession, so you might see signs saying ‘Casa de Marta’ to mean ‘House of Marta’. On the Canary Islands they usually omit this, so it’s shorter: ‘Casa Marta’.

When visiting or travelling around the islands, you might be surprised to hear the use of unusual English words.

They’re obviously used with a Spanish accent, so aren’t exactly the same as their counterparts in English, but are definitely recognisable (sometimes thankfully so when you’ve been struggling to find the right word for ten minutes…)

Examples: ‘knife’, which is pronounced ‘naife’ in Canarian Spanish. Even words such as “quinegua” for potato come from English; it’s a shortened version of ‘King Edward’, whose seeds were imported in to the islands. 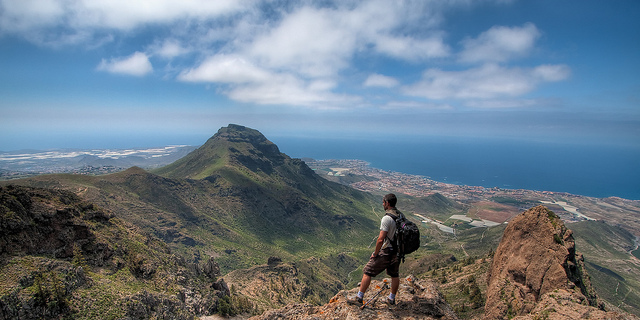 In general, the Spanish-speaking inhabitants of the Canary Islands run words together, creating shorter sentences that can be difficult (at first) to understand.

Listening practice will make this a breeze – sit in coffee shops, listen in on conversations, keep the TV on while you’re busy with other chores; you will soon pick it up.

One final difference is the vocabulary itself. If you want to sound like a true Canary Islander then pick up a few of the following and use them in your daily conversations. These are guaranteed to impress the locals:

Fisco or fisquito
= a small amount or little bit

Fos
= when you smell something terrible

Chacho
= to express surprise (it’s a shortened form of Muchacho)

Learn Spanish In The Canary Islands?

Each island has its various pros and cons when it comes to Spanish language schools. For learners it’s often more productive to steer clear of the bigger locations where English is more prevalent, as you’re more likely to receive a response in English even on occasions when you initiate conversation in Spanish.

However, as the number of language schools in more populated areas is generally higher, prices are lower. It’s a no-win situation!

Some schools that come with good recommendations are: the Gran Canaria School of Languages in Las Palmas de Gran Canaria, which offers courses for all levels at quite reasonable prices (around 170 euros per week).

Or for those going to Fuerteventura, the Fuerteventura Spanish School in Puerto Del Rosario runs 20 small classes per week for 195 euros. The bonus of this location is its proximity to the airport and also of nearby areas such as Caleta de Fuste which has some really water sports, beaches and museums (see here for more details on that).

Finally, La Gomera is the most untouched of the islands, if you’d prefer to get out into the sticks (there are some great pictures available on this site).

Though most people head over for the year round sun, the Canary Islands have a lot more to offer than just sea, sand and cheap sangria.

The great thing about studying or living in the Canaries is the opportunity to learn about the different invaders and influences who have shaped the island and its
language (and, of course, the constant source of paella within easy reach).

It’s only 2-3 hours from the UK by plane, and with cheap flights from RyanAir and EasyJet, it’s one of the cheaper destinations for a quick break in Europe.

Ready to head off? Pack me in your suitcase…

Hollie Mantle is a Londoner who lived in Japan for three years. She's a self-professed terrible Spanish speaker, an okay Japanese speaker and is currently trying to grasp a little bit of Korean!