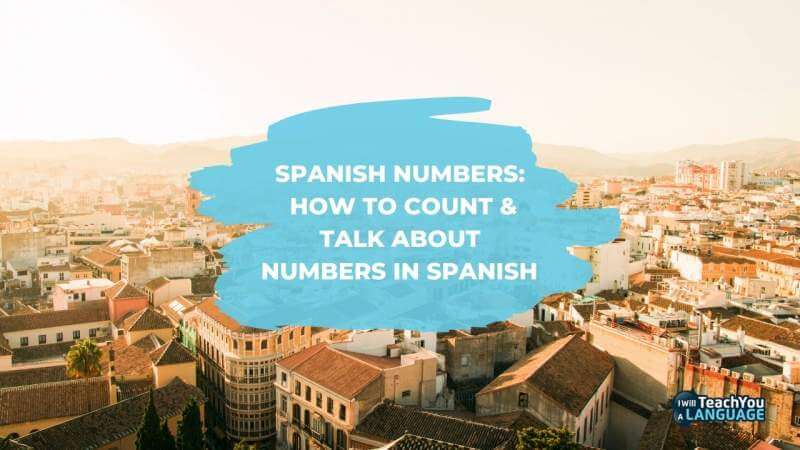 Spanish Numbers: How To Count And Talk About Numbers In Spanish

When you learn Spanish, or any other language, one of the first things you learn is how to count to 10.

In fact, counting is one of the first things most of us learned in our native language as well. That's because being able to use numbers is a vital part of describing our lives and world.

The same concept is true when you are learning a second, or third, language. Pretty early on in the process, you will want to be able to use numbers in conjunction with the words you are learning to specify how many of something you have, need, or see.

Numbers are also useful in telling time and giving specific dates—all things you will want to be able to do as you immerse yourself in this new language.

Before we jump in with the actual Spanish numbers, it will help to know a little bit about the different kinds of numbers used in English so that you have the right understanding moving forward.

By the way, if you're getting started in Spanish and want to go from beginner to intermediate fast, I recommend Spanish Uncovered. It's my story-based course that will get you to conversational fluency fast, without getting bogged down in grammar.

Cardinal vs. Nominal vs. Ordinal Numbers

As with English, Spanish has both “cardinal,” “nominal” and “ordinal” numbers (numeros cardinales, nominales y ordinales).

While you probably won't need to know the names of number types in your day-to-day conversations, it can be helpful to understand the difference as you learn how to use numbers in Spanish.

Nominal numbers don't actually represent a quantity or measurement of any kind. Instead, nominal numbers are used on their own as a name or category. (You probably recognized that the “nom–” beginning of the word is very similar to “nombre.”)

Ordinal numbers are the numbers used to put things in orders or ranks:

In Spanish (as in English), cardinal and nominal numbers use the same word (for example, “one” or “nine”), whereas ordinal numbers have a completely different vocabulary (“first” or “ninth”).

If you are just starting out with learning numbers in Spanish, you'll want to start with the cardinal numbers—numbers that denote quantity. Or in other words, the words you use to count.

In Spanish, the most important numbers to learn are the first 15. Once you can count to 15, you will be able to master the rest fairly quickly because 1-15 are the foundation for every other number.

If you glanced ahead, you may have noticed that I've actually listed 16 numbers below. Unlike numbers 1-15, zero is rarely used for anything other than itself.

You'll still benefit from learning zero early on, however, because it is very common in everyday communication.

Although zero is regularly used as a nominal number (as part of a telephone number or address, for example) instead of to denote quantity, it's easy to learn with the rest of the first 15.

After 15, a pattern emerges that makes it very easy to learn your numbers all the way up to 99.

Use The Natural Pattern In Spanish To Master Numbers 16-99

In English, after the number 19, we start constructing numbers with two parts: the tens value and the ones value.

For example, 20-29 all start with the same first word, “twenty.” We use that same pattern on up into the hundreds, thousands and more. Spanish is the same way, but the pattern begins at 16:

Fairly simple, right? Starting at 30, the spelling actually becomes even easier. Instead of adding the two parts of the number together (veinte + dos = veintidós), you simply add “y” between the separate words.

The pronunciation is the same either way but do watch out for the difference in spelling for 16-29 for times when you have to write out the whole word.

That's it! For any number from 30-99, simply start with the desired tens value and tack on an y plus the ending:

As with “uno” by itself, numbers ending with uno drop the “o” before masculine singular nouns:

Onto 100 And Beyond In Spanish

Spanish numbers follow the same basic pattern after 100 with a few notable differences:

The word for 100, ciento, is shortened to cien before nouns and other numbers but keeps its full form in other uses.

Hundreds are also modified to match the gender of the noun they modify:

It is worth noting that cien is sometimes used when you would expect ciento, especially in informal Spanish.

That means once you learn your cardinal numbers, there's only 10 numbers left to learn:

Ordinal numbers agree in number and gender with the nouns they modify. In the case of primero and tercero, drop the final “o” before masculine singular nouns:

While there are words for ordinal numbers past 10, they are not commonly used. As you get more confident in Spanish, you can double back and learn those words if you would like. Using cardinal numbers for 12th on up is perfectly acceptable.

In a pinch, you should be able to intuit what is being said by the root of the word (“octogésimo” for “eighty,” for example) if someone uses a word you are unfamiliar with.

Here are a few final notes on numbers and number usage that will help you in your quest to master Spanish numbers.

Most Spanish-speaking countries use a decimal to separate groups of 1000 and a period before decimals. Depending on your native language, this may be familiar to you or may be the opposite of how you are used to separating numbers.

As in English, ordinal numbers have special abbreviations in Spanish. There is nothing wrong with writing out the words, but you should be familiar with these abbreviations so you aren't confused when you see them.

The way the number is abbreviated depends on whether the number is singular, plural, masculine or feminine. Once you understand the pattern, however, the system is quite simple:

Fractions are most commonly written with the actual number. If you need to spell out the word, however, use this table as a guide:

It is also important to know that years are stated as cardinal numbers. Telephone numbers, which are nominal, are generally given in sets of two:

Spanish Numbers: Putting It Into Practice

Even with all the many details that go into mastering Spanish numbers, the basics are simple.

Once you've learned 0-15 and familiarized yourself with the pattern moving past 15, you will be able to express just about any number you need. As for the fractions, abbreviations, and ordinal numbers…those come with time and practice.

With a little revision and plenty of opportunity to hear and read authentic Spanish, you can feel confident using Spanish numbers fluently yourself.

As soon as you are comfortable with 0-15, don't let fear hold you back from jumping into conversations and using numbers in your conversations. The rest will come with time, exposure and experience!