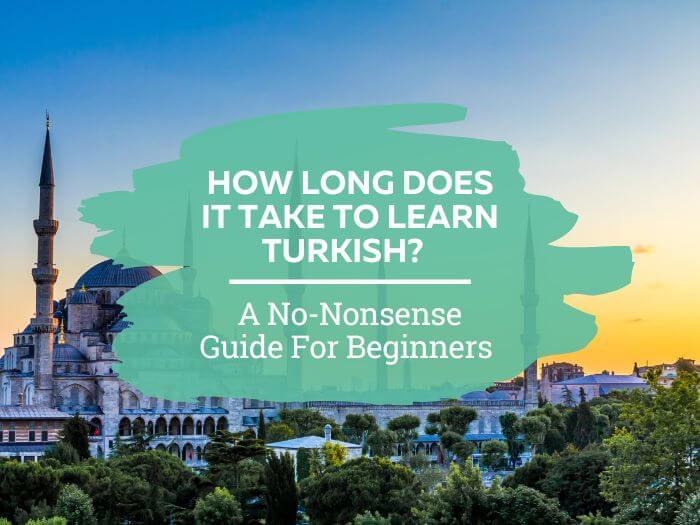 How Long Does It Take To Learn Turkish?

If you're ready to start your Turkish language learning adventure, then you're probably wondering – how long does it take to learn Turkish?

The challenge is that there’s no simple answer to the question – how long does it take to learn Turkish? That’s because the time it takes to learn any language depends on a variety of factors specific to you, your environment, and your previous experiences.

What are those factors, you might ask? Let’s dive straight into what those reasons might be in this article and try to answer the question for you!

By the way, if you’re thinking about learning Turkish, I’d highly recommend Turkish Uncovered – an online course that teaches you Turkish through StoryLearning®.

Turkish Uncovered makes it simple to learn Turkish through stories by adopting the unique StoryLearning® approach, allowing you to skip other traditional and often boring methods of learning languages.

It’s as fun as it’s effective. Click here for a 7-day FREE trial and start today!

How Long Does It Take To Learn Turkish? 6 Factors To Consider

So let's try to answer the question, how long does it take to learn Turkish? Here are six factors to consider:

1. Why Do You Want To Learn Turkish?

Your motivation for learning Turkish is probably the most important factor that determines how quickly you might learn the language. Why is that, you might ask?

Learning a language is never easy and takes a lot of time, dedication, effort, and investment. Having said that, the more motivated you are to learn Turkish, the more likely that you’ll overcome any of the other factors affecting how quickly you'll become fluent.

One of the main factors that determines how long it might take to learn Turkish is your own native language. How similar or different is your native language from Turkish?

If you’re a native English speaker, then it’s good to keep in mind that Turkish is considered one among a list of many languages categorised as “hard languages” on the basis of their linguistic and cultural differences from English.

Because of this, it might take a bit longer for you to learn Turkish than others who are native speakers of languages that are more similar to Turkish.

For example, if you’re a native speaker of another language that's linguistically similar to Turkish, like Azerbaijani, Turkmen, Kazakh, or Kyrgyz, then you’ll likely pick up Turkish far more quickly than others.

That’s because these languages share a lot of loan words and daily expressions with one another from being historically and culturally interrelated with one another. Check out this post on Turkish language history for more on the languages that have influenced Turkish.

3. Have You Learned Other Languages In The Past?

Why is that? Well, learning a language is like training a muscle. The more you work at it, the quicker your brain gets at developing new connections and signals that are critical for learning languages.

In fact, some studies suggest that people who grew up speaking more than one language at home are more likely to have an easier time learning a new language.

4. How Much Time Do You Have On Your Hands?

Inevitably, the more time and effort you spend on learning a language, the more likely you’ll become proficient in the language in a shorter period of time.

At the same time, this also means that depending on how proficient you want to get in Turkish, the more time it’s going to take.

In either case, while you might ultimately reach your end goal of becoming fluent in Turkish, dedicating more time and effort to learn it on a daily basis will help you reach that goal faster.

5. How Exposed Are You To The Turkish Language?

Are you hearing or practicing Turkish every day? Or are you only exposed to Turkish through the classes you attend?

The extent that you are immersed in a Turkish-speaking environment will also have an impact on how long it takes you to learn Turkish.

The more immersed you are in an environment where Turkish is spoken, the more likely you are to learn Turkish more quickly.

For example, if you’re living and working in a country like Turkey where Turkish is the native language, you may find yourself picking up Turkish more quickly than if you were living in another place.

But since not everyone lives in or works in Turkey, how can you raise your level of immersion in Turkish?

Fortunately, there are tricks to spending more time in your daily routine for learning Turkish so that you can be more immersed. That’s the great thing about learning a language – any type of exposure, especially reading stories, will help you become more proficient!

What are these tricks, you might ask? Here are a few ideas:

6. What Level Of Turkish Fluency Do You Want?

At the same time, to answer the question of how long it takes to learn Turkish, it’s worth asking another entirely different question: what exactly does it mean to “learn Turkish”?

It’s worth asking because what you think it means to “learn Turkish” can be different from the perceptions of other people. The important thing is, what does it mean for you?

Luckily, there are existing standards for assessing what it means to be fluent in Turkish. For example, the Common European Framework of Reference for Languages divides your level of fluency in a language into six levels:

So in summary, the more fluent you want to get, the longer it’s going to take to learn Turkish.

Regardless, if you’re looking to be able to manage fluent conversations on your own, or express yourself and your thoughts spontaneously, you’ll likely want to aim at somewhere between the B2 and C1 levels.

So…How Long Does It Take To Learn Turkish?

Now that you’ve considered all of these factors, let’s get back to the question at hand: how long does it take to learn Turkish?

Well, the United States Foreign Service Institute (FSI) estimates that it takes about 1,100 class hours to become fully proficient in Turkish. This means reaching a level of C2 based on the CEFR.

The important thing to keep in mind here is that the number of hours are an estimate of the number of class hours for becoming fully proficient. Because of this, the factors we explored earlier will influence how much longer or shorter it might take to learn Turkish.

But if your goal in learning Turkish is to become a fluent speaker, and you’re not bothered by the need to be fully proficient in reading complex or specialised texts (for example, reaching a B2 level instead of a C2 level), this might mean somewhere between 450-490 hours of class time.

While the number of estimated hours is important to keep in mind, your motivation for learning Turkish will ultimately determine how quickly you pick it up. At the end of the day, with enough perseverance, you’re sure to become fluent in Turkish!

No matter how long it takes you to learn Turkish, there is nothing more rewarding than learning a new language, and you can treat it as a lifetime of learning.

After all, even the most proficient speaker might have new words that they’re just encountering even years after starting to learn Turkish!

By the way, if you’re just getting started in learning Turkish, rather than learning Turkish through repetitive grammar exercises, did you know that you can learn by reading and listening to stories in Turkish?

You can get started by applying the rules of StoryLearning® and reading Turkish books for beginners – it's much more fun and motivating than staring at grammar tables!